Measure would curb bargaining on health care. The push in Massachusetts was led by Democrats who have traditionally stood with labor to oppose any reduction in workers’ rights. 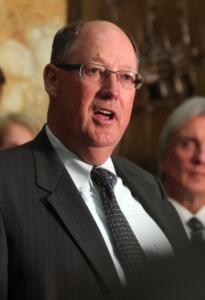 House lawmakers voted overwhelmingly last night to strip police officers, teachers, and other municipal employees of most of their rights to bargain over health care, saying the change would save millions of dollars for financially strapped cities and towns.

The 111-to-42 vote followed tougher measures to broadly eliminate collective bargaining rights for public employees in Ohio, Wisconsin, and other states. But unlike those efforts, the push in Massachusetts was led by Democrats who have traditionally stood with labor to oppose any reduction in workers’ rights.

Unions fought hard to stop the bill, launching a radio ad that assailed the plan and warning legislators that if they voted for the measure, they could lose their union backing in the next election. After the vote, labor leaders accused House Speaker Robert A. DeLeo and other Democrats of turning their backs on public employees.

Yet one more betrayal by the Democrats. How many betrayals will it take for the American people to see the problem is systemic?  That the difference between the two parties is an illusion based on differences of style and levels of hypocrisy?

“We are going to fight this thing to the bitter end,’’ he added. “Massachusetts is not the place that takes collective bargaining away from public employees.’’

The battle now turns to the Senate, where President Therese Murray has indicated that she is reluctant to strip workers of their right to bargain over their health care plans.

DeLeo said the House measure would save $100 million for cities and towns in the upcoming budget year, helping them avoid layoffs and reductions in services. He called his plan one of the most significant reforms the state can adopt to help control escalating health care costs.

“By spending less on the health care costs of municipal employees, our cities and towns will be able to retain jobs and allot more funding to necessary services like education and public safety,’’ he said in a statement.

The first concession gives public employees 30 days to discuss changes to their health plans with local officials, instead of allowing the officials to act without any input from union members. But local officials would still, at the end of that period, be able to impose their changes unilaterally.

The modifications bring the House bill closer to a plan introduced by Governor Deval Patrick in January. The governor, like Murray, has said he wants workers to have some say in altering their health plans, but does not want unions to have the power to block changes.

But union leaders said that even with the last-minute concessions, the bill was an assault on workers’ rights, unthinkable in a state that has long been a bastion of union support. Some Democrats accused DeLeo of following the lead of Governor Scott Walker of Wisconsin and other Republicans who have targeted public employee benefits. “In the bigger world out there, this fits into a very bad movement to disempower labor unions,’’ said Representative Denise Provost, a Somerville Democrat who opposed the bill.

Under the legislation, mayors and other local officials would be given unfettered authority to set copayments and deductibles for their employees, after the 30-day discussion period with unions. Only the share of premiums paid by employees would remain on the health care bargaining table.

Geoff Beckwith, executive director of the Massachusetts Municipal Association, said that, even if the bill becomes law, municipal workers would still have more bargaining power over their health care plans than state employees. “It’s a fair, balanced, strong, effective and meaningful reform,’’ he said.

Unions lobbied to derail the speaker’s plan in favor of a labor-backed proposal that would preserve collective bargaining, and would let an arbitrator decide changes to employee health plans if local officials and unions deadlock after 45 days. Labor leaders initially persuaded 50 lawmakers, including six members of DeLeo’s leadership team, to back their plan last week. But DeLeo peeled off some of the labor support in the final vote.

Representative Martin J. Walsh, a Dorchester Democrat who is secretary-treasurer of the Boston Building Trades Council, led the fight against the speaker’s plan. In a speech that was more wistful than angry, he recalled growing up in a union household that had health care benefits generous enough to help him overcome cancer in 1974. He said collective bargaining rights helped build the middle class.

“Municipal workers aren’t the bad guys here,’’ he said. “They’re not the ones who caused the financial crisis. Banks and investment companies got a slap on the wrist for their wrongdoing, but public employees are losing their benefits.’’

The timing of the vote was significant. Union leaders plan today to unleash a major lobbying blitz with police officers, firefighters, and other workers flooding the State House. Taking the vote last night at 11:30 allowed lawmakers to avoid a potentially tense confrontation with those workers, and vote when the marble halls of the House were all but empty.

The Lobby Cancer at the Core of American Politics

Biden’s move to impose a DHS board to...