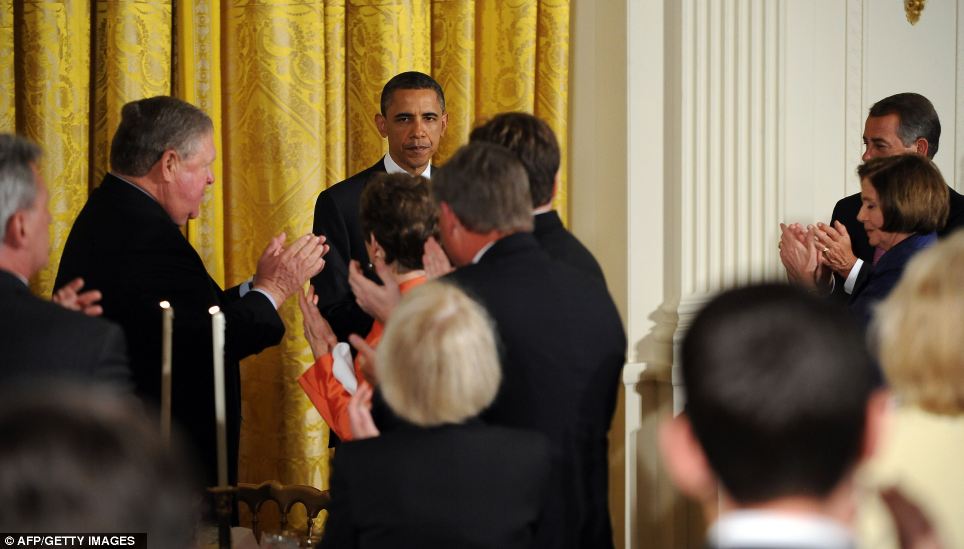 OBAMA is certainly living the thug life, an international gangster without parallel. What is to lesser humans a planet is, to Obama, a spherical theater of war, a free-fire zone. With two more notches in his gun, the First Black President is ensuring that Black Americans will be viewed as just another brand of ugly, violent Americans set loose on the world. And “the Peace Prize winner will once again give a lofty, well written speech about why it makes no sense to be peaceful.”

“Extrajudicial killing is now the rule, and not the exception for the United States.”

Barack Obama was trying for a double homicide this weekend. He hoped to kill both Muammar Gaddafi [7] and Osama bin Laden [8] in one fell swoop. Bin Laden’s luck ran out, but Gaddafi used up another of his nine lives and survives while his son and three of his grandchildren are dead, killed in a NATO attack on their home.

The United States government murdered members of Gaddafi’s family in a blatant violation of American and international law. The peace prize laureate is in fact a typical American president, using lies and outright thuggery in order to promote the dictates of the American empire.

That empire is on its way out, but the final demise may take years, or decades, and the raw power of American military might well continue to bring devastation to the world. The Gaddafi family and Osama bin Laden are but the latest victims in the body count.

Not only were these killings assassinations and therefore illegal under American law, but they play a terrible role in promoting beliefs in exceptionalism and exceptional suffering. Judging from the gloating and celebration invoked by bin Laden’s death, one would think that Americans were completely innocent of bringing bloodshed to any part of the world.

“One would think that Americans were completely innocent of bringing bloodshed to any part of the world.”

The Obama administration is not quite so ham fisted as the Bush regime, but Muammar Gaddafi has taken on the role played by Saddam Hussein. Just last year, we were assured that Gaddafi was a friend and an ally of the United States, and that the Reagan era attempt to kill him was a long distant memory, never to be repeated because Gaddafi was now on the good list of foreign policy makers.

How times have changed. Last month Obama, British prime minister Cameron, and French president Sarkozy issued a joint statement which said in part, “Colonel Gaddafi must go, and go for good.” Well, killing someone certainly insures they are gone for good, and the three intended to make good on that threat.

Extrajudicial killing is now the rule, and not the exception for the United States. Not only that, but our court system, which in the pre-Bush days were used for terrorism trials, are now off limits politically. When the Obama administration briefly planned to try Khalid Sheik Muhammad in New York, all hell broke loose. New Yorkers were told, falsely, that their lives would be at risk and their city would have to shut down. Of course, the expense would have been great, but it would have been possible to carry out a civilian court trial had the Obama administration not knuckled under to pressure to ignore the rules of law.

Obama, the so-called change agent, has proven to be exactly like his predecessors. His poll numbers are high because he killed people in a far away place. One of the victims was a perpetrator of a crime against Americans, but had the country not fallen into such a lawless state, he might have been brought to trial in a courtroom. The United States is now less civilized than ever, and even if Obama had been inclined to do so, most Americans would howl and moan at the prospect of bin Laden receiving true justice. It is a pity. It would have been wonderful indeed for the United States to make even a small attempt to live up to the ideals it once followed. Even the Nazi leadership were tried in open court.

“The United States is now less civilized than ever.”

On Thursday Obama will go to the site of the old World Trade Center and make a speech about why he had to kill bin Laden and why it was right to do so. The Peace Prize winner will once again give a lofty, well written speech about why it makes no sense to be peaceful.

The carnival atmosphere is growing more awful by the moment. The corporate media (*link lies) immediately told the story of the bin Laden killing by repeating government lies about women used as human shields and has now descended into worship of the black ops, special, wonderful, very elite, calm, cool, collected and totally awesome troops who did the killing. CIA director Leon Panetta is even suggesting who should portray him in a movie. It would be easy to make fun of Panetta, but he knows of what he speaks. Hollywood will come calling and the only question remaining will be who will portray the peace prize winning killer president.

Margaret Kimberley’s Freedom Rider column appears weekly in BAR, and is widely reprinted elsewhere. She maintains a frequently updated blog as well as at http://freedomrider.blogspot.com. [9] Ms. Kimberley lives in New York City, and can be reached via e-Mail at Margaret.Kimberley@BlackAgendaReport.com.