The Pain in Spain

The Spreading Euro Crisis is Eloquent 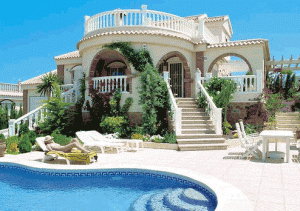 Spanish villa for sale: with the market softening, maybe a long wait.

When the current economic crisis hit Europe in 2008, small countries on the periphery were its first victims: Iceland, Ireland, and Latvia. Within a year it had spread to Greece and Portugal, though the GDP of both nations—respectively 11th and 12th in the European Union (EU)—are hardly central to the continent’s economic engine.

But now the contagion threatens to strike at the center of Europe. Spain, the fifth largest economy in the EU and 13th largest in the world, is staggering under a combination of debt and growth-killing austerity, and the balance books in Italy, the Union’s fourth largest economy, don’t look much better. Indeed, Italy’s national debt is higher than that of Greece, Ireland or Portugal, three countries that have been forced to apply for bailouts.

Spain is a victim of the same real estate bubble that tanked the Irish economy. In fact, house prices in both countries rose at almost exactly the same rate: 500 percent over the decade. A feeding frenzy of speculation, fueled by generous banks and accommodating governments, saw tens of thousands of housing units built that were never inhabited. There are currently 50,000 unsold units in Madrid alone and, according to the web site Pisosembargados, Spanish banks are on track to eventually repossess upwards of 300,000 units.

Bailing out Ireland, Portugal and Greece has strained the financial resources of the EU and the International Monetary Fund (IMF), but rescuing Spain would be considerably more expensive. If Italy goes—with an economy a third larger than Spain’s and more than twice as big as that of the EU’s three current basket cases—it is not clear the Union or its currency, the Euro, could survive.

Given the current tack being taken by EU and the IMF, that might not be the worst outcome for the distressed countries involved. The current formula for “saving” economies in Ireland and Greece consists of severely depressing economic activity that is likely to lock those countries into a downward spiral of poverty and unemployment that will last at least a decade.

First, it is important to understand that the so-called “bailouts” of Greece and Ireland, and the one proposed for Portugal, will not “save” those countries economies. As Simon Tilford, chief economist for Center for European Reform, points out, the money is being borrowed—at a high interest rate—to bail out speculators in Germany, France and Britain. It is German, French, British, and Dutch banks that will profit from these “packages,” not the citizens of Ireland, Greece, or Portugal.

Indeed, Portugal was forced to ask for a bailout, not because its economy is in particularly bad shape, but because speculators in other EU countries drove up borrowing rates to a level that the government could no longer afford. Rather than intervening to nip off the speculators, the European Central Bank sat on its hands until the damage was done, the government fell, and Portugal was essentially forced to sue for peace. The price for that will be steep: severe austerity, brutal cutbacks, rising unemployment, and a stagnant economy.

Spain and Italy are vulnerable to the same forces that forced Portugal to its knees, only they are far bigger countries whose economic distress will have global effects.

The current blueprint for reducing debt is to cut spending and privatize. But in a recession, cutbacks increase unemployment, which reduces tax revenues. That requires governments to borrow money, which increases debt and leads to yet more cutbacks. Once an economy is caught in this “debt trap,” it is very difficult to break out. And when economies do improve, cutbacks to education, health care, housing and transportation put those countries at a competitive disadvantage.

For instance, Spain has drastically cut its education budget, resulting in a wave of “early leaving” students—at a rate that is double that of the EU as a whole—and a drop in reading, math and science skills. Those figures hardly bode well for an economy in the information age.

The “cuts to solve debt” theory is being played out in real time these days.

When the Conservative-Liberal alliance took over in Britain, it cut spending $128 billion over five years, on the theory that attacking the deficit would secure the “trust” of the financial community, thus lowering interest rates to fuel economic growth. But retail sales fell 3.5 percent in March, household income is predicted to fall 2 percent, and projections for growth have been downgraded from 2.4 percent to 1.7 percent. In terms of British people’s incomes, this is the worst performance since the Great Depression of the 1930s. “In my view, we are in serious danger of a double-dip recession,” says London Business School economist Richard Portes.

As bad as things are in Britain, they are considerable worse in those countries that bought into the “bail out.” Ireland’s growth rate has been downgraded from an anemic 2.3 to a virtual flat line 1 percent, personal income has declined 20 percent, and unemployment is at 14 percent. Greece is, if anything, worse, with a 30 percent jobless rate among the young, an economy that is projected to fall 4 percent this year, and between 2 and 3 percent the next.

If Portugal—with an unemployment rate of 14 percent—takes the $116 billion bailout, it will torpedo what is left of that nation’s economy.

Even the managing director of the IMF seems to be taking a second look at this approach. Dominique Strauss-Kahn recently quoted John Maynard Keyes about the need for full employment and a more equal distribution of wealth and income. He also warned that bailing out the financial sector and focusing just on debt at the expense of the economy is a dead end strategy: “…the lesson is clear: the biggest threat to fiscal sustainability is low growth.”

Is this a serious change of heart by the organization, or does one needs to take the IMF director’s recent comments with a grain of salt? He is rumored to be resigning this summer to run for president of France as a Socialist. Hard-nosed market fundamentalism is not exactly the path toward heading up that particular ticket. And while Strauss-Kahn says one thing, the IMF’s board of directors—largely dominated by the U.S. Treasury Department—has yet to signal a change in course.

However, the director’s comments may reflect a growing recognition that “bailouts” that protect banks and their investors, while locking countries into a decade of falling growth and rising poverty, are not only politically unsustainable, they makes little economic sense.

The next step is debt restructuring, which means investors will have to take some losses—a “haircut,” interest rates will be lowered, and payments stretched out over a longer period of time. So far, Greece and Portugal are refusing to consider restructuring because it will affect their credit status, but in the end they may have no choice in the matter.

“The basic reality is that we cannot service our debt,” Greek economist Theodore Pelagid told the New York Times, “We don’t need another bailout, we need creditors to take a hit.”

Of course, there is always the Argentine approach: default. Faced with an astronomical debt burden, a stalled economy, and growing poverty, Buenos Aires tossed in the towel and walked away from the debt in 2001. “The economy shrank for just one quarter,” writes Mark Weisbrot of the Guardian (UK),”and then grew 63 percent over the next six years, recovering its pre-crisis level of GDP in just three years.”

So far there is no talk of defaulting by the financially stressed European countries, but the subject is sure to come up, particularly given the growing anger of the populace at the current austerity programs. Hundreds of thousands of people have poured into the streets of Athens, Lisbon and London to challenge the austerity-debt mantra, demonstrations that are likely to grow in the coming months as the full impact of the cutbacks hit home.

Iceland recently voted to reject a 30-year plan to pay British and Dutch banks $5.8 billion to cover their depositors who speculated on Iceland’s high interests rates. Britain and the Netherlands are threatening to block Iceland’s EU membership bid if it doesn’t pay up, but these days, threats like that might be treated more with relief than chagrin in Reykjavik.

The bailouts have had a devastating impact on European politics. Governments have fallen in Ireland and Portugal, and the Greek government is deeply unpopular. In essence, the demands of banks and bondholders are unbalancing democratic institutions across the continent.

Spain’s unemployment rate is 20 percent, the highest in Europe. If the EU and the IMF sells it a “bailout” similar to the ones Ireland, Greece and Portugal accepted, Spain’s “pain” will be long lasting and brutal.

And Italy—with its decade-long 1 percent growth rate—waits in the wings.

If Italy goes, the EU will be split between northern haves and southern have-nots. Can a house so divided long endure?

Conn Hallinan can be reached at: ringoanne@sbcglobal.net