Home ANNOTATED NEWS Italy’s role in the war on Libya

Italy’s role in the war on Libya 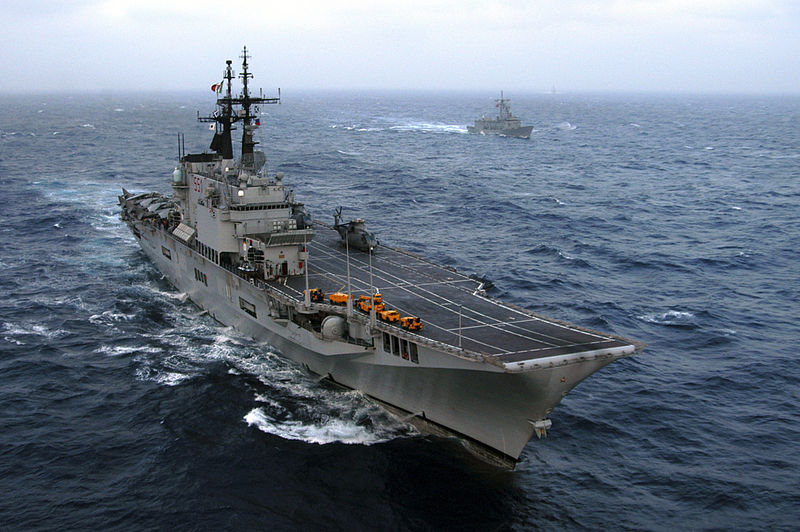 The Giuseppe Garibaldi, Italian carrier in the Mediterranean theater.

Italy has actively participated in the bombing of Libya since April 28. Day and night, Italian fighter jets take off from Birgi Trapani air force base in Sicily and from the aircraft carrier  Garibaldi, to drop their deadly cargo over the former Italian colony.

A few weeks ago, foreign minister Franco Frattini had said on his ministry’s web site that Italy should not participate actively in the war against Libya: “If an Italian aircraft bombed Libya and accidentally killed any civilians, the intervention would become counter-productive”. The Italian government feared comparisons with Italy’s 1911-1943 colonial rule over Libya, under both “democratic” and fascist Italian governments.

The decision to participate in the war despite this past took place after talks between Prime Minister Silvio Berlusconi and French President Nicolas Sarkozy on 26 April in Rome, over how to deal with African immigrants. Sarkozy and Berlusconi agreed “to reject any type of trade or transport of hydrocarbons that could benefit Gaddafi’s regime.” Immediately thereafter, the Italian prime minister announced that his country would participate actively in the war beginning 28 April.

Italy’s participation in the war stems from the fear that it could lose its influence in Libya to France, Britain and the United States. The Financial Times noted: “The Franco-Italian spat over immigration follows sharp differences over Libya, where Rome has been dragged into a war it would rather avoid, fearing a Paris-Benghazi nexus will freeze out its substantial interests in Libyan oil and gas”.

The Libyan oil and gas reserves are a powerful motive for the Italian bourgeoisie to participate actively in the inter-imperialist struggle over their North African neighbour. Italy draws a quarter of its oil imports and ten percent of its natural gas from Libya. The energy group ENI has invested billions of euros in assets in Libya. Until the outbreak of open hostilities, Italy was the largest foreign trade partner of Libya, the largest buyer of its crude oil, and one of Gaddafi’s largest arms suppliers.

The decision to participate actively in the war caused a few quarrels in Italy’s governing coalition. The Northern League justified its opposition by citing fears of an uncontrolled influx of African refugees should the war drag on. Gaddafi—who in recent years had prevented African refugees from crossing the Mediterranean, placing them in camps with Italian financial help—has threatened to let them emigrate in large numbers to Italy.

The Northern League also fears Italy could be dragged behind other European powers, especially France. Umberto Bossi, head of the Northern League, told the newspaperPadania: “We have become a French colony.” Italy’s constant giving in to the demands of Paris would have “serious consequences, he explained: “You don’t gain international importance by always saying yes.”

But the Northern League is careful to not to seriously jeopardize the government. It was appeased when it was proposed to put a time limit of three to four weeks on Italy’s participation in the war. The other NATO partners reject placing such a limitation on the war, however.

The strongest support for the war in Libya comes from Italy’s so-called centre-left opposition and their supposedly “left” periphery.

The largest opposition party, the Democratic Party (PD), which came out of the Italian Communist Party (CPI), enthusiastically supports the NATO war against Libya. On 23 March and on 4 May, the PD spoke out in parliament expressly supporting the NATO attacks.

During the 4 May sitting, PD leader Pier Luigi Bersani proposed a motion that obliged the government to “take any necessary initiative to ensure the specific protection of the civilian population.” This follows the wording of the UN resolution that gave the green light for the war. Bersani said: “We want to see if the majority is able to really enforce Italy’s commitment.” His motion was carried with a large majority, with the government coalition abstaining.

President Giorgio Napolitano, a former long-time CPI official, justified Italy’s participation in the war, saying: “We are not at war, the United Nations Charter contains a chapter, the seventh, which states that in the interest of peace, actions by the armed forces were allowed to suppress violations of the peace.”

Asked by the newspaper Il Manifesto to explain how this was compatible with Article 11 of the Italian constitution, which forbids waging war against other peoples, Napolitano said “Article 11 prohibiting war must be read correctly and be interpreted in context. If we participate in the operations against Libya under Resolution 1973 of the UN Security Council, Italy is not participating in a war and is not violating the integrity of other nations.”

Politicians such as Fausto Bertinotti (who led Rifondazione Comunista until 2006) and Nichi Vendola (Sinistra Ecologia Libertà), have supported for the Italian bourgeoisie. There is no one who knows better how to obscure the facts, providing a pseudo-“left” gloss for it as a “humanitarian mission” and the “defence of democracy,” than these masters of political deception.

Fausto Bertinotti wrote on his website that the anti-Gaddafi opposition must be defended. “Pacifism is not a concept that is set in stone,” he said, adding that it must be “flexible”.

In February, Nichi Vendola endorsed the National Transitional Council’s efforts to overthrow Gaddafi and welcomed UN resolution 1973 in March. Today, he is calling for a ceasefire and for humanitarian assistance under the control of the European Union.

The EU wants an intervention in Libya independent from NATO. With the EUFOR Libya mission, the EU stands “armed and ready” waiting for a request from the UN. The mission consists of two European battle groups, each with 1,500 men, and is under the command of an Italian rear admiral. The task of the EUFOR Libya mission would be to forcibly clear a “humanitarian corridor” into the contested area.

At the time of the Iraq war, Rifondazione Comunista, whose members also included Vendola, placed itself at the head of the anti-war movement. In Rome alone on 15 February 2003, three million people demonstrated under the slogan “No to war, with no ifs and buts”. Rifondazione, however, made sure that the movement would not threaten bourgeois rule in Italy. Today, however, Rifondazione and its successor play the key role in suppressing and disorienting the anti-war protests.

Military experts take less trouble to conceal the true nature of the Libya war. Andrea Nativi, director of the Rivista Italiana di Difesa military newspaper, said: “This is a war, and there is no war without deaths.”

Answering the position that the Italian operations should be directed only against specific military targets, Nativi argued for a broader selection of targets: “The more restrictions that are imposed, the longer the war will last, and the longer the war lasts, the more deaths there will be. This may seem cynical, but that is how it goes.” On the question of the use of ground troops, he said: “The plans are ready for this.”

The intervention has already caused great destruction in Libya. There have been daily rocket attacks for seven weeks. The media are silent on how many people, civilians or soldiers have been killed.

During the night of May 10, NATO again attacked the capital Tripoli and unleashed a three-hour murderous inferno. According to the official version, NATO’s mission is only directed at military installations in order to “protect Libyan civilians.” But civilian targets such as radio and TV stations and Gaddafi’s private residence have been attacked systematically.

The true character of the “humanitarian mission” is also seen in the fate of the refugees. Their lives, their health and their democratic rights are obviously not what is meant when it comes to the “protection of civilians”.

Many migrants die in the open sea on the dangerous crossing from Libya to Lampedusa. On 9 May, a boat was found that had drifted helplessly at sea for sixteen days. Of 72 aboard, according to a report by the Guardian, only eleven survived the horrific trip; 61 had died of hunger, thirst or exhaustion. As the survivors reported, each morning they found new dead bodies in the boat, “which we threw overboard after 24 hours.”

Not a single one of the NATO war planes and helicopters that fly over this area daily dropping their bombs for the “protection of civilians” saw the boat—so much for the “humanitarian” nature of the NATO mission and Italy’s participation in it.

We would like to acknowledge our debt to the World Socialist Web Site for this material.