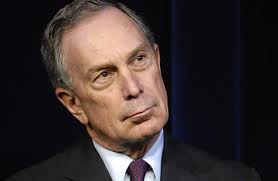 Mike Bloomberg: Media tycoon, mayor of New York. The control of mainstream media by such people keeps the political consciousness of the American people confused and in thrall to the values of capitalism.

We often hear about the revolving door between big business and the agencies that are supposed to regulate them. This is extremely prevalent of course, but there is a sort of revolving door that I don’t think is focused on enough. This is the revolving door between government officials and media. Every time there is a war being discussed, whether it’s Libya, Iraq, Afghanistan, or whatever other country, the major corporate networks always trot out whatever Generals they happen to be paying to drum up support for the war.

Anti-war activists obviously do not exist according to the corporate media, as they are never brought on to debate the Generals. To use another relevant example CNN had a segment after Bin Laden’s death on how to become a Navy Seal. On one of their “straight news” programs, they were doing a commercial for the military.

I have nothing against people serving in the military and respect them, but is it the media’s job to get people to join the military? When 1 in 3 homeless people are veterans, not mentioning the thousands of Americans who died in illegal corporate- driven wars, is the media’s job to convince more people to join? Shouldn’t the media be the ones yelling out these statistics instead?

Senator Joe Lieberman, along with several Republican candidates for President, are expected to join Glenn Beck’s Israel rally. This should really shock people, not because it’s Glenn Beck, but for politicians to be attending rallies held by members of the media (or political pundits), just shows you that the media is too close and too comfortable with government officials. Many Politicians have monetary interests in the media companies, John Kerry has millions of dollars in media companies (including Murdock’s News Corp.).

So we don’t have state media, but politicians own major stakes in the media? What is the difference?

You don’t need state media when you have the corporate ruling class owning practically all the mass media.—Eds

Well there really isn’t any. The mayor of New York has his own media company, and has his writers taking pot shots at his critics. There was a telling piece in the Atlantic that showed howCambodian comedians were basically propagandists for the government, mocking opposition groups, and performing for troops. Perhaps that doesn’t seem shocking, and it really shouldn’t because entertainers have become basically the same here in America.

Former FCC commissioner Henry Rivera has not only walked through the revolving door to work for T-Mobile, but Politico allowed him to write an op-ed for them to promote the merger of AT&T and T-Mobile, without mentioning the conflict of interest. Another FCC commissioner worked in the opposite way helping Free Press write an editorial form them. Even though I basically agree with the policy they were advocating for, it would be inconsistent to say that that is perfectly fine, while the other one is not. Instead there should be a strict separation between media and government.

And because I think that emphasizing corporations are authoritarian structures is just important as emphasizing that government is, its important to look at a recent story done that stated the obvious.“Right-wing” radio hosts like Hannity, Limbaugh, and Beck are paid to constantly defend and promote groups like Americans for Prosperity and Heritage. These groups are of course funded by oligarchs and corporations. Americans for Prosperity is funded by the Koch brothers and profoundly influences elections.

The media doesn’t represent views that are popular with the majority. Instead, it lauds views that are actually unpopular. Take the Medicare issue for example, while a plan to end or “reform” Medicare is very unpopular, the media eats it up and calls it “brave” or “sincere”. We have a broken corporate media obviously.

CLINT HULSEY is a young man from Texas who thinks.

NY Times admits it sends stories to US...

On the Ukrainian diaspora to Canada—Historical Amnesia and...

Nobody Sets Out To Become A War Propagandist....

Media Has Nothing to Say as Firefighters Battle...

Well said! If only the clowns who produce these so called news shows would read it, not that they would change their ways, of course, for they know the crap they put out.