Action Alert / A Dispatch from FAIR 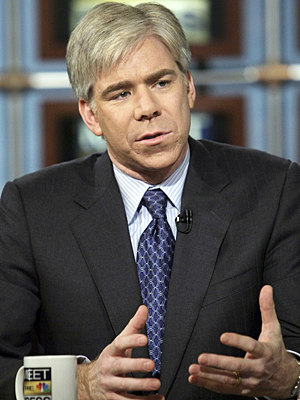 What's most irritating is that insufferable idiots—or is it ignoramuses?— like Gregory are the norm, not the exception. A situation that just happens to suit the status quo admirably.—Eds

Corporate media coverage of budget deficits and debt often turns to blaming Social Security and Medicare for being the real problem. NBC’s Meet the Press host David Gregory is especially fond of passing off such misleading claims as facts.

In a question to Republican Sen. John Thune, Gregory put it this way (7/31/11):
Senator, what’s really ludicrous to the American people, even when the American people don’t always speak with one voice on this matter, is that Washington is not really dealing with what really drives the debt, that’s entitlement spending. It’s been going on this way and was a ticking time bomb since the ’60s, and Democrats–like you were saying, “Hey, we can’t deal with Social Security and Medicare.”

Republicans, you know, sign tax pledges, “I’m not going to raise taxes.” Well, we can’t deal with revenues. I mean, this is what’s ludicrous to the American people. And even here, if we have a deal, we’re going to solve a political problem but not the underlying fiscal problem, which is what creates our debt, senator, no?

Like many reporters, Gregory wants to criticize both parties for being inflexible. But being “balanced” should not be confused with being correct.

For starters, “the American people” have been fairly clear about what they want to happen to entitlement spending. They do not want cuts to Social Security and Medicare in order to balance the budget. In a recent CNN poll (7/18-20/11), 87 percent of respondents came out against cutting Medicare in order to reduce the deficit–a position shared by 90 percent of Democrats and 85 percent of both Republicans and independents. With Social Security, 84 percent of all respondents opposed cuts. What’s “ludicrous” is Gregory’s contention that there’s widespread support for cutting entitlements.

A recent poll by Gregory’s own network found that even when given the choice between failing to reach an agreement on the debt ceiling and making cuts to Social Security and Medicare, only 38 percent of people surveyed thought Democrats should agree to cutting those entitlement programs (NBC/Wall Street Journal, 7/14-17/11).

Moreover, there is absolutely no evidence to support Gregory’s assertion that “entitlement spending” has been a “ticking time bomb since the 1960s” and is “what really drives the debt.” Social Security and Medicare have their own budgets and are supported by dedicated payroll taxes. Each has amassed massive surpluses over the past two decades, which they have loaned to the Treasury by buying U.S. government bonds. So in most of the time frame Gregory is talking about, entitlements have not contributed to the deficit at all, but rather have helped pay for it.

When the government pays back these loans–as it must, unless it borrowed trillions of dollars from working Americans under false pretenses–those payments will contribute to the deficit. But it makes no sense to think of the government paying back loans as Social Security contributing to the deficit. The government of China buys large amounts of Treasury bonds, and the U.S. government regularly pays this money back; if China uses some of this money to build highways, does that mean that Chinese highways are contributing to the U.S. deficit?

If paying off these bonds should be counted as anything besides simply interest payments, it would be the things that loans from Social Security and Medicare allowed the government to pay for–like a vast expansion of the military budget and generous reductions in tax rates for the rich (CBPP, 5/10/11).

Later in the program, Gregory returned to the same point:

To get an increase in the debt ceiling, they’re still going to leave unresolved some pretty tough questions about, are there going to be Medicare cuts, Social Security cuts. What are you going to do about the big drivers of the debt?

Such rhetoric is virtually indistinguishable from what one hears from Republican politicians–and Gregory has repeated it many times. On March 6, Gregory referred to the need to “fix budget-busting programs like Social Security and Medicare.”

On February 20, Democratic Sen. Dick Durbin was on the show and pointed out that “Social Security does not add one penny to the deficit.” Gregory appealed to his Republican guest, Sen. Lindsey Graham: “Senator Graham, is that…I mean, few people believe that there’s not an arithmetic problem with Social Security.”

When it comes to leadership, when it comes to the need to, you know, have no limit on cutting, don’t you think Americans understand what the problem with Social Security is? What will it take for you to join with the White House to make real reform to deal with this piece of the budget?

Thus Gregory outflanks the Republicans leader on the right to demand deeper cuts in Social Security and Medicare–and dresses up this position, opposed by huge majorities, as something “Americans understand.”

ACTION: Tell NBC’s David Gregory to stop misinforming viewers about the main causes of the federal deficit–and the solutions the public supports.

OpEds: The debt limit deal and the social counterrevolution in America

Obama & the Fake Debt Ceiling Crisis: This President Is Really Just Smarter Than You Are