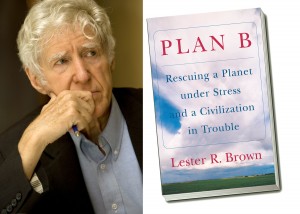 What started as a book has grown into a movement known as “Plan B” which presents a roadmap for achieving worldwide goals of stabilizing both population and climate. According to Lester Brown, author of the 2003 book, Plan B (and three subsequent updates) and founder of the non-profit environmental think tank, Earth Policy Institute, the plan is based on replacing the fossil-fuel-based, automobile-centered, throwaway economy with a new economic model powered by abundant sources of renewable energy.
Brown argues for transportation systems that are diverse and aim to maximize mobility, widely employing light rail, buses and bicycles. “A Plan B economy comprehensively reuses and recycles materials,” he says. “Consumer products from cars to computers are designed to be disassembled into their component parts and completely recycled.”

Plan B is an integrated program with four interdependent goals: cutting net carbon dioxide emissions 80 percent by 2020, stabilizing population at eight billion or lower, eradicating poverty, and restoring the Earth’s natural systems. Where Plan B really hits home is in the numbers: Brown puts realistic dollar values on the various aspects of his plan, and compares these costs with current military spending. Needless to say, restoring the environment and economy looks like a bargain when viewed against what the developed nations of the world spend on being ready for battle.

The beauty of Plan B is that it is feasible with current technologies and could well be achieved by 2020 with a concerted international effort. Brown reportedly wrote the latest incarnation of Plan B as a warning call for leaders of the world to begin “mobilizing to save civilization” given that time is more than ever of the essence. Luminaries from Bill Clinton to E.O. Wilson to Ted Turner have spoken highly of Plan B, and at least one university (Cal State at Chico) has made the latest version of the book (Plan B 4.0) required reading for all incoming freshmen.

Those looking for more up-to-date information on the evolution of the Plan B model and progress toward its goals should tune into the website of the Earth Policy Institute, the think tank started by Brown in 2001 and currently used as a central node in the growing network of thousands of entities and individuals around the globe supportive of making Plan B into reality. Prior to founding Earth Policy Institute, Brown was well known in environmental and policy circles for his work with the Worldwatch Institute, a pioneering environmental think tank he launched back in 1974.

War and shopping – an extremism that never speaks its name