What if the Tea Party Occupied Wall Street?

Editor’s Note: True to form, the corporate media have shamelessly ignored, swept under their bloodstained rug, the ongoing protests at Wall Street. In that they remind us that they are not there to serve us, but them—their oligarchic masters. 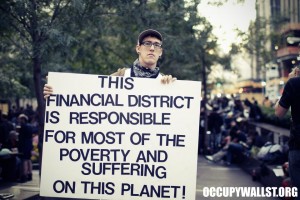 Too true to be news.

In an action called Occupy Wall Street, thousands of activists took to the streets of Lower Manhattan on September 17. The protests are continuing, with demonstrators camped out on the Financial District’s Liberty Street in support of U.S. democratization and against corporate domination of politics (Adbusters, 9/19/11).

But you wouldn’t know much about any of this from the corporate media–outlets that seem much more interested in protests of the Tea Party variety.
The anti-corporate protests have been lightly covered in the hometown New York Times: One piece (9/18/11) largely about how the police blocked access to Wall Street, and one photo (9/22/11) with the caption “Wall Street Protest Whirls On.”

The protests have been treated with brief mentions on CNN, like this one from host Wolf Blitzer (9/19/11): “Protests here in New York on Wall Street entering a third day. Should New Yorkers be worried at all about what’s going on?”

From the ABC, CBS and NBC network news, we could find nothing at all in the Nexis news database. On the PBS NewsHour (9/19/11), the protests got a brief reference, tacked on to the end of the stock market report:

Away from the trading floor, some 200 protesters marched for a third day, charging the financial system favors corporations. At least six people were arrested.

Some voices in the media have noted the lack of coverage. On the Rachel Maddow Show (MSNBC, 9/19/11), Michael Moore said, “People are down on Wall Street right now, holding a sit-in and a camp-in down there–virtually no news about this protest.”

So five days of clogging downtown Manhattan, protesting corporate control of the economy, and you haven’t heard a word about it on the news?

He later remarked, “If that’s a Tea Party protest in front of Wall Street about Ben Bernanke…it’s the lead story on every network newscast.”

The media preference for Tea Party gatherings over progressive activism is well-documented. A September 2009 Tea Party rally in Washington, D.C., garnered far more coverage than a similar gay rights rally the following month (Extra!, 12/09). Thousands of activists at the U.S. Social Forum in Detroit in June 2010 did not merit anywhere near the coverage accorded to 600 attendees at the Tea Party Convention in Nashville (Extra!, 9/10). The One Nation Working Together rally (10/2/10) brought thousands to Washington–but little media attention (FAIR Media Advisory, 10/6/10).

And even the size of a given Tea Party gathering does not seem to much matter. When about 200 Tea Partiers gathered in Washington earlier this year (FAIR Blog, 4/1/11), an account in Slate (3/31/11) noted, “There was at least one reporter for every three or four activists.”

The answer to the problem of non-coverage would seem to be simple: If the people occupying Wall Street want more media attention, they should just call themselves Tea Party activists.

ACTION:
Ask the nightly newscasts why they have decided to give little to no coverage to the Occupy Wall Street protests–especially given their interest in Tea Party demonstrations.

How the world changed after 9/11