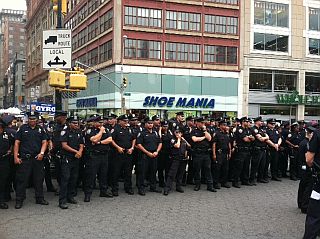 The Occupy Wall Street protest states its objectives: “to stop corporate greed and corruption on Wall Street and in our political process.”

The simple statement and the protest that expresses it appears a reasonable extension of contemporary political discourse, an announcement of complaints that has been voiced by presidential candidates and activists for decades. However, under capitalism, there is no way to remove greed and corruption from Wall Street, or to “get money out of politics.”

As for the first prong of the stated demands, ending corporate greed and corruption on Wall Street, one should only note what in fact Wall Street is and does. Wall Street is the exchange house of capitalist expropriation of value. Wall Street exchanges as abstract commodity in a worldwide marketplace profit extracted from the labor process. It also exchanges, through ever-growing layers of speculation, financial products that are further and further removed from the labor process, but which are nevertheless theoretically underwritten by it. Gains and losses on the market by buyers and sellers have to do with bets placed on the exchange value abstracted, however far removed, from labor.

Further, capitalism is in a state of systemic crisis. Its paroxysms are felt across the globe and in every locality thereof. Reforms of the FDR variety are being rolled back rather than extended. The era of “progressive” reformism is over and it is not going to return. This is clear if one looks at Europe, where age-old reforms are being undone in nation after nation. Some reform may be necessary and possible in China and India, but in the US and Europe, the political momentum is moving precisely in the opposite direction, and it will not be reversed by “demands” made on reformist terms. The levelling of the international workforce is the order of the day. Rather than curbing the appetite of the capitalist class, the political establishment, in both of its big business parties in the U.S., is involved in feeding it through attacks on the living standards of the vast majority. There will be no reforms of Wall Street that will not be beneficial to Wall Street itself, no matter how they are packaged by the political establishment. Further, the “instruments” of the speculative marketplace multiply faster than any regulators could possibly monitor.

As for the second prong of the demands: removing the influence of money from the political sphere would seem to be a noble and achievable goal. Although the political sphere is separated from the economic sphere by layers of mediation, it should be clear why under existing conditions money cannot and will not be removed from politics. By definition, the ruling class will always rule. And how does the capitalist class express itself politically, if not by means of capital itself? The capitalist class is not going to be hampered by demands that it not express itself politically, using all the means at its disposal. The means at its disposal are many and sundry and include the arsenal of media outlets, capitalist ideology, and the direct political peddling of corporate lobbies, among others. If one outlet is temporarily or partially blocked, the expression will take other routes and the ruling class’s interests will nevertheless be represented in the political establishment, which it controls. Given the vast reserve capital holdings of US corporations at present – over two trillion dollars – the ruling class has plenty at its disposal and its expression will not be denied – under existing conditions.

So where does this leave us with regards to Occupy Wall Street? One can rightly remark that the protest is idealist—but not simply in the sense of wearing rose-colored glasses. It is idealist in the sense that it fails to grasp a materialist conception of history. Despite its apparent linking of economics and politics, the protest fails to grasp the economic determinations of the political realm. And so it appears idealistic in the other sense – of demanding what it cannot, by definition, achieve. It lacks a coherent theory and thus its praxis is also flawed. As such, it embarks on an “occupation” that pits an army of police against its vanguard, and exposes that vanguard to police brutality, arrest, incarceration and long-term criminal branding. This is often the case for any political and social unrest under capitalism, but, given that it is not organized as labor, the movement’s demands are easily dismissed by the targets of the protest. No factory owner stands to lose productive capacity due to a labor strike. No Wall Street brokerage firm will be hindered in its trading operations. The protesters are not directly withholding productive capacity from the economic sphere, nor interrupting the exchange of its commodities. Thus, the protest will have no immediate effect on the political sphere. At most, the movement may be awarded a rhetorical nod by the political establishment, but even this appears unlikely.

Likewise, although it has significance as the legitimate expression of anger at the deteriorating political, economic and social conditions in the US and around the world, the premise of the Occupy Wall Street movement is incoherent and flawed. I am told by protesters and supporters that matters of theory and the eventual make-up of the political order can be resolved after the demands of the protest are met and the people, not corporations, are at the helm. But activity that is not grounded in sound theory is bound to fail. One needs an accurate theory of the atom in order to perform atomic fission. One needs a correct theory of the socio-economic and political realm to effect political change.

Occupy Wall Street and its partner protests elsewhere are nevertheless historically significant. The movement represents merely a slim layer of a much deeper and profound anger, disillusionment, and desperation within a growing segment of the population – a sense that the system is deeply flawed and that matters cannot go on as they are. Deep political and social turmoil is roiling the nation and the world. Mass unemployment, especially felt among the youngest workers; massive student debt; operative and incipient “austerity” programs; bailouts and tax hand-outs to the corporate sector; endless bankrupting, imperialist war and its intensification and extension by Obama—these are the matters motivating such expression. The unrest will grow in the coming months, and Occupy Wall Street will appear to have been a predictive symptom of a burgeoning revolutionary potential. This revolutionary potential, however, will remain just that, unless it is wedded to the mass of the workers and is guided by sound theoretical principles and the profound lessons of political history.

Michael Rectenwald is Chair and Chief Editorialist of Citizens for Legitimate Government. More of his writings can be found here and here.

The First of Many Cauldrons Form in the...