The L.A. TimesREPORTING FROM BEIJING— 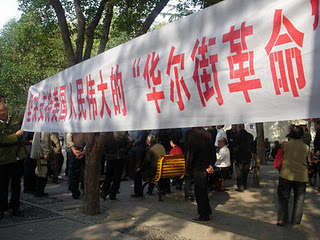 But the demonstrators may have crossed an invisible line with the Chinese Communist Party. Videos and pictures of the demonstrations were scrubbed from the Internet within days. Censors have selectively blocked discussion of Occupy Wall Street on social media websites and pared down coverage in the state-run press. “When Occupy Wall Street first happened, the Chinese government perceived this movement as a big victory for communism over capitalism,” said Wen Yunchao, a prominent Chinese blogger based in Hong Kong. Chinese media outlets initially carried news of the demonstrations with a readiness bordering on zeal.

An article last month in the English-language China Daily even lambasted American news outlets for downplaying the protests. “It is a shame that most so-called mainstream media outlets have miserably failed to inform the public over the past two weeks,” it said. That was before the movement went global, slowly transforming from an attack on Wall Street banks into a global stand against income inequality and corporate greed. Within the last few days, state-owned media have begun to significantly downplay the movement.

There is currently no mention of Occupy Wall Street on the website of the New China News Agency, the state news service. “I think the government wants to keep its distance from this event. You can take a look at CCTV; reports on this event have been scarce,” said Jin Canrong, a scholar at the Chinese Academy of Social Sciences, referring to the state broadcaster. Censors have also begun restricting discussion of Occupy Wall Street on Sina Weibo, a Chinese microblogging service similar to Twitter, but have stopped short of blocking it outright.

Searches for “Occupy China,” “Occupy Beijing” and “Occupy Shanghai” on the site bring up a message that typically appears when content has been censored by the government: “According to relevant laws and policies, search results have not been shown.” A group of scholars associated with the Utopia Forum, a leftist website without any connection to the Henan demonstrations, published an open letter in support of the American protesters earlier this month. “The Communist Party is the pioneer of the working class,” said Fan Jinggang, the forum’s manager, in a telephone interview. “Obviously, we have to support the righteous protests of people in other nations.”

The Zhengzhou demonstration, as well a similar demonstration soon afterward in Luoyang, another city in Henan province, have been China’s only documented gatherings in support of the Occupy Wall Street movement. The worldwide demonstrations come at a time when China is suffering from many of the same economic ills as the western countries. The income gap has widened dramatically. Speculative home buying has led to rapid inflation within the past year, closing average citizens out of the housing market and triggering fears of social unrest. “One percent of American people own 90% of the wealth. One ten-thousandth of the Chinese people own 90% of the wealth. In the end, who should have a revolution? Which street should be occupied?” wrote Wu Xianjian on his Sina microblog last weekend.

Editor’s Note:  The “one percent” quoted above, to contrast it with the substantially more acute inequality now prevailing in China is actually a figure of speech, an expediency for the sake of getting a point across that everyone can seize upon regardless of math ability. The American concentration of wealth is far denser than 1%, most likely in the order of 0.001, therefore almost the same as the Chinese figure. However, most political activists find speaking of a 0.001 (or worse) inequality / property ratio to rouse the masses a rather cumbersome procedure.

The Iraq War Ain’t Over, No Matter What Obama Says

Now Biggest Donor in all of US Politics,...