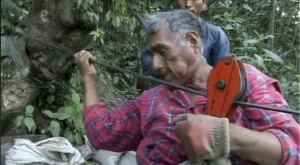 WE OFTEN FORGET what it means for people to inhabit a world in which superhuman effort and risk are necessary to survive day after day. Which makes the obscene distribution of wealth and technology all the more real to those of us intent on changing such ugly realities. These documentaries, part of the “Deadliest Journeys” series, being aired on Current TV, although not intended as political, carry an important message by simply showing such extreme conditions of life. Plus meeting our fellow humans, in all their dizzying complexity (their poverty and what some in the developed world would call “backwardness” do not diminish their intelligence and fascinating ways).

Watching this particular docu I was struck by the absence of some obvious questions: How did the cocaleros set up the lines across the valley? 1500 ft or more of heavy wire or cable is not to be sniffed at, so I presume a bunch of them carried them downhill and up the mountainsides…or maybe they used animals. It’s not explained, and it should have been. Second, in the age of President Morales, a former cocalero himself, it’s hard to understand how the Bolivian army  (or some charity) has failed to step up to modernize their wires and pulleys.  This is elementary stuff that requires—in our world—so little capital. The tough roads, on the hand, are more comprehensible.

My hat is off to the Bolivian cocaleros.
WATCH VIDEO BELOW

Editorial: Don’t forget the BP assault on the Gulf

Vulgar Capitalism in the Post-Industrial Age: Not a Pretty Sight