Home ANNOTATED NEWS Egypt: A Culture of Subjugation is Dying

Egypt: A Culture of Subjugation is Dying 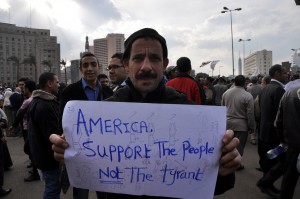 It is a gun battle people in the Shubra district in central Cairo still talk about six months after it happened. In a dispute over a piece of land he had seized amid the small shops and densely crowded streets, Mohammed Shaban, who had escaped from prison during the revolution, challenged the police to a fight. He told one policeman who tried to evict him “to get out or we will kill you”. When other police arrived, two of them were wounded by gunshots and Shaban was killed along with a local plumber, shot dead by police who mistook him for a gunman.

“Mohammed Shaban’s family consider him a martyr but nobody else around here does,” says Abu Hatem, a taxi driver living in Shubra. Not far away is the prison and police headquarters, a large, shabby, cream-colored building with steel bars outside the windows and metal plates on the inside, pierced by a single hole through which a rifle can be fired. The prison was burned on January 28  last year by prisoners like Shaban and their relatives at the height of the Egyptian uprising against President Hosni Mubarak. The prisoners seized arms and the police fled from Shubra, but have since returned.

The story of the death of Shaban is one of several told by people in Shubra as an example of increased violence in Egypt since the revolution. One man who went to the police to report the kidnap of his child was told by a policeman that “10 other children have been seized and are being held for ransom”. Car theft has become common. Many taxi drivers say they no longer dare to work at night.

Yet these tales of Egypt sinking into chaos are deceptive. There is more crime in Cairo than before the revolution because the police have been discredited by their corruption and brutality, can no longer act with impunity and often refuse to act at all. Poverty has increased in a city of 20 million people, a third of whom already lived in slums, so more will steal to survive.

The surprise is not that there is so much violence, but that there is so little. In Shubra people are frightened of chaos and criminality, but examples of violence like Mohammed Shaban’s shoot-out are still uncommon in a district into which are packed no less than three million Muslims and Copts.

Local people can point to only two shops looted during the revolution when the police disappeared from the streets. At one of them, selling beer and wine and called “Drinkies”, the owner said they lost their stock but were otherwise unharmed.

The increased fear of violence is in part psychological because Egyptian society is not used to it, says Magda Kandil, executive director of the Egyptian Centre for Economic Studies (ECES), and while there is more crime, “it is mostly about theft – 20,000 cars have been stolen”. The only place where there has been a general breakdown of order is in north Sinai where armed Bedouin carry out kidnappings and killings.

Compared to most Arab uprisings last year, such as those in Libya, Yemen and Syria, political violence in Egypt has been moderate. “Looked at historically this has been a remarkably peaceful revolution so far,” says Professor Khaled Fahmy, head of the history department at the American University in Cairo. “There has been no bloodbath.” But he adds that Scaf (The Supreme Council of the Armed Forces), the ruling authority over the last year, has encouraged an exaggerated perception of insecurity in order to blame the revolutionaries for increasing crime and a faltering economy.

At street level, going by what happened in Shubra, these tactics are having some success and the return of the police is generally welcomed. Abu Hatem says that the police are chastened and no longer plant drugs on suspects as they used to. He says one reason the police fled so fast during the revolution was that “the lower ranking police officers were afraid to appear in the streets because they believed people they had falsely accused might kill them”.

In the longer term, it may prove impossible for the army and police to restore the monopoly of power they enjoyed under the old regime. Egyptians retain a strong sense of hierarchy but power is fragmenting and the state is no longer absolute. The Interior Ministry in Cairo used to vet the promotion of everybody from judges to journalists. Even favorable mentions of the army in the press had to receive official permission.

But Cairo today is full of signs that this culture of subjugation is eroding. The street in which stands the enormous Interior Ministry building is sealed off by barbed wire and paramilitary police backed by armored cars. But at one end of the street former policemen sacked last year were this week demonstrating to get their jobs back and chanting: “Ministry of the Interior, we are your children, we are not thieves.” The Maspero building, where much of the state media is based, is ringed by barbed wire and defended by soldiers with machine guns, but this week its ground floor had been taken over by 600 striking engineers demanding higher pay.

The activists who packed Tahrir Square a year ago are dispirited and speak of the triumph of the counter-revolution. They fear that the army, police and intelligence services are re-establishing their authority. But power in post-Mubarak Egypt is divided and may become more so. The Muslim Brotherhood and military, who would like to keep a supervisory role, are engaged in a long-term struggle.

Everybody wants the revolution to improve their lives. Cairo bus drivers are on strike and have plenty to complain of. At the Moneib bus depot, Khalaf Sadk says: “I’ve worked on the buses for 16 years and I get 600 Egyptian pounds (£63) a month for working an eight- to 10-hour day.” Often he is unable to complete his route because of traffic jams and engine failure on his decrepit bus. Another striker, Khalaf Abdul Kadr, says the Public Transport Authority “has no respect for its employees or their needs.”

There is a deep cynicism about the motives and actions of the state among most Egyptians. For instance, there is a foot-and-mouth epidemic among cattle in Egypt, but butchers in Cairo believe that officials are exaggerating its extent because they stand to make money from a rise in the price of chicken and fish. Professor Fahmy says: “I think we are seeing a revolt against the modern Egyptian state system which was always against the welfare of Egyptians.”

The political struggle means that none of the centers for power are really in charge or capable of taking important decisions. And this is at a moment when the Egyptian economy is teetering on the edge of crisis. Magda Kandil at the ECES sees the economic prospects as “dismal”. She blames the authorities for pursuing populist policies, such as raising wages for state workers and stoking inflation. Central Bank reserves have fallen by more than half “and waves of capital outflow could be of the magnitude of $12bn”. The government has been locked in negotiations with the IMF for a $3.2bn loan on which further aid from the Gulf oil states depends.

The Egyptian state machine is vast but dysfunctional at every level. Education and healthcare are inadequate and under-funded. A quarter of Egypt’s 85 million people live in shanty towns. One-third of the government’s budget is spent on subsidies, mostly for fuel, which benefit the better-off. Cheap gasoline means the streets are choked with traffic. Bottled butane gas used for cooking by the poor is heavily subsidized but subsidies are almost all siphoned off by middle men.

The authority of the Egyptian military and police will ebb unless they stage a coup which appears unlikely. But, even if they are edged out of power, it will take a long time to reconstruct the country they ruined during their 60-year-long rule.

PATRICK COCKBURN is the author of “Muqtada: Muqtada Al-Sadr, the Shia Revival, and the Struggle for Iraq.

The AFL-CIO is in a Deep, Defensive Rut

Soleimani murder: what could happen next?

What Will The Trump Administration Do When Iraq...