Home ANTIWAR Damascus terror bombing: Made in the USA

Damascus terror bombing: Made in the USA

Bill Van Auken, WSWS.ORG
Thank you, WSWS.ORG
There’s simply no limit to the criminal hypocrisy of the American government. 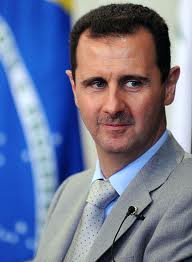 Syria's Assad: The imperialist noose keeps tightening and he may end up like Gaddafi.

“Our policy is to try to accelerate the arrival of that tipping point” at which the Syrian regime of Bashar al-Assad is toppled, Assistant Secretary of State Jeffrey Feltman explained last March to the US Senate’s foreign relations committee.

Thursday saw the latest incarnation of this policy. The devastating car bombs that slaughtered 55 people and left nearly 400 more wounded in Damascus mark a new stage in the criminal imperialist campaign for regime change in Syria.

Having hijacked the protest movement that began in Syria in March of last year in the bid to turn it into a vehicle for installing a client regime in Damascus, Washington went on to back the formation of the “Friends of Syria”, modeled upon a similar international formation used to prepare the war on Libya.

It declared the Syrian National Council, a collection of Islamist politicians from the Muslim Brotherhood and aging exile assets of various Western intelligence agencies to be the “legitimate representative” of the Syrian people and backed the formation of the so-called Free Syrian Army (FSA) to carry out armed attacks on Syrian security forces.

Washington’s closest allies in the Arab world, the dictatorial feudal monarchies of Saudi Arabia and Qatar, set up a $100 million fund to place FSA members directly on their payroll, while the US announced it was sending “non-lethal” aid to these same forces, including sophisticated communications equipment, night vision goggles and US intelligence.

None of this has had the desired effect. The FSA has barely put up token resistance to the Syrian military in most areas, and there is no sign of mass popular support for the Syrian National Council.

So now comes the turn to terrorist bombings. The explosions Thursday in Damascus were only the latest and most deadly in a string of bomb attacks over the past several weeks. On Friday, the Syrian government reported that it had foiled another suicide bombing, this one in the commercial capital of Aleppo involving a car loaded with a ton and a half of explosives.

The aims of this campaign are to terrorize the Syrian people and, together with the unilateral US and European Union sanctions, paralyze the country’s economy, creating conditions for a social and political implosion. At the same time, it is designed to prove that the United Nations cease-fire agreement brokered by former UN secretary general Kofi Annan is unworkable.

Only two days before the Damascus attacks, Susan Rice, the US ambassador to the United Nations, was dismissing Syrian warnings about foreign terrorists moving into Syria as a “diversion”, while insisting that Washington remained focused on regime change and would increase its “non-lethal” aid to that end.

As Rice put it, referring to the Annan plan, Washington was not “putting all our eggs in one basket”. It now appears that some of the “eggs” were actually car bombs.

After the Damascus bombing, the media initially gave a certain amount of credence to the preposterous claims of the Syrian National Council that the Assad regime had organized the attack itself, killing a significant number of its own security forces.

The State Department felt compelled to issue a pro-forma condemnation of terrorism, acknowledging that “spoilers” might have been involved in the attack, but insisting that the responsibility for the bombing lay “firmly at [the] feet” of its target, the Syrian regime.

Defense Secretary Leon Panetta Thursday acknowledged “an Al Qaeda presence in Syria,” while reiterating that the Pentagon has been assigned “to make all kinds of plans with regards to possible approaches in Syria. And if the president of the United States asks us to respond in particular ways, we’re prepared to do that.”

These plans, according to the Washington Post, include “military protection of corridors for humanitarian assistance to Syrian civilians or of a ‘safe zone’ where the opposition could organize, as well as an air assault on Syria.”

If Al Qaeda elements are collaborating with US imperialism in mounting a terror campaign in Syria, it will not be the first time. The top commander of the militias that were backed by the US and NATO in the war for regime change in Libya, Abdel Hakim Belhadj, had previously been abducted, renditioned and tortured by the CIA because of his role in the Islamist terrorist group.

These same Libyan elements are now playing a prominent role in arming and training the US-backed armed “opposition” in Syria as well as sending fighters directly into the country.

The cynical cold war cliché that “one man’s terrorist is another man’s freedom fighter” does not begin to cover the US role in Syria, where these elements fulfill both roles simultaneously. On the one hand, Washington is backing Al Qaeda-linked forces in a campaign to topple the Assad regime, while on the other, it is preparing to use their presence in the country as a pretext for US military intervention.

This found clearest expression in a statement by Anne-Marie Slaughter, the former policy planning director at the State Department and close adviser to Obama, who is one of the leading advocates of “humanitarian” imperialist interventions. National Public Radio quoted her as saying that ‘the presence of jihadist groups in Syria shouldn’t dissuade the US and its allies from intervening”, on the contrary, “it should wake them up to the dangers that a prolonged conflict in Syria could create.” She went on to warn that a “major threat” in Syria was that chemical weapons could fall into the hands of Al Qaeda.

Thus, the pretexts for the US invasion of Iraq are reprised in a perverse new form. The presence of Al Qaeda, backed by Washington, and the supposed existence of “weapons of mass destruction” in Syria must be answered with US military intervention.

The campaign to topple Assad, Tehran’s principal ally in the region, is meant to isolate Iran, which is viewed by Washington as a main obstacle to its assertion of hegemony over the oil rich and strategically vital regions of the Persian Gulf and Central Asia. Behind all the pretexts of Al Qaeda, chemical weapons, “democracy” and humanitarianism, US imperialism is preparing new wars of aggression which threaten horrific consequences throughout the Middle East and beyond.

Bill Van Auken is a senior activist/analyst with the Socialist Equality Party (SEP).

Who Knew: We’re Here Because We’re...