Home ACTIVISTS & HEROES Why Obama and Romney Will Compete to be Cheerleaders for U.S. Imperial Dominance

Why Obama and Romney Will Compete to be Cheerleaders for U.S. Imperial Dominance

Clearly, come November, whoever wins or loses, the national security state will be the true victor in the presidential sweepstakes. 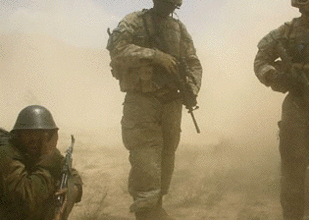 Now that Mitt Romney is the presumptive nominee of the Republican Party, the media is already handicapping the presidential election big time, and the neck-and-neck opinion polls are pouring in.  But whether President Obama gets his second term or Romney enters the Oval Office, there’s a third candidate no one’s paying much attention to, and that candidate is guaranteed to be the one clear winner of election 2012: the U.S. military and our ever-surging national security state.

The reasons are easy enough to explain.  Despite his record as a “warrior-president,” despite the breathless “Obama got Osama” campaign boosterism, common inside-the-Beltway wisdom has it that the president has backed himself into a national security corner.  He must continue to appear strong and uncompromising on defense or else he’ll get the usual Democrat-as-war-wimp label tattooed on his arm by the Republicans.

Similarly, to have a realistic chance of defeating him — so goes American political thinking — candidate Romney must be seen as even stronger and more uncompromising, a hawk among hawks.  Whatever military spending Obama calls for, however much he caters to neo-conservative agendas, however often he confesses his undying love for and extols the virtues of our troops, Romney will surpass him with promises of even more military spending, an even more muscular and interventionist foreign policy, and an even deeper love of our troops.

Indeed, with respect to the national security complex, candidate Romney already comes across like Edward G. Robinson’s Johnny Rocco in the classic film Key Largo: he knows he wants one thing, and that thing ismore.  More ships for the Navy.  More planes  for the Air Force.  More troops in general — perhaps 100,000 more.  And  much more spending on national defense.

Clearly, come November, whoever wins or loses, the national security state will be the true victor in the presidential sweepstakes.

Of course, the election cycle alone is hardly responsible for our national love of weaponry and war.  Even in today’s straitened fiscal climate, with all the talk of government austerity, Congress feels obliged to trump an already generous president by adding yet more money for military appropriations.  Ever since the attacks of 9/11, surging defense budgets, forever war, and  fear-mongering have become omnipresent features of our national landscape, together with pro-military celebrations that elevate our warriors [sic] and warfighters to hero status.  In fact, the uneasier Americans grow when it comes to the economy and signs of national decline, the more breathlessly we praise our military and its image of overwhelming power.  Neither Obama nor Romney show any sign of challenging this celebratory global “lock and load” mentality.

To explain why, one must consider not only the pro-military positions of each candidate, but their vulnerabilities — real or perceived — on military issues.  Mitt Romney is the easier to handicap.  As a Mormon missionary in France and later as the beneficiary of a high draft lottery number, Romney avoided military service during the Vietnam War.  Perhaps because he lacks military experience, he has already gone on record (during the Republican presidential debates) as deferring to military commanders on decisions such as whether we should bomb Iran.  A President Romney, it seems, would be more implementer-in-chief than civilian commander-in-chief.

Romney’s métier at Bain Capital was competence in the limited sense of buying low and selling high, along with a certain calculated ruthlessness in  dividing companies and discarding people to manufacture profit.  These skills, such as they are, earn him little respect in military circles.  Compare him to Harry Truman or Teddy Roosevelt, both take-charge leaders with solid military credentials.  Rather than a Trumanesque “the buck stops here,” Romney is more about “make a buck here.”  Rather than Teddy Roosevelt’s bloodied but unbowed “man in the arena,” Romney is more bloodless equity capitalist circling high above the fray in a fancy suit.

Consider as well Romney’s five telegenic sons.  It’s hard to square Mitt’s professions of love for our military with his sons’ lack of interest in military service.  Indeed, when asked about their lack of enthusiasm for joining the armed forces during the surge in Iraq in 2007, Mitt off-handedly replied that his sons were already performing an invaluable national service by helping him get elected.

An old American upper class sense of noblesse oblige,  of sons of privilege like George H.W. Bush or John F. Kennedy volunteering for national service in wartime, has been dead for decades in our otherwise military-happy country.  When it comes to sending American sons (and increasingly daughters) into harm’s way, for President Romney it’ll be another case of chickenhawk guts and working-class blood.

For election 2012, however, the main point is that the Romney family’s collective lack of service makes him vulnerable on national defense, a weakness that has already led Mitt and his campaign to overcompensate with ever more pro-military policy pronouncements supplemented with the usual bellicose rhetoric of all Republicans (Ron Paul excepted).  As a result, President-elect Romney will ultimately find himself confined, cowed, and controlled by the national security complex — and he’ll have only himself (and Barack Obama) to blame.

Obama, by way of contrast, has already shown a passion for military force that in saner times would make him invulnerable to charges of being “weak” on defense.  Fond of dressing up in military flight jackets and praising the troops to the rafters, Obama has substance to go with his style.  He’s made some tough calls like sending SEAL Team 6 into Pakistan to kill Osama Bin Laden; using NATO airpower to take down Qaddafi in Libya [not something to celebrate—Eds]; expanding special ops and drone warfare in Afghanistan, Yemen, and elsewhere, including the assassination of U.S. citizens without judicial process.  America’s Nobel Peace Prize winner of 2009 has become a devotee of special forces, kill teams, and high-tech drones that challenge the very reality of national sovereignty.  Surely such a man can’t be accused of being weak on defense.

The political reality, of course, is different.  Despite his record, the Republican Party is forever at pains to portray Obama as suspect (that middle name Hussein!), divided in his loyalties (that Kenyan connection!), and not slavish enough in his devotion to “underdog” Israel.  (Could he be a crypto-Muslim?)

The president and his campaign staff are no fools.  Since any sign of “weakness” vis-à-vis Iran and similar enemies du jour or any expression of less than boundless admiration for our military will be exploited ruthlessly by Romney et al., Obama will continue to tack rightwards on military issues and national defense.  As a result, once elected he, too, will be a prisoner of the Complex.  In this process, the only surefire winner and all-time champ: once again, the national security state.

So what can we expect on the campaign trail this summer and fall?  Certainly not prospective civilian commanders-in-chief confident in the vitally important role of restraining or even reversing the worst excesses of an imperial state.  Rather, we’ll witness two men vying to be cheerleader-in-chief for continued U.S. imperial dominance achieved at nearly any price.

Election 2012 will be all about preserving the imperial status quo, only more so.  Come January 2013, regardless of which man takes the oath of office, we’ll remain a country with a manic enthusiasm for the military.  Rather than a president who urges us to abhor endless war, we’ll be led by a man intent on keeping us oblivious to the way we’re squandering our nation’s future in fruitless conflicts that ultimately compromise our core constitutional principles.

For all the suspense the media will gin up in the coming months, the ballots are already in and the real winner of election 2012 will be the national security state.  Unless you’re a denizen of that special interest state, we know the loser, too. It’s you.

William J. Astore, a retired lieutenant colonel (USAF), is a TomDispatch regular.  He welcomes reader comments at wjastore@gmail.com. To listen to Timothy MacBain’s latest Tomcast audio interview in which Astore discusses how the two presidential candidates are sure to out-militarize each other in the coming election campaign, click here or download it to your iPod here.

To stay on top of important articles like these, sign up to receive the latest updates from TomDispatch.com here.
Copyright 2012 William J. Astore

The Message of the Charles Taylor Conviction: Don’t Cross Us