Home ACTIVISTS & HEROES Once again, all eyes on Greece

Once again, all eyes on Greece

THE GREEK AFFAIR: SYMBOL OF THE CRISIS OF THE EUROPEAN UNION

OR PARADIGM OF EUROPE’S SALVATION

It is an ironic twist of history that Greece, the cradle of Western culture, today, 2500 years after the acme of Hellenic glory, appears on the stage of history in the best of cases as victim, and in the worst, as the symbol of the threat to the collapse of the West European society—but as a tough remedy for an insidious disease.

(Gaither Stewart in Rome) SYRIZA, an acronym signifying “Coalition of the Radical Left”, is favored to win upcoming re-elections following the inconclusive elections held last May 6. Today’s ungovernable and crisis-ridden Greece is shaking the foundation of the European Union. The left coalition is headed by the 38-year old Alexis Tsipras, prominent since his candidacy for Mayor of Athens in 2006. Tsipras, the leader of the left’s key component called SYNASPISMOS, also an umbrella group of Greece’s far left, originated from the youth wing of the Greek Communist Party, the KKE.

During the ongoing political-economic crisis, Tsipras has enunciated clearly his program: Greece should remain in the Euro Zone but under certain conditions: the unbearable austerity measures imposed on Greece by the Troika of EU, European Central Bank and the World Monetary Fund in the infamous 43-pageMemorandum of Understanding must be renegotiated and modified. He does not favor a leap into the dark of exit from Europe and the Euro; he in fact agrees with German Chancellor Angela Merkel that if Greece abandons the Euro, the next day the market will begin its search for the second victim. And the second will be Spain or Italy. “We do not want to destroy the European Union. But if we are to save Europe, then we must change directions.”

SYRIZA’s prominent parliamentary deputy and party Speaker in the nation’s last Parliament, Theodoris Dritsas, explained in an interview with the Italian radical left newspaper, Il Manifesto, that for its survival Greece must abandon the imposed austerity measures. Dritsas is convinced that recent left electoral victories in France, Germany and Italy mark the beginning of the end of unrestrained economic liberalism in Europe.

SYRIZA is favored to win the June 17 elections. Its electoral strength today is estimated at 22-26%. However, electoral predictions are impossible in a nation where everything changes from one day to the next. In any case, the Greek elections are assuming the character of a frontal clash between the left and the ultra-liberalism that imposed the austerity measures, both conservatives and Socialists.

There are three fundamental questions: Can SYRIZA in this brief time transform itself into a viable, effective political party capable of unifying the entire left and the will of the people? How much of the vote will SYRIZA garner next month? And if it wins the elections, which political alliances will it form in order govern the nation? In any case, it seems certain that the elections will produce a powerful left bloc more unified than it has ever been. Progressives and many Greeks believe that a government with a left core will have the greatest possibility of saving Greek society. 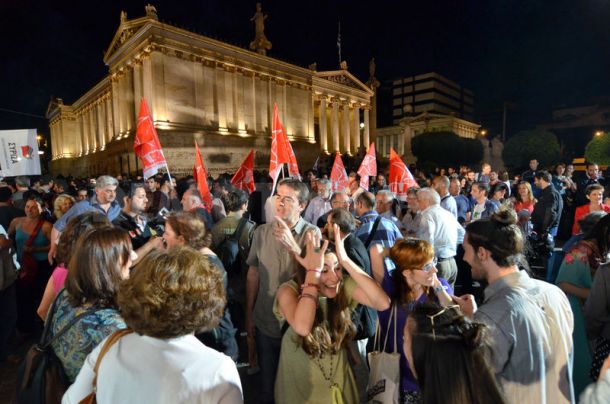 Like most Western Communist parties after the 1970s, Greek Communists of the KKE split into two camps: a national Communist Party in line with the Eurocommunism in Italy, France and Spain, and a pro-Moscow wing. SYNASPISMOS was an electoral alliance between the two which lasted until the 1990s when the main Moscow-oriented KKE abandoned the alliance, in the process purging half its members, who remained in SYNASPISMOS together with the Eurocommunists. Tsispras was among the latter. Thus SYNASPISMOS included diverse left factions and movements: from anti-globalists to Eurocommunists, left Social Democrats, far leftists and ecologists. In the 2004 elections, the party allied with other small parties to form SYRIZA. Under Tsipras leadership the new umbrella group got a 5.6% and 14 parliamentary deputies in 2007.

Today, Greek fear of a return of the far-right, together with the incapability of the traditional PASOK and NEW DEMOCRACY to govern, the economic crisis that has the country on its knees, and Tsipras’ wide popularity and pragmatism, may combine to thrust him, as a British journalist noted, into a role like that of Morales in Bolivia.

The fact remains that the prospects of a far-left, anti-NATO party at the helm of a EU member frightens the European center-right in general and its non-elected governing bodies in Brussels (and Berlin) in particular. Conservative NEW DEMOCRACY continues to try to convince voters that SYRIZA aims at leading Greece out of the Euro and the European Union. SYRIZA instead speaks of a limited program, the core of which would be a debtor-led partial default—suspension of interest payments on remaining debts and repudiation of the terms of the Troika-engineered bailouts. On the other hand, SYRIZA claims it is committed to the EU social model. Its current position would make attempts to force Greece out of the Euro seem to the Greeks an EU-German initiative.

A SYRIZA parliamentary deputy said that since austerity programs don’t work, SYRIZA’s job is to convince Europe to explore new directions without, however, rejecting the Euro. SYRIZA rejects the monetary policies of the Euro Zone and wants to reform the ECB. It believes that today is the opportune moment because the majority of Europeans throughout the union now favor more growth and less austerity. The Socialist victory of Hollande in France may change things in Greece, that is, if a left government comes to power in Athens with the will to make radical changes.

The electoral outcome looks like this: if SYRIZA scores 26% in the June 17 elections it would get just over a hundred parliamentary seats, the same as New Democracy got in May. If the Democratic Left gets the same 20 seats as in May and the Communists their 26 seats, that is near the 150 required for a parliamentary majority.

SYRIZA aims at transforming itself into a single party, making it the biggest Greek party, and thus gaining the “premium” 50 parliamentary seats. It would try to then form a majority with other left forces to carry Greece out of the political deadlock that produced the recession. Tsipras plans to extend party membership to a far left group, to a branch of the crisis-ridden and decimated PASOK and the ECO-Greens, which would broaden its reach further, both to its left and its right. Even without a majority, a SYRIZA-DL minority could attempt a legislative program that relied on the abstention of some parties and “non-opposition” from both the KKE, and the right wing anti-austerity party Independent Greeks (conservative nationalist).

Thus, a combination of historical political factors, the extremist position of the EU and a demographic radicalization of young people, has propelled one of the most left parties in any European parliament to within a few steps of forming a government; and provoking a showdown with the EU that could see Greece’s suspension or exit from the Euro.

At the same time, the resulting radical left government may, in effect, turn out to be little more than a left-social democratic government, despite its complex composition and the radicalism of some of its voters. By forcing the mainstream parties into positions where they could not express the will of the majority of centrist voters, the EU may end up destroying the Greek party system as it has been shaped since 1974.

The question for Greece remains: Left or Right? SYRIZA or NEW DEMOCRACY? A new politico-economic policy or more of the what led the nation where it is today?

Nowhere in Europe has corruption, political and social, been more rampant than in Greece. Nowhere have human dignity, social solidarity and democratic legitimacy been more painfully felt than in Greece. In order to be able to continue extracting full repayment from the Greek people, the EU and IMF even suspended the country’s democracy by imposing a technocratic government under the leadership of a former Vice-President of the European Central Bank. A remarkable detail is that Prime Minister Papademos was in charge of the Greek Central Bank when the country conspired with Goldman Sachs to mask its massive public debt through a quasi-legal financial transaction.

THE EUROPEAN LEFT REBORN ON THE ASHES OF ATHENS

I have extracted the following words from an interview with Theodoris Dritsas conducted by Argiris Panagopoulos for the Rome radical left daily, Il Manifesto:

Theodoris Dritsas is one of the best known activists in Greece. He began fighting for educational rights before the military dictatorship of 1967-74. He spent five years in Pireus as a city councillor in that conflictual port city. He has always favored base and mass movements and is a ferocious defender of their autonomy against encroachments by the political parties that he however considers indispensable. So it was not by chance that he became the paraliamentary Speaker for SYRIZA.

Dritsas: “In the May 6 elections, the Greek people delegitimized the entire traditional political system. After the Communist KKE rejected SYRIZA’s proposal to form a left government together, we have rejected all other proposals which were only attempts to let in through the window that which the people had booted out the door. We believe that a new path has been opened not only for Greece but also for Europe. We are optimistic that in the next elections on June 17 this future will become more stable and the door that has opened will become a still wider space in order to change the country. We don’t know yet who will be our coalition partners. But it’s certain that the next elections are assuming the character of a head-on clash between left and the economic neo-liberals who imposed the austerity cuts on Greece, both conservatives and Socialists. Left forces are best expressed in SYRIZA and the conservatives are represented chiefly in New democracy. I believe the electoral results will show that the left forces are stronger. In their electoral propaganda the parties of New Democracy and PASOK claim we want to bring back the Drachma. For nearly three years we have repeated that the austerity and the application of the Memorandum of Understanding that have destroyed our economy and our society also accentuate the crisis of the Euro Zone. It is more and more evident that Greece is not an isolated case but is part of the crisis of the entire Euro Zone and the European Union. Austerity policies accelerate the destruction of the Greek economy and the crisis of Europe.”

Why the Catholic Church expelled me...