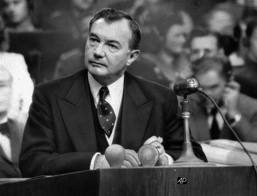 Justice Robert H. Jackson, at Nuremberg. What would he have thought of Bush's crimes? And can you judge a whole system?

…the ultimate step in avoiding periodic wars, which are inevitable in a system of international lawlessness, is to make statesmen responsible to law. And let me make clear that while this law is first applied against German aggressors, the law includes, and if it is to serve a useful purpose it must condemn aggression by any other nations, including those which sit here now in judgment. We are able to do away with domestic tyranny and violence and aggression by those in power against the rights of their own people only when we make all men answerable to the law. This trial represents mankind’s desperate effort to apply the discipline of the law to statesmen who have used their powers of state to attack the foundations of the world’s peace and to commit aggressions against the rights of their neighbors.

Justice Robert H. Jackson, Chief of Counsel of the United States, Opening Statement, Nuremberg International Military Tribunal, November 21,1945 Beginning on Monday, May 7, 2012, the Kuala Lumpur War Crimes Tribunal held an historic proceeding against George W. Bush, Dick Cheney, Donald Rumsfeld and five of their legal advisers: Alberto Gonzales, David Addington, William Haynes, Jay Bybee and John Yoo, to try them on charges of torture and other war crimes. After four full days of legal argument and presentation of evidence, including the live testimony of three witnesses, the tribunal found all eight defendants guilty in a 21-page opinion they issued on the afternoon of Friday, May 12, 2012, local time.

One of the members of the prosecution team was Professor Francis A. Boyle, human rights activist and professor of international law at the University of Illinois Urbana-Champaign. On Monday, May 14, 2012, Boyle and I discussed the significance of the tribunal and this particular case.

He told me that the tribunal had been in existence for about 5 years and was the brainchild of former Malaysian Prime Minister Dr. Mahathir Mohamad. By invitation of Mahathir, Boyle helped set up the Kuala Lumpur War Crimes Commission.

“It’s organized under Malaysian law,” Boyle said. [Mahathir] “called me and some others out to work with him on this project. And one of the things I had suggested to him was that since war was already illegal under the terms of the Kellogg-Briand peace pact of 1928, and the United Nations Charter, the next step was to criminalize war, not just make it illegal but criminalize it.”

Counsel was appointed to represent the defendants, none of whom showed up. Boyle said that it does not offend principles of due process to try people in absentia in countries like Malaysia that pattern their jurisprudence according to the norms of continental Europe.

Defense counsel challenged the jurisdiction of the tribunal. What business was it of Malaysians to try Americans for crimes alleged to have occurred during a war in Iraq?

“This was extensively argued,” Boyle said. “And my response, the prosecution team’s response, was that there was universality of jurisdiction for any state government or court to try international crimes such as crimes against peace, war crimes, and torture.” In its judgment, the tribunal agreed with this argument.

The biggest challenge for the defense was to overcome the amount of evidence against their clients that came from the clients themselves. Boyle said, “Obviously it was a difficult case for them to defend because Bush, Cheney and Rumsfeld all made public statements repeatedly incriminating themselves in war crimes and torture….if you have clients who are so arrogant with power that they incriminate themselves publicly–and we introduced numerous statements by Bush, Cheney, Rumsfeld, that this is what they had done—from the public record, from their memoirs, from interviews and whatever, it becomes very difficult to defend.”

In addition, there were three live witnesses, who had themselves been victims of torture in Guantanamo and in Iraq, such as beatings, electric shocks to the genitals, extraction of fingernails, and sexual humiliation. The female witness testified to being used as a human shield by US soldiers.

Defense attorneys relied heavily on a defense called “Advice of Counsel” which basically meant that Bush, Cheney and Rumsfeld’s attorneys were being thrown under the bus to get the Big Three off the hook. The lawyers had written memoranda telling their bosses that, as Boyle put it, “the steps they were engaged in did not amount to torture.”

At the tribunal, Boyle successfully counterargued that “In fact, these memoranda were completely bogus. They were concocted by these lawyers for the express purpose of trying to set up a defense known as ‘advice of counsel’ and therefore, the lawyers themselves became aiders and abettors and co-conspirators and part of a joint criminal enterprise with the three principals.”

After four full days of proceedings, the five judge spent 22 hours writing the judgment that took an hour and a half to read in court the next day. The tribunal has no enforcement power but will recommend to the Kuala Lumpur War Crimes Commission that it submit the finding of conviction, together with a record of the proceedings, to the Chief Prosecutor of the International Criminal Court, as well as the United Nations and the Security Council.

The tribunal also recommended that the names of all 8 convicted persons be entered and included in the Commission’s Register of War Criminals, and that the widest international publicity be given to the convictions and to the tribunal’s grant of reparations (no amount specified) to the three witnesses. Although the tribunal has no powers to enforce the grant of reparations, the judgment stated that “It is the Tribunal’s hope that armed with the Findings of this Tribunal, the witnesses (victims in this case) will, in the near future, find a state or an international judicial entity able and willing to exercise jurisdiction and to enforce the verdict of this Tribunal against the 8 convicted persons and their government.”

Are the findings of this tribunal of conscience merely symbolic? Boyle doesn’t think so. “We’ll try to get it enforced in any other court we can, on principles of international comity that permit the courts of one state to enforce the judgments of other states.”

Boyle views the Kuala Lumpur judgment as “prima facie evidence that [the defendants] have committed torture and war crimes.” He hopes that the judgment will inspire Americans to demand the prosecution, in America, of “these American war criminals.”

On May 17, 2012, the website AllAfrica.com published a story by Paul Yeenie Harry reporting that Former Liberian President Charles Taylor, himself now convicted of war crimes and crimes against humanity by the Special Court for Sierra Leone, has called for the prosecution of George W. Bush for similar crimes. In a statement he read before the court, Taylor said “President George W. Bush not too long ago ordered torture and admitted to doing so. Torture is a crime against humanity. The United States has refused to prosecute him. Is he above the law? Where is the fairness?”

The tribunal invited and received broad-based international media coverage except by the mainstream media of the United States.

Kéllia Ramares-Watson is an independent journalist in Oakland, California. You can hear her full interview of Prof. Francis A. Boyle at radio4all.net. You may contact her about this story at broadcaster [at] inbox [dot] com.

ARCHIVES: Roger Waters’ The Wall Live tour: A comment from a reader