The Ghost of George Orwell at 1600 Pennsylvania Ave 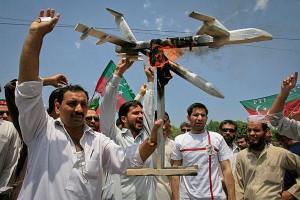 Pakistanis hold up a burning mock drone aircraft during a May rally against drone attacks in Peshawar. In 2009, the Brookings Institution estimated that unmanned drone attacks were killing about 10 civilians for every 1 insurgent in Pakistan. K. Pervez/Reuters

Gary Brumback, PhD, is a retired psychologist and Fellow of both the American Psychological Association and the Association for Psychological Science. He is the author of The Devil’s Marriage: Break Up the Corpocracy or Leave Democracy in the Lurch. Gary can be reached at: democracypower@bellsouth.net.