OpEds: Turning Our Backs on Unions 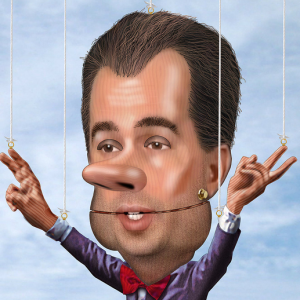 Editor’s Note: The Wisconsin defeat of Scott Walker’s recall drive yesterday reminds us, once again, of the immense power of money in American elections, a poisonous antidemocratic role that is fed by the old four-headed hydra:

The above should NOT be read as an endorsement of Tom Barret, who, while a Democrat, is a corrupt machine politician who even in the heat of the campaign was sending code signals to its patrons that a program of  “responsible austerity” was the only way out of the crisis. Coming from a Democrat, the pseudo opposition to Republicans and business priorities in general, such pronouncements should not surprise us.—P. Greanville

It stands out in part because Noah, a columnist for The New Republic, is not content to simply shake his fists at the heavens in anger. He spends exactly one chapter on what he calls the “rise of the stinking rich” — that is, the explosion in executive pay and what he calls “the financialization of the economy,” which has enriched one small segment of society at the expense of everyone else.

Mostly, he grapples with the deep, hard-to-tickle-out reasons that the gap between the rich and the middle class in the United States has widened to such alarming proportions. How much have technological advances contributed to income inequality? Globalization and off-shoring? The necessity of having a college education to land a decent-paying job? The decline of labor unions?

That last one, I have to admit, caught me up short. My parents were both public high school teachers, who proudly walked picket lines when the need arose. My hometown, Providence, R.I., was about as pro-union a city as you could find outside the Rust Belt. But like many college-educated children of union parents, I have never been a member of a union, and I viewed them with mild disdain.

As Andy Stern, the former president of the Service Employees International Union, put it to me: “White-collar professionals tend to appreciate what unions did for their parents. But they don’t view today’s janitors or nurse’s aides in the same way.” Instead, they — or, rather, we — tend to focus on the many things that are wrong with unions, exemplified these days by the pensions of public service employees that are breaking the backs of so many cities and states. Unions seem like a spent force, and we tend not to lament their demise.

Noah includes himself as one of those liberals “who spent too much time beating up unions,” as he told me recently. (He and I are both members of the informal Washington Monthly alumni society.) His thinking began to change in the early 1990s when he read “Which Side Are You On?” It is a powerful meditation on the difficulties unions face, written by Thomas Geoghegan, a Chicago labor lawyer. Researching “The Great Divergence” reinforced Noah’s growing view that when liberals turned their backs on unions — when they put, in his words, “identity politics over economic justice” — they made a terrible mistake.

Noah places the high-water mark for unionism in the mid-1950s, when nearly 40 percent of American workers were either union members or “nonunion members who were nonetheless covered by union contracts.” In the early postwar years, even the Chamber of Commerce believed that “collective bargaining is a part of the democratic process,” as its then-president noted in a statement.

But, in the late-1970s, union membership began falling off a cliff, brought on by a variety of factors, including jobs moving offshore and big labor’s unsavory reputation. Government didn’t help either: Ronald Reagan’s firing of the air traffic controllers in 1981 sent an unmistakable signal that companies could run roughshod over federal laws intended to protect unions — which they’ve done ever since.

This makes perfect sense, of course. Company managements don’t pay workers any more than they have to — look, for instance, at Walmart, one of the most virulently antiunion companies in the country. In their heyday, unions represented a countervailing force that could extract money for its workers that helped keep them in the middle class. Noah notes that a JPMorgan economist calculated that the majority of increased corporate profits between 2000 and 2007 were the result of “reductions in wages and benefits.” That makes sense, too. At the same time labor has been in decline, the power of shareholders has been on the rise.

“Say what you want about the abuses that labor committed,” says Noah. “They were adversarial. They weren’t concerned enough about the general prosperity. Some of them were mobbed up. But they were necessary institutions.”

Not surprisingly, Noah closes his book with a call for a revival of the labor movement. It is hard to see that happening any time soon. And unions need to change if they are to become viable again. But if liberals really want to reverse income inequality, they should think seriously about rejoining labor’s side.

Celebrities Are Such Scumbags Because They’re...