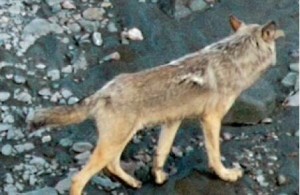 Editor’s Note: Once again humans demonstrate their capacity for depravity and cruelty, and public officials their disgusting venality in regard to the privileged  “interests” of hunters, a class of people practically worshiped in nature-exploiting states like Alaska, put above the rights of other citizens who are entitled to enjoy nature with a camera and not a gun (or arrows or worse) and where any animal unfortunate enough to compete for “game” with gun-toting bloodthirsty idiots and their state official supporters is a target for organized massacre. When will humanity emerge from this nonsense? A nonsense abetted by the powerful and vociferous gun lobby every inch of the way? A lobby which despite the noise remains an absolute but well organized minority? When will national politicians rustle up the courage to stand up for what is obviously right, to halt a totally unjustified war on nature? If the actions of Coke Wallace shock you, remind yourself that hunting guides, as people who make a living serving hunters, are well-known for their indifference to ethics when it comes to animals. Their kind has been idiotically idealized in many movies, where the image of the great white hunter and his loyal guide is still admired. Meanwhile, expect the carnage of wildlife to continue unabated in Alaska and similar —P. Greanville

From ANIMAL PEOPLE,  June 2012
A dispatch by Merritt Clifton

DENALI NATIONAL PARK,  Alaska–Hunting guide Coke Wallace, of Healy,  has acknowledged walking an aged horse to the Stampede Trail near the northern boundary of Denali National Park,  shooting the horse,  and setting snares around the carcass.  The snares killed the last known breeding female wolf from the Grant Creek pack–the pack that roams the area made famous by the 1996 book by Jon Krakauer and 2007 feature film Into the Wild,  about the 1992 death nearby of 22-year-old would-be survivalist Christopher McCandless.
The Grant Creek pack,  also called the Toklat West pack,  is among the three wolf packs most often viewed and photographed by Denali visitors.  The pack has been continuously studied since 1939, first by Adolf Murie until his death in 1974,  then by Gordon Haber from 1966 until his death while spotting wolves from a light plane in 2009,  and currently by Anchorage conservation biologist and former University of Alaska professor Rick Steiner.
“One of the dead wolves was equipped with a radio collar attached by scientists.  She was the only female from the pack known to have raised pups last year,”  reported Kim Murphy of the Los Angeles Times.  “The pack’s only other known breeding female was found dead near the pack’s den,  probably of natural causes.  A third wolf,  also snared near the horse carcass,  was a male who may or may not have been part of the Grant Creek pack,”  according to Denali National Park biologist Tom Meier.
Wallace contended that the female wolf he snared was emaciated.  “Coke’s wolf was in a trap for a week and was scavenged by a wolverine before he ever even saw it,”  Meier responded to Murphy.  “These wolves aren’t starving.”  Meier pointed out that wolves are normally lean in spring,  after enduring the harsh Alaskan winters.
The Denali National Park wolf population has declined since 2006 from 103 wolves in 15 packs to 70 wolves in nine packs,  a 20-year low,  Meier said.
“The snares were within the former protected Denali buffer, where trapping and hunting of wolves was prohibited from 2002 to 2010,”  e-mailed Steiner.  “Ignoring several proposals to expand the no-take Denali wolf buffer zone–including a proposal from Denali National Park itself–the Alaska Board of Game instead eliminated the protective buffer and imposed a moratorium on future consideration of any Denali wolf protection buffer proposals until 2016.”
The Alaska State Troopers and Alaska Department of Fish & Game said Wallace had not broken any laws,  but downstream residents David and Susan Braun told the Alaska Department of Environmental Conservation that the rotting horse carcass had contaminated their drinking water.
Friends of Animals and Defenders of Wildlife amplified appeals for the Denali buffer zone to be restored.
Amid the controversy,  acting Alaska Division of Wildlife Conservation director Doug Vincent Lang on May 1,  2012 told Dan Joling of Associated Press that the agency would do a year of further study before implementing a recommendation by the Alaska Board of Game that wolves,  black bears,  and grizzly bears should be culled on the Kenai Peninsula to boost the numbers of moose available to human hunters.

MERRITT CLIFTON is editor in chief of Animal People, the only independent publication devoted to ecoanimal issues in the world.