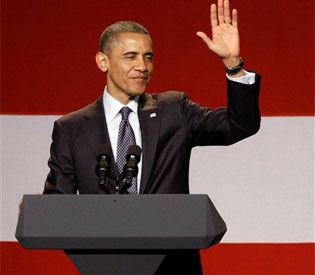 President Barack Obama waves as he arrives at a campaign fundraiser sponsored by the Lesbian, gay, bisexual and transgender community, at the Beverly Wilshire Hotel in Beverly Hills, Calif., Wednesday, June 6, 2012.

President Obama has announced that he supports gay marriage. As he said (1): “At a certain point, I’ve just concluded that for me personally it is important for me to go ahead and affirm that I think same-sex couples should be able to get married. . . . I had hesitated on gay marriage in part because I thought that civil unions would be sufficient. . . . I was sensitive to the fact that for a lot of people, the word marriage was something that invokes very powerful traditions and religious beliefs.”

Wow! How about that (as the famous old-time New York Yankees radio broadcaster Mel Allen used to say)? The President has shared with us his personal view on the subject, which he presumably “evolved” to. Well that’s nice to know, but as our highest elected official he takes no position on the law. In fact he has made it clear that as far as the law is concerned, the matter should be left to the states. And indeed about 40 of them have out-lawed the institution, at one level of another. So, how is the President, as the President, not just as some observer whose views have “evolved,” wrong on the issue? Let us count the ways.

1. In all 50 states marriage (and its dis-solution) is the subject of civil law. To deny same-sex couples access to that part of the civil law clearly violates Section 1 of the 14th Amendment, which among other things provides that the states may not “deny to any person within its jurisdiction the equal protection of the laws.” And this from a former professor of Constitutional law. When I was young and Richard Nixon (before EPA and etc.) was an unalloyed enemy, we would say of him and his heavy beard “would you buy a used-car from this man?” Well, at a much more important level, would you take a course in Constitutional law from this President, who a) makes a pronouncement on same-sex marriage without referring to the Constitution and then b) says that the states are free to discriminate against a particular sub-group of the population based on their sexual orientation?

2. He has acknowledged at the same time he is telling us of his personal view that he is sensitive to the views religiously-based opponents of the institution. Golly gee, Mr. President. You know that there are some folks who find white supremacy on the Bible, and the justification for slavery can be found in it too. The objections to allowing access to that part of the civil law by same-sex couples are always based on religious dicta, most often in this country drawn from Biblical texts (Old and New Testaments and now, the Book of Mormon). To do so clearly violates the first provision of the First Amendment to the Constitution: ” Congress shall make no law respecting an establishment of religion, or pro­hibiting the free exercise thereof.”

The 14thAmendment, cited above, also applies the provisions of the Bill of Rights to the States. Since the banning of same-sex marriage is always “justified” on religious grounds, it clearly “establishes religion” in the law and thus violates the Constitution. At the same time, under the “free exercise” provision, if a church doesn’t want to perform same-sex marriages it doesn’t have to. But under the Constitution that does not give organized religion the power to ban same-sex marriage in the civil law, for everyone.

3. “Anti-gay marriage” laws and initiatives are nothing more or less than dog whistles, more polite indicators, for homophobia. Can’t be openly against the gays, now can we? But let’s deny them their civil rights, because they are gay and we don’t like them. It is well past time that there has to be an attack on this issue. Homophobia is a deep-seated expression of hated for folks who are “different,” who are “not like us.” It is then easy to label gays as second class citizens, and then to make them into second-class citizens by denying them equal rights under the law.

Many people do not know that the first identity group the German Nazis went after, before they went after the Jews, was the gays. The mandatory wearing of the Pink Triangle by homosexuals in Nazi Germany came before the mandatory wearing of the yellow Star of David by Jews. It is fascinating that despite the discrimination, in Nazi Germany there were (presumably closeted) gay members of the Nazi Party. In fact, Ernst Roehm, the commander of the private Right-Wing militia, the “Sturmabteilung,” the SA, the Brown Shirts, which did so much to push Hitler to power, was gay. How do we know this? Well, on what was called “The Night of the Long Knives,” September 30, 1934, when he was assassinated, not because he was gay but because the Prussian Army wanted him and the SA out of the way as part of their price for supporting Hitler, he was murdered in bed alongside a blond 19 year old male.

4. Finally, politically the most important point to make here is the use to which the Republican Party puts this issue. Its candidates run on it. In the 2004 election, Karl Rove arranged to have anti-gay marriage Constitutional amendments put on 11 state ballots, to draw Religious Right voters to the polls so that they could also vote for George Bush. None other than Howard Fineman of the Huffington Post, a liberal/progressive (but surely no radical leftist) has characterized the contemporary GOP as the “American Faith Party” (2). (Interestingly enough, that post has been taken down from the site.)

In fact, all of the leading planks in the Republican Party platform (for years) on the so-called “social issues” (correctly termed “religious issues”) are based in a particular religious doctrine: defining life as beginning at the moment of conception, the practicing of legal discrimination against homosexuals, the banning of the use of stem cells for either research or treatment, for some GOPers, the banning of the use of contraceptives, the prohibition of personal decision-making at the end of life. And Republicans never lose their enthusiasm for telling us that we are a “Christian Nation under God,” despite the fact that neither word appears anywhere in the Constitution.

These are the issues that need to be joined politically before it is too late. But where are the President, and indeed all of the leadership of the Democratic Party? Well, I guess that they are still “evolving.”

Steven Jonas, professor of preventive medicine, is a senior contributing editor with The Greanville Post, and a widely published author and contributor to many of the leading political sites on the web, including Buzzflash, Cyrano’s Journal Today and others. His futuristic novel, The 15% Solution, about how the Republican religious right could win the White House in the near future is scheduled to be published this winter by Punto Press.

The Mexican Student Movement Is Younger & Faster than “Occupy”

A Green-Washed Global Economy – A...