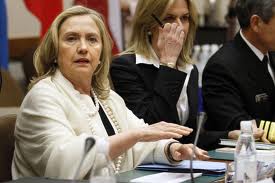 The quintessential mainstream liberal, Clinton has had no problem filling the job of key hypocrite for the Empire.

By Paul Craig Roberts| May 25, 2012
The US government is the second worst human rights abuser on the planet and the sole enabler of the worst–Israel. But this doesn’t hamper Washington from pointing the finger elsewhere.

The US State Department’s “human rights report” focuses its ire on Iran and Syria, two countries whose real sin is their independence from Washington, and on the bogyman- in-the-making–China, the country selected for the role of Washington’s new Cold War enemy.

ALL CAPTIONS BY TGP EDITORS

Hillary Clinton, another in a long line of unqualified Secretaries of State, informed “governments around the world: we are watching, and we are holding you accountable,” only we are not holding ourselves accountable or Washington’s allies like Bahrain, Saudi Arabia, Israel, and the NATO puppets.

Hillary also made it “clear to citizens and activists everywhere: You are not alone. We are standing with you,” only not with protesters at the Chicago NATO summit or with the Occupy Wall Street protesters, or anywhere else in the US where there are protests. (ref)

The State Department stands with the protesters funded by the US in the countries whose governments the US wishes to overthrow. Protesters in the US stand alone as do the occupied Palestinians who apparently have no human rights to their homes, lands, olive groves, or lives.

In the US some protesters are being officially categorized as “domestic extremists” or “domestic terrorists,” a new threat category that Homeland Security announced is now the focus of its attention, displacing Muslim terrorists as the number one threat to the US. In September 2010, federal police raided the homes of peace activists in Chicago and Minneapolis. The FBI is trying to concoct a case against them by claiming that the peace activists donated money to the Popular Front for the Liberation of Palestine. As demanded by Israel, the US government has designated the PFLP as a terrorist group.

In Chicago last week, among the many arrested NATO protesters with whom the State Department does not stand are three young white americans arrested for “domestic terrorism” in what Dave Lindorff reports was “a warrantless house invasion reminiscent of what US military forces are doing on a daily [and nightly] basis in Afghanistan.” If the US government, which stands with protesters everywhere except in America, Bahrain, Saudi Arabia, Yemen and Palestine, can make this into a terrorism case, the three americans can be convicted on the basis of secret evidence or simply be incarcerated for the rest of their lives without a trial.

Meanwhile the three american “domestic terrorists” are being held in solitary confinement. Like many of the NATO protesters, they came from out of town. Brian Church, 20 years old, came from Fort Lauderdale, Florida. Jared Chase, 27, came from Keene, New Hampshire. Brent Betterly, 24, came from Oakland Park, Florida. Charged with providing material support for terrorism, the judge set their bail at $1.5 million each.

These three are not charged with actually throwing a Molotov cocktail at a person or thing. They are charged with coming to Chicago with the idea of doing so. Somehow the 16 federal intelligence agencies plus those of our NATO puppets and Israel were unable to discover the 9/11 plot in the making, but the Chicago police knew in advance why two guys from Florida and one from New Hampshire came to Chicago. The domestic terrorism cases turn out to be police concoctions that are foiled before they happen, so we have many terrorists but no actual terrorist acts.

This is human rights in america. But the State Department’s human rights report never examines the US. It is a political document aimed at Washington’s chosen enemies.

Meanwhile, Human Rights america continues to violate the national sovereignty of Pakistan, Yemen, and Afghanistan by sending in drones, bombs, special forces and in Afghanistan 150,000 US soldiers to murder people, usually women, children and village elders. Weddings, funerals, children’s soccer games, schools and farmers’ houses are also favorite targets for Washington’s attacks. On May 25 the Pakistani Daily Times reported that Pakistani Foreign Office spokesman Moazzam Ali Khan strongly condemned the drone attacks: “We regard them as a violation of our territorial integrity. They are in contravention of international law. They are illegal, counter productive and totally unacceptable.”

The US reportedly funnels money to the Iranian terrorist group, MEK, declared terrorists by no less than the US State Department. But it is OK as long as MEK is terrorizing Iran. Washington stands with MEK’s protests delivered via bombs and the assassin’s bullet. After all, we have to bring freedom and democracy to Iran, and violence is Washington’s preferred way to achieve this goal.

NATO, guided by Washington, went far outside the UN resolution declaring a no-fly zone over Libya. NATO in blatant violation of the UN resolution provided the air attack on the Libyan government that enabled the CIA-supported “rebels” to overthrow Gadhafi, killing many Libyan civilians in the process.

Under the Nuremberg standard (principle VI.a.i), it is a war crime to launch a war of aggression, which is what Washington and its NATO puppets launched against Libya, but, no sweat, Washington brought Libya freedom and democracy.

Assassinating foreign opponents is the West’s preferred diplomacy. The British were at ease with it, and Washington picked up the practice. In his book, The Decline and Fall of the British Empire, Cambridge University historian Piers Brendon, the Keeper of the Churchill Archives, reports from the documents he has at hand, that in the build up to the “Suez Crisis” in 1956, British Prime Minister Anthony Eden told Foreign Office minister Anthony Nutting, “I want him [Nasser, Egypt’s leader] murdered.”

Brendon goes on to report: “Doubtless at the Prime Minister’s behest, the Secret Intelligence Service did hatch plots to assassinate Nasser and to topple his government. Its agents, who proposed to pour nerve gas into Nasser’s office through the ventilation system, were by no means discreet.” The secret agents talked too much, and the scheme never came to fruition.

But don’t expect Washington to take any notice. The war crimes convictions are merely a “political statement.”
_________ 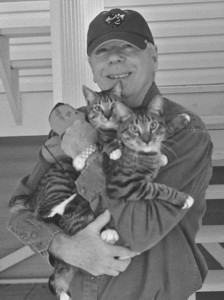 Paul Craig Roberts was Assistant Secretary of the Treasury for Economic Policy and associate editor of the Wall Street Journal. He was columnist for Business Week, Scripps Howard News Service, and Creators Syndicate. He has had many university appointments. His internet columns have attracted a worldwide following.  One of his biggest credentials is that, like so many bright people,  he is a cat lover.

From the Archives: Groupthink and the slide into fascism

The media is constantly flattering and...