Houndsmen are convicted by video in Maine & worried in Indiana

Houndsmen are convicted by video in Maine & worried in Indiana 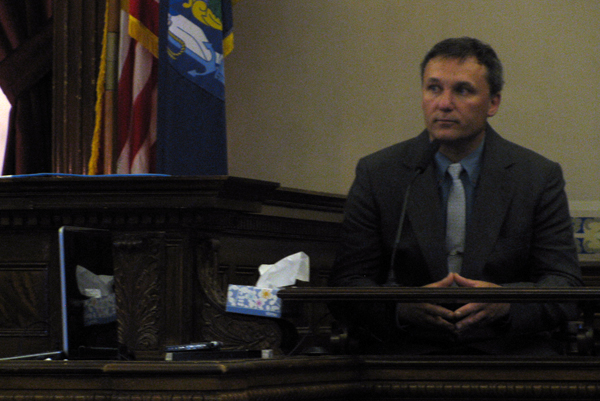 Randall Carl of Knox testifying at his own trial.

BELFAST, Maine; LINTON, Indiana–A Superior Court jury in Waldo County, Maine on April 23, 2012 deliberated for less than an hour before convicting Randall Carl of Knox, 46, of aggravated cruelty for setting four bluetick coonhounds on an illegally trapped and tethered bobcat in February 2009. The bobcat was killed.

A Master Maine Guide, Carl “will lose his job with the state Department of Corrections because he is now a convicted felon, was sentenced to 15 months in prison with all but 10 days suspended, will pay $1,325 in fines and fees, and will spend two years on probation, during which time he will be prohibited from using or possessing hunting dogs or hunting or trapping equipment. He also will be barred from hunting, trapping or guiding activities during this time,” reported Bangor Daily News staff writer Abigail Curtis. Carl was convicted seven months after fellow prison guard Corey Robinson, 30, of Montville, “was found guilty of aggravated cruelty to animals and a closed-season trapping violation by a different Waldo County jury,” Curtis continued. “Robinson received the same sentence but is appealing the verdict.” Both Carl and Robinson were convicted after the juries viewed video of the purported “training accident” taken by Vernon Travis Smith of Burnham, who “pleaded guilty to a closed-season trapping charge and paid a fine,” Curtis wrote.

The verdicts were noteworthy not only for convicting hunters of what they contended was not a deliberate outcome but also for coming in a state which has long had one of the highest rates of hunting participation in the U.S.

Becoming aware of a Showing Animals Respect & Kindness drone helicopter overhead, videotaping the proceedings, houndsmen participating in a “field trial” at the 300-acre Indiana Fox Hunters’ Association facility near Linton, Indiana on June 2, 2012 called off their dogs for hours. Cameras mounted on the drone helicopter clearly showed several coyotes seeking cover ahead of large packs of hounds. Further chases proceeded only at long intervals, SHARK founder Steve Hindi told ANIMAL PEOPLE. Pressured in 2010 by animal advocates to close the Linton facility, which had operated for about 20 years without permits, the Indiana Natural Resources Commission instead voted 9-2 to create a permit to keep the site open.

Don’t Miss a Single Article!
Subscribe to our reports by signing up below.
It’s easy, safe and quick.
JUST CLICK ON THE LINK BELOW

Subscribe to Animal People (The HTML Edition) by Email