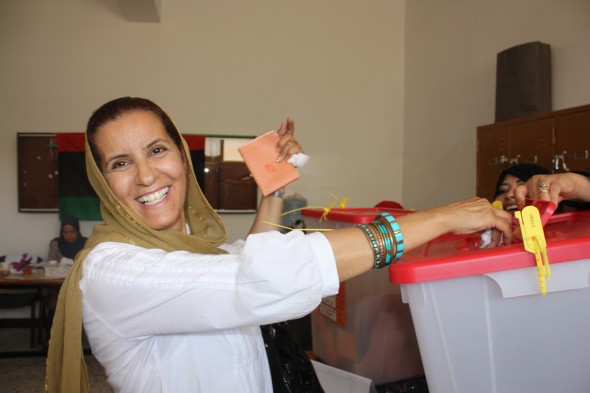 The authors’ main theme was that “elections held under conditions of military occupation and extensive pre-election ‘pacification’ ” aren’t free.  They’re conducted to install client regimes. Those in charge are pro-Western puppets, not legitimate leaders.

Elections are instruments of US dominance. Selling deception is crucial. Media scoundrels regurgitate the Big Lie. Herman says “the media leopard never changes its spots.”  Managed news substitutes for truth and full disclosure. Readers and viewers are deceived and betrayed. It happens repeatedly at home and abroad.

Libya’s July 7 sham elections are the latest example. Democracy was absent from the ballot. The puppet National Transitional Council (NTC) leaders manipulated the process. On Tuesday, votes were still being counted.

It hardly matters who wins. Washington engineered its own victory whether Islamists or secularists take charge separately or in coalition government.  They’ll serve as proxies for power, privilege, and neoliberalism’s death grip. Ordinary Libyans want to live free. Liberation depends on fighting for it.

Protracted struggle continues. Libya remains a cauldron of violence and instability. Washington needs these conditions to justify its presence. US and perhaps other NATO forces guard Libyan oil installations and other strategic sites.

Media scoundrels say nothing. Instead, they hailed Libya’s first democratic election. Fiction substituted for fact. Democracy was nowhere in sight.

Beauty is in the eye of the beholder. Most Libyans have a different view. Media scoundrels excluded them from those quoted.

They downplayed a nation in shambles, millions impoverished on their own, extreme human misery, protracted conflict, and liberation struggles likely continuing for years.

“This is a heartening outcome because the election of a national assembly, judged by independent observers to be reasonably free and fair, was not a given.”

Thus spake the Newspaper of Record. It represents power and privilege. It supports corporate interests. It cheerleads imperial wars. It backs US client regimes. It endorses sham elections pretending to be legitimate ones.

Initial tallies suggest Islamist parties did worse than expected. Jabril says “his multi-party alliance is neither secular nor liberal and includes sharia Islamic law among its core values.”

It hardly matters. At issue only is who pulls the strings and controls things. Libya’s government is headquartered in Washington. Other countries America destroyed are dominated the same way.

“Democratic transitions are invariably long and messy,” said The Times. Ignored was that America spurns democracy at home and abroad. Money power runs things. People have no say.

Nonetheless, The Times called Libya’s election “a huge step away from the Qaddafi nightmare.”

In fact, most Libyans supported Gaddafi. The longer war raged, the more it grew. Near the end of conflict it was overwhelming. It likely still is given what Libyans lost.

Libyans also got free use of land for agriculture. The idea was to foster self-sufficiency in food production. Moreover, all basic food items were subsidized. They were sold through a network of “people’s shops.”

Until NATO arrived, Libyans had Africa’s highest standard of living. Oil revenues provided them. They also stimulated economic development. According to “Qaddafi and the Libyan Revolution,” authors David Blundy and Andrew Lycett said:

“Every Libyan gets free, and often excellent, education, medical and health services.”

“New colleges and hospitals are impressive by any international standard.”

“All Libyans have a house or a flat, a car, and most have televisions” and other conveniences.

“Compared with most citizens of Third World countries, and with many (others), Libyans have it very good indeed.”

“The house is a basic need of both the individual and the family, therefore it should not be owned by others.”

They could vote and participate politically. They could also own and sell property independently of their husbands. Under the 1969 Constitutional Proclamation, Clause 5, they got equal status with men. Education and employment were included even though men played a leading role in society.

“(A)ll individuals have a natural right to self-expression by any means….”

“In a socialist society, no person may own a private means of transportation for the purpose of renting to others, because this represents controlling the needs of others.”

“The democratic system is a cohesive structure whose foundation stones are firmly laid above the other (through People’s Conferences and Committees). There is absolutely no conception of democratic society other than this.”

Green Book ideology rejected Western democracy and exploitive capitalism. It was one among other reasons why Washington wanted Gaddafi ousted.

On January 4, 2011, the Human Rights Council (HRC) prepared its “Report of the Working Group on the Universal Periodic Review: Libya Arab Jamahiriya.”

It said Gaddafi’s government protected “not only political rights, but also economic, educational, social and cultural rights.” It also praised his treatment of religious minorities, and “human rights training” of its security forces.

Washington’s intervention prevented its expected overwhelming approval. Instead it was postponed. Now it’s buried. It’s little more than a little known footnote about Libya under Gaddafi.

According to The Times, Libya’s transition will be “long and messy” because it has “almost no government institutions to build on.”

At the same time, Saturday’s elections represent “a huge step away from the Qaddafi nightmare.”

So much for truth and full disclosure. Times editorials exclude it.

The view from the Washington Post matches its deception and disingenuousness. On July 9, its editorial headlined “Libya’s all-important post-election steps,” saying:

Gaddafi “left (Libya) with no recognizable political institutions, no rule of law and no established political parties.”

After decades under Gaddafi, it said, “Saturday’s general election was a remarkable achievement.”

At most, it was “remarkable” deception. Legitimacy was entirely excluded.

Libya’s new government will succeed, said the Post, if its leaders can “impose(e) its authority across the country, including disarming militias or integrating them with official security forces….”

“NATO’s intervention….paved the way for Saturday’s landmark election. Now the Obama administration and its allies should help the new authorities attain their goal of a democratic Libya.”

In fact, Libya is colonized and occupied. Carving up its corpse for profit began last year. Ordinary Libyans are entirely excluded.

For Libyans, their protracted struggle to live free continues. It won’t end until America’s imperial scourge is vanquished.

Stephen Lendman lives in Chicago and can be reached at lendmanstephen@sbcglobal.net.   His new book is titled “How Wall Street Fleeces America: Privatized Banking, Government Collusion and Class War”