Home ANNOTATED NEWS The Next Stage in the Destruction of Syria

The Next Stage in the Destruction of Syria

The Western media lies continue and a whole nation is again immersed in chaos and bloodshed. Haven’t we seen this before? 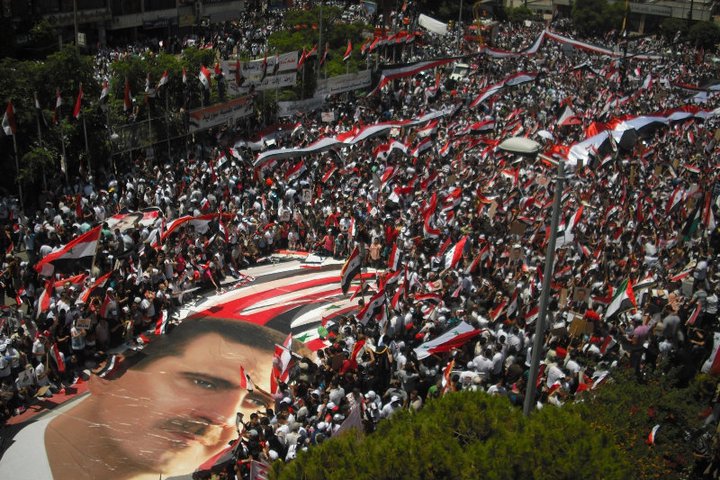 Despite the inevitable confusion and violence injected by a state of growing civil war, a solid majority of Syrians support the Assad regime, especially now that they see what is in store in the event of an American style “regime change”.

The U.S. media has made its intentions clear: the ‘rebels’ attacking Syria’s government must have more support to advance Syria’s “revolution.”  This was the result of the much-hyped advance of Syria’s rebels into the country’s two largest cities, which the western media portrayed as a defining moment in global democracy. But “journalists” like these have blood on their hands, with much more in the works.

The systematic dismantling of Syria has more to do with western media lies and geo-politics than “revolution;” and the more that the U.S. media cheers on this bloodletting, the more politicians feel enabled to spill it.

The rebel attacks on the cities of Damascus and Aleppo were, in actuality, meant to convince the western media that the rebels are near victory, with the hopes of attracting more direct military support from abroad. In reality, however, the attacks in Damascus were instantly crushed by the Syrian government, but the U.S. media predicted “victory just around the corner” for the rebels.

Suddenly Syria is becoming a U.S. presidential topic of debate.  Republicans have accused Obama of “outsourcing” the Syrian conflict, refusing to be involved when the rebels deserve extra support (guns mainly). But Obama is the principal cause of this humanitarian catastrophe. Middle East expert Robert Fisk explains:

“While Qatar and Saudi Arabia arm and fund the rebels of Syria…Washington mutters not a word of criticism against them. President Barack Obama and his Secretary of State, Hillary Clinton, say they want a democracy in Syria. But Qatar is an autocracy and Saudi Arabia is among the most pernicious of caliphate-kingly-dictatorships in the Arab world.”

Fisk fails to mention that Qatar and Saudi Arabia are virtual puppets of U.S. foreign policy; they would never act independently to overthrow a regional neighbor; they do so on command.

Syria is conveniently surrounded by close allies of the U.S., and it is through these allies that guns and foreign fighters have poured into Syria to cause massive destruction. The rebel-held areas of Syria exist only on the rural borders of Turkey, Jordan, and Northern Lebanon, areas in alignment with U.S. foreign policy.

Revolutions are city affairs, but the Syrian revolution has been a rural undertaking ever since foreign powers decided to destroy the country. It is fortunate for the rebels that Syria’s two largest cities are close to these border countries: the rebels made a quick foray into the cities for some high profile attacks, and then drifted back to the border areas to seek protection from their friends.

Although it is true that the so-called Free Syrian Army includes defectors from the Syrian military, it is possible that these defectors are simply betting that, in the long term, the U.S. will spare no expense in overthrowing the Syrian government.

The commonsense question that the U.S. media never explores is whether Syrians want their country destroyed, the inevitable result of this conflict. In fact, there are numerous indications to the contrary. After constant cheerleading of the Syrian rebels, The New York Times has been forced to admit on several occasions that massive pro-government rallies have been held in Syria’s only two large cities:

“The turnout [at least tens of thousands] in Sabaa Bahrat Square in Damascus, the [Syrian] capital, once again underlined the degree of backing that Mr. Assad and his leadership still enjoy among many Syrians… That support is especially pronounced in cities like Damascus and Aleppo, the country’s two largest.”

This was further confirmed by a poll funded by the anti-Syrian Qatar Foundation, performed by the Doha Debates:

“According to the latest opinion poll commissioned by The Doha Debates, Syrians are more supportive of their president with 55% not wanting him to resign.” (January 2, 2012).

This should be of zero surprise. Syrians have seen Iraq, Afghanistan, and Libya destroyed by U.S.-style “liberation.” Americans should know better too — and many do — regardless of their media’s blatantly criminal behavior.

The United States is using a strategy in Syria that has been perfected over the years, starting with Afghanistan (in the 1980’s) Yugoslavia, and most recently in Libya: arming small paramilitary groups loyal to U.S. interests that attack the targeted government — including terrorist bombings — and when the attacked government defends itself, the U.S. cries “genocide” or “mass murder,” while calling for foreign military intervention.

In each instance the targeted society is dismembered, mass murder and ethnic/religious violence is consciously used to gain military advantage that inevitably spirals out of control; refugee crises are also natural consequences, which inevitably lead to cross border destabilization and wider regional conflicts. Millions of lives are completely ruined in each instance, if not ended.

There is every indication that the Syrian conflict has the potential — as the Iraq war before it — to cause incredible ethnic and religious violence on a multi-nation scale. Neighboring Lebanon has already experienced armed conflict as a direct result of Syria and is a powder keg of ethnic and religious tension that needs only a spark to explode, and Syria promises to spew flames.

The U.S. population has largely been spared images of the incredible suffering and social destruction caused by the Iraq and Afghanistan wars.  Syria’s crisis is thus happening in an already-destabilized region, having the potential to completely tear the social fabric of the larger Middle East.

These war crimes benefit nobody except the very rich who take over the helm of governments and use these positions to privatize the invaded country’s economy, though especially the oil. The people in Syria, however, are being used as cannon fodder for an additional reason: so that the U.S. can have a steppingstone towards destroying Iran (Syria is Iran’s close ally). But Russia and China are acting more boldly against this genocidal behavior, and may act with more vigor in defending their allies, a dynamic that could easily lead to a regional or even world war.

Thus, the hell that has become the Middle East is being poked and prodded by U.S. foreign policy with absolutely no regard for the global implications. Both U.S. major presidential candidates are cheerleading the flood of blood to different degrees, ensuring that the next election will provide fresh “legitimacy” to an equally barbarous U.S. foreign policy.

Shamus Cooke is a social service worker, trade unionist, and writer for Workers Action (www.workerscompass.org) He can be reached at shamuscooke@gmail.com

Hit us when we’re down.