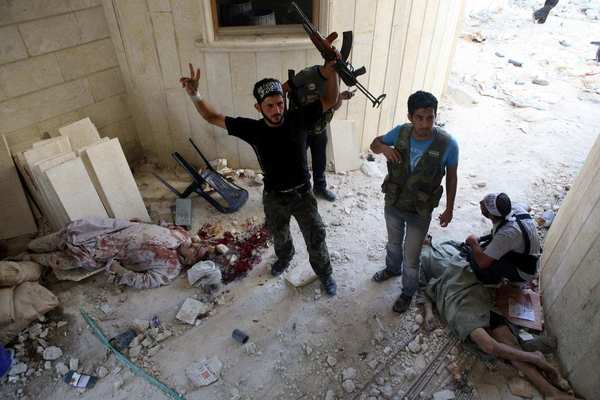 Rebels celebrating capture of a police station in Aleppo. Summarily executed policemen surround them.  If these men had been defenders of Assad, they would have been denounced from every pulpit in the American media.

The performance of the Western media (American, British, French and others) regarding the Syrian conflict has been quite shameful. One does not expect much from American media. Ill-informed foreign editors and correspondents and political cowardice turn American media into tools of US foreign policy.

This is especially true when it comes to coverage of the Middle East, where extra political courage and uncharacteristic level of knowledge and expertise are rather rare, even though they are essential to challenging US foreign policy. But when it comes to Syria, British media – including the liberal Guardian which has often been brave in challenging Western foreign policies and wars – have been indistinguishable from American media.

These media have failed their readers on many levels. Their shortcomings can be summarized as follows:

1. Resorting to methods of documentations that are never accepted when covering the Arab-Israeli conflict; like the reliance on accounts of people through Skype and email whose names are not obtained through a random process, and the reliance on Saudi or Qatari press media offices.

2. Hiding behind the cliché that “the Syrian government does not allow journalists in” to justify the various anthologies of errors contained in media reports. Many journalists have either been allowed in or have managed to sneak in, so the general disclaimer used daily in the New York Times is inaccurate and misleads readers. Such a disclaimer is never used against Israel, which imposes rigid forms of censorship on reports emanating from Israel, especially when Israel is perpetrating its regular war crimes and massacres.

3. The reliance on exile Syrian opposition reports without any scrutiny or healthy skepticism.

4. The assumption that Saudi-funded or Qatari-funded media outfits don’t carry the agendas of those governments.

5. Obscuring on purpose the heavy role of the Muslim Brotherhood in the Syrian exile opposition in order to project a deceptive image of a secular opposition.

6. The role that most Western journalists and correspondents have played on Twitter to cheerlead the Free Syrian Army and the Syrian exile opposition. The pretense of objectivity is discarded.

7. The consistent reliance (especially in the US press) on “experts” from the Zionist Washington Institute for Near East Policy as if it has no ideological lobbying agenda. Reference to that institute only informs the readers of its political slant – to put it mildly.

8. The deliberate distortion and mis-characterization of one side in the conflict.

9. The insistence that Bashar al-Assad has no power base in Syria – outside of the Alawi community – when the endurance shown by the regime requires more than a resort to brute force, which the regime is known for.

10. The gap between past coverage of Syria which disregarded human rights violations by the Assad regime during its years of understanding with Western governments and the sudden discovery of the brutality of the regime.

11. The obsession with Israeli concerns: the media audaciously covers the Israeli-originated story about Syrian chemical weapons without ever mentioning the vast arsenal of Israeli WMDs.

12. Lack of verification of published information.

13. Blurring the lines between editorial policies and media reports – this has been true even in The Economist – one of the best samples of modern journalism.

14. Covering the story of Syria from other capitals, primarily Beirut, where the press corps is highly dependent on the services, suggestions, and even instructions of the Hariri press office. (The former CNN bureau chief now works for the Hariri family).

15. Fear of challenging assumptions and orientations of Western policies.

16. Lack of irony in reporting about Qatari and Saudi support for democratic struggle in Syria.

17. Covering up war crimes and other misdeeds by the Free Syrian Army.

18. The reluctance to report on foreign jihadi fighters in Syria until the US government admitted their presence.

19. The tendency to echo one another in the coverage.

22. The pattern of reliance on reporters who don’t know Arabic and don’t know the region continues. The New York Times continues to send reporters who have covered American politics or the police beat in NYC to cover the Middle East region.

There is no accountability and it is unlikely that someone is going to write a book on the shortcomings and failures of Western media. Western media also marketed the Libya story and they were never made accountable for the lies they peddled there.

ABOUT THE AUTHOR
As’ad AbuKhalil Arabic: أسعد أبو خليل (born March 16, 1960) is a Lebanese-American professor of political science at California State University, Stanislaus.
AbuKhalil is the author of Historical Dictionary of Lebanon (1998), Bin Laden, Islam & America’s New “War on Terrorism” (2002), and The Battle for Saudi Arabia (2004). He maintains a blog, The Angry Arab News Service.  He was born in Tyre, Lebanon, and grew up in Beirut. He received his B.A. and M.A. in political science from the American University of Beirut, and a Ph.D. in comparative government from Georgetown University.  AbuKhalil is a professor at Cal State Stanislaus and was briefly[1] a visiting professor at UC Berkeley.[2] In addition, he has taught at Tufts University, Georgetown University, George Washington University, Colorado College, California State University Stanislaus, and Randolph-Macon Woman’s College.[3]

AbuKhalil describes himself as “a former Marxist-Leninist, now an anarchist”,[4] a feminist, and an “atheist secularist”.[5] AbuKhalil is vocally pro-Palestinian, describes himself as an anti-Zionist, and supports one secular state in historical Palestine.[6] He is an opponent of the Iraq War. He is critical of Israeli government, of United States foreign policy, of Saudi Arabia, of both Fatah and Hamas, and of all rival factions in Lebanon.[4][7][7][8][9][10][11]

_____________________
Selected Comments
Submitted by Anonymous (not verified) on Thu, 2012-08-02 07:15.
Actually The Guardian is going against the mainstream this time too. It supports intervention in Syria while the majority of public opinion in the West is against it, evidenced by the number of Westerners who comment here in support of the Assad regime.
Submitted by lidia (not verified) on Thu, 2012-08-02 21:38.
Actually The Guardian is playing the same dirty role as before colonial war on Iraq – calling to “liberate” Syria by NATO bombs. It is very “mainstream” in imperialist camp. The majority in UK could be against it – at least for now, but who cares? They were against war on Iraq too. It is called “liberal democracy” to not give a rat’s ass for what the majority want in case the “free press” somehow could not lie the majority’s brains out to support one more imperialist crime.
Anon is sure like to twist the plain facts, but no amount of spin could change the reality – Western media are but a tool of imperialism.

Submitted by Anonymous (not verified) on Thu, 2012-08-02 06:57.
Most of the points you made can be applied in reverse to Sharmine Narwani who visited Syria and told us everyone loves B. A..

Submitted by lidia (not verified) on Thu, 2012-08-02 21:35.
I dare anon to cite Sharmine’s writings with “everyone loves BA”. Sure, to tell anon that not everyone hate him (as NATO/GCC/Zionist media claim, excluding only “shabiha” from “everyone) is a sin, but why lie?

The Stage Is Set for a Venezuela October...

Maupin on Wahabism & the true nature of...