Our Rome correspondent Gaither Stewart has filed this little gem of an interview with the controversial author. We trust it will be of interest to many of our readers.—Ed 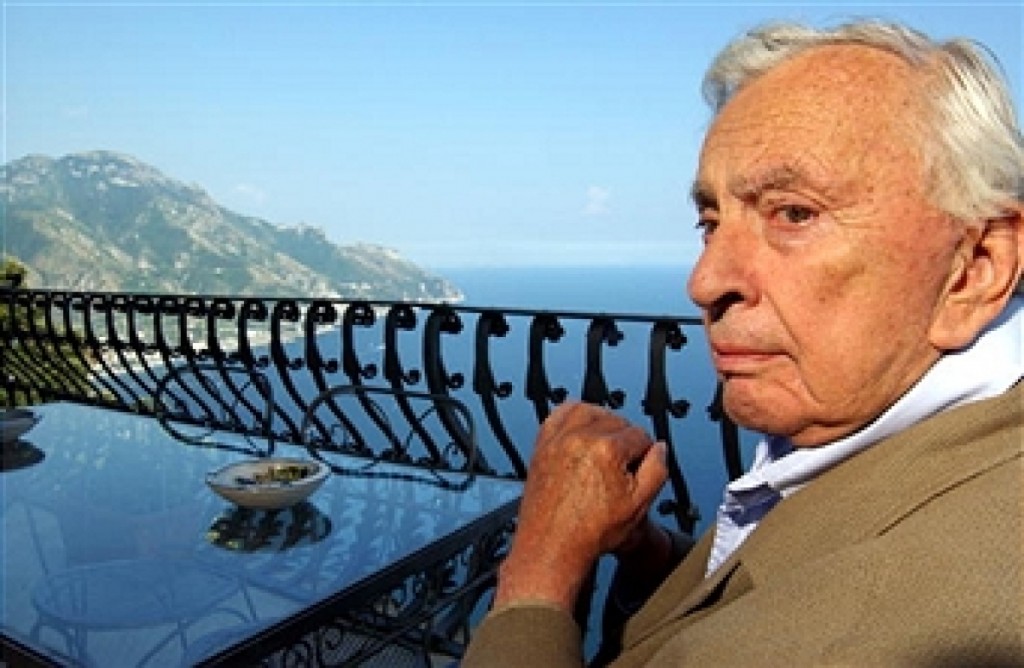 Vidal lived large, unapologetically, and his villa in Ravello, on the Amalfi coast,  remains a must-see location for the knowledgeable visitor.

DATELINE (Gaither Stewart in Rome) When I interviewed Gore Vidal in October, 1983, in his penthouse apartment on Largo (Piazza) Argentina in the very center of Rome, he related the time a lady from the New York Times asked as her first question: “Mr. Vidal, you really hate the United States, don’t you.” He answered: “No, I hate the New York Times.”

Like the time, he recalled, he was introduced on an NBC television show as “the outrageous Gore Vidal”, he stopped the show when he asked why outrageous. “Ronald Reagan is outrageous,” he replied.

During the over two hours we spoke about politics and literature which I recorded on tape, Vidal never once minced his words or resorted to niceties toward anyone or anything. Forever irreverent as was his nature.

From the huge transcript, I fashioned articles subsequently published in various European leftwing newspapers and magazines, including L’Unità, the official daily newspaper of the Italian Communist Party, De Morgen, the major Belgian Socialist daily in Gent, The Haagse Post, an Amsterdam leftwing weekly, and others I no longer recall.

We tried sitting on his terrace overlooking Piazza Argentina and the ruins of four Roman temples but the noise from the late Sunday afternoon traffic was so deafening we soon retired to the huge salon. Yet this apartment that he had owned for 20 years, he called his retreat, reserved for work—reading and writing and thinking. The only reason he agreed to the interview here was because I lived in Rome.

Gore Vidal was the only major writer of the “group of 1948” to remain in Italy, “a short golden year of American arts,” he said, “the first period we could remember without an American war.” Still, he was never an exile, never an expatriate; rather very American and continued to spend much time in the USA, always involved in US politics.

American artists were all over a cheap Europe in the early post-war period. And they all passed through Rome: that catastrophic driver Tennessee Williams, writer and composer Paul Bowles, William Styron, Normal Mailer and Saul Bellow. Here on the loud Rome piazza he wrote his famous Myra Breckenbridge. Though the figure of Gore Vidal that Sunday loomed larger than expected against the reflections of the flashing lights from the heart of Rome below us, I had the thought that we could just as well have been in New York or his beloved California.

Rather than try to reconstruct the interview, I have recalled here some of his chief political points, familiar to older readers, but most likely new to the younger generation, which Vidal describes as a ‘non-reading generation.’ Surprisingly, most of his words of nearly 30 years ago ring quite contemporary today.

In his book Duluth he attacks the American social order, disproving the NYT lady who accused him of hating the American people. “Anyone who attacks that social order gets creamed,” he noted. “I hate the system; the banks and the bankmen, an educational system that that makes sure that 95% of the population grows up to be docile workers and consumers, paranoid taxpayers and eager warriors of the bank’s never-ending struggle with atheistic Communism.”

“American leaders never deal with real political and social problems. The Founding Fathers feared most of all democracy and monarchy and saw to it that we could never have either. We should scrap the Constitution and start over. It is only a document to protect property owners while America has the weakest union movement in the Western world, with only 20% of workers organized. I attack the system that has done this to the American people. Meanwhile we should get rid of both the New York Times and the Constitution.

“If Italy’s problem is its wonderful Constitution that is never applied, the US problem is the Constitution itself. We need a new Constitutional Convention and should point toward a parliamentary system. As it is today we have two parties: one of the Democratic and Republican parties; the other of those who don’t vote. I belong to the latter.

“On the other hand the people are not concerned about real problems either. Americans don’t vote, while corporations select and pay for the politicians and get the Senators and Presidents they pay for. They function like Italy’s mafia that buys its votes.

“The Left-Right classifications are complex. I have said I am a man of the Left. But I think we need a new definition of the Left and its goals and how they can be achieved. It’s a good thing for people to govern themselves but it must be explained how it can be done. We need a new document, a new analysis, a new synthesis of those goals.”

Gore Vidal, 30 years ago, saw literature in a grim situation. “In my visits to some 125 university campuses I have seen that literature has become something that is taught, not actually read. Literature is chiefly a subject of university study. Even that wouldn’t be so bad if the universities preserved the best of our literary past, Instead, it is often a case of Professor x writing a book and Professor y teaching it in his classes. The university campus is not real life, but 90% of our writers are connected with universities.”

Vidal never became involved in the Italian literary world—he told me he spoke Italian so poorly. Though as a rule he was harsh with other writers, he read and respected quite a few Italian writers, admittedly also to spite American critics who have little regard for Italian letters. He took time to point out the failure of literary critics to interpret and illuminate Italian literature abroad. He admired Italo Calvino; they read each other and corresponded but hardly met in person. He liked Giorgio Bassani, Alberto Moravia, and Leonardo Sciascia whom he introduced to the United States in articles in the New York Review of Books. . He considered Mario Praz the greatest critic of the 20th century, Praz who is better known in the Anglo-Saxon world than in Italy itself. He was very pleased about the success of Umberto Eco’s world-wide best-seller, The Name of the Rose.

That Sunday in a hectic Rome Sunday evening in late fall was the only time I spoke with Gore Vidal. I would like to have known him better. He was reserved and seemed to defend with tooth and nail his time and energies. However, I have read some of his work, including his first novel, Jim, in Italian, written when he was 21. I read his great Creation, a journey through major world faiths; Dark Green, Bright Red, a powerful, compelling work set against a background of revolution in Central America; his popular novel, Burr; and a collection of his essays entitled The Second American Revolution And Other Essays, 1976-1982.

Vidal was not the only erudite writer to tackle historical fiction, but he was certainly the most prominent in the latter part of the 20th century.  The genre is somewhat despised by publishers, so the success of Burr and other titles penned by Vidal using the tricky format of novelized history is a testimony to his art and influence in the literary world.  Personally, as a writer of fiction who has often relied on “plausible history” to weave his plots, I find his example encouraging.

_______
Based in Rome, world-class traveler TGP Senior Editor GAITHER STEWART serves —among other things—as our valued European correspondent. His novel Lily Pad Roll, focusing on the expanding web of US military bases around the globe, is to be published this fall by Punto Press Publishing.