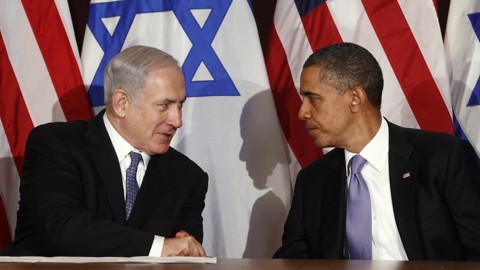 How can the world still tolerate leaders like these? The problem is the media. And behind the media, corporate power.

Israel is very much involved in Washington’s war on Syria. At issue is destroying another independent state, murdering thousands, planning more wars, and threatening the entire region and beyond.  Iran is next in line. Saber rattling combines with war by other means. It includes sanctions, subversion, instability, cyberwar, targeted assassinations, other disruptive actions, and relentless scoundrel media vilification and fearmongering.

On August 3, Haaretz headlined “King Bibi in trouble.” Poll numbers show a 60% disapproval rating. It’s not for institutionalized militarism and belligerence. It’s about new budget cuts hardening neoliberal harshness.  Most Israelis are fed up with what harms their well-being. Their narrow definition omits likely blowback from regional wars and more planned. Conflict rages cross border in Syria. If attacked, Hezbollah can respond in kind.

On August 2, Haaretz headlined “Ex-Mossad chief said what should be clear to everyone – Israel has never been so close to attacking Iran,” saying:

According to Ephraim Halevy, “if I were an Iranian, I would be very worried about the Israeli talk about a possible attack, because Israel’s threats sound serious and credible to me.”

No longer publicly active, he may or may not know what’s planned. Haaretz said he’s not “another establishment stooge.” Nor is he “gung-ho.”   He’s wise enough not to reveal state secrets. Perhaps he commented because someone asked. Once a Mossad insider, always one. Iranian officials will parse his comments carefully.

DF claims he told them “(w)e’ will be at war within weeks.” Allegedly he ordered high alert readiness, fortifying Iran’s nuclear facilities, and retaliatory responses.

“Why aren’t ministers and defense officials standing up right now, when it is still possible, and saying: We will not be a party to this megalomaniacal vision, to this messianic-catastrophic worldview?”

As important is why militarism, belligerence, and denigration of Muslims define Israeli policies. Why is war institutionalized?

Why does a nation treat one-fifth of its people like fifth column threats? Why are non-Jews persecuted? Why do decades of occupation repression continue?

Why do only elitist Jews matter at the expense of all others? Why does a tiny state threaten other regional nations? Why do world leaders permit it? How can any responsible official contemplate catastrophic war if launched?

Haaretz suggests “Netanyahu has a historical mindset (and) outlook under which….Israel is ‘the eternal nation’ and the United States” is just one among many.

In other words, “(w)e are everlasting, we are an eternal people, and they, despite all their strength and power, are merely temporary and ephemeral.”

Megalomania and delusions of grandeur define this type thinking. Past leaders governing this way perished by the same sword they lived by. It always turned out that way.

Tiny Israel is a dot in an ocean of justifiable resentment. One step too far may bite back harder than what Netanyahu and others around him imagine.

His governing style is autocratic, said Haaretz. He thinks he holds Israel’s destiny in his hands. He may end up fiddling while it burns. His hermetic worldview rigidity may end up its undoing.  He’ll take an entire nation and others over a cliff with him. Perhaps he’ll end up like Caligula. Delusions of grandeur and tyrannical harshness got him assassinated. His own Praetorian Guard did him in. Netanyahu heads Israel’s most extremist ever government. It’s racist, repressive, elitist and fascist. Democracy is more hypocrisy than real.

Hardliners around him share his vision. Most Israelis want peace, not war. They have no say. Their fate hangs in his hands. It’s their country, their security, and their future.  Don’t they understand the consequences of attacking Iran? Have they no sense that “bomb or be bombed” rhetoric is belligerent bombast? Don’t they know destructive policies sometimes follow?

Iran threatens no one. Its nuclear program is peaceful. Every Israeli and Western leader knows it. Saying otherwise hides dark side intensions.

Have they no sense of the stakes? Don’t they care enough to try? Are loyalty and daily priorities more important than survival? Are millions of Israeli lives and others in the region unimportant?

Why haven’t Israelis protested publicly en masse? Why won’t they act in their own behalf?  Poet Hayyim Bialik (1873 – 1934) once wrote about “with heart’s blood and marrow pay(ing) the price of the blaze.” A century later he’d have had weapons of mass destruction in mind.

Netanyahu is mirror opposite. He said governments make policies, not generals. Their job is taking orders and obeying. Other times they’re asked for advice. Prime ministers and cabinet members can accept or reject it.

George Clemenceau once said “(w)ar is too important to be left to the generals.” In Israel, some have more good sense than politicians. The same holds for America. Delusional leaders can’t wait to shed more blood.

Gantz calls unilateral Israeli action ill-conceived. Other current and past IDF generals and intelligence officials share his view. Many in America feel the same way.

Instead of waging wars, preventing them should be prioritized. When leaders able to cause mass destruction behave like delusional mad dogs, stopping them matters most.

Stephen Lendman lives in Chicago and can be reached at lendmanstephen@sbcglobal.net.  His new book is titled “How Wall Street Fleeces America: Privatized Banking, Government Collusion and Class War”