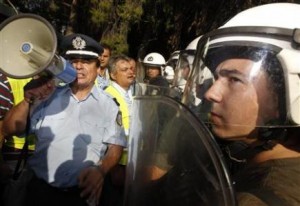 The brave Greeks show the way, once again.

(Reuters) – Greek police protesting against austerity cuts blocked the entrance to the riot police headquarters on Thursday, preventing buses carrying riot police from leaving for the site of major demonstrations this weekend.

Scuffles broke out as riot police tried to clear the entrance of several dozen police union members – many in uniform – chanting anti-austerity slogans and holding banners.  “They would not let riot police buses depart for Thessaloniki,” a police official said, referring to the northern city hosting a weekend trade fair where anti-austerity demonstrations are planned.

Some riot police appeared reluctant to tackle uniformed officers. “They make us fight against our own brothers,” said one riot policeman who declined to be named.

The government plans to slash police pay in a new round of spending cuts worth nearly 12 billion euros over the next two years. The savings plan is expected to provoke new street protests in the coming weeks by austerity-weary Greeks fed up with repeated wage and pension cuts.

Hurrah! We Did It! Protests, Petitions, Articles, Letters Got NBC to Cancel Deplorable War is a Game Show

How Do We Get People Into the Streets?

The Triangle Building fire changed things, or did...