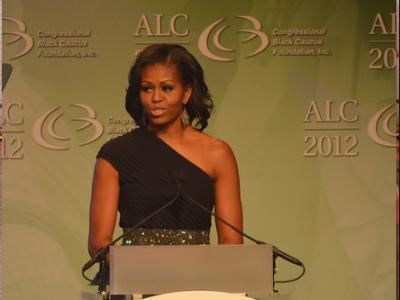 If, as Michelle Obama claims, “voting is the new movement,” then Black people are going nowhere. Absent a genuine people’s struggle, the periodic ritual of voting empowers only “the same class that abandoned mass movement politics 40 years ago, in favor of pursuing their own corporate and electoral ambitions.”_______________

“A class that is concerned mainly with celebrating its own existence.”

Michelle Obama was the main attraction at the Congressional Black Caucus’s annual Legislative Weekend gala affair. She told the party-goers that voting, “going to the polls every single election…is the movement of our era.” That is part of the great tragedy that has befallen Black America. The same class that abandoned mass movement politics 40 years ago, in favor of pursuing their own corporate and electoral ambitions, now claims that going to the polls every couple of years is the same thing as having a movement. And that’s got a lot to do with why, by many key measurements, Black people are as bad off, or worse, than in 1965.

Some of us remember the days, after Martin Luther King’s death, when the aspiring Black political class lectured movement activists to get out of the streets and into the suites. They said Black folks needed to position themselves on the inside of power where they could, supposedly, do the most good for the Black masses. But these selfish actors were only looking out for their own upward mobility.

It would be unfair the say that these misleaders shut down the Black Freedom Movement in the late Sixties – the U.S. government’s hit squads made their own murderous contribution to the death of the movement, and a national policy of mass Black incarceration put lower class African Americans on permanent lockdown.

“Our history did not prepare us to fight Power when it wears a Black face.”

But some segments of Black America have done pretty well for themselves, as is on display every September at the Black Caucus weekend. With Barack Obama in the White House, the Black common folk experience a vicarious sensation of power – which, as it turns out, is not a very healthy thing, since African Americans as a group have never gotten anywhere without fighting the Powers-That-Be. However, our history did not prepare us to fight Power when it wears a Black face, a problem few of us ever expected to confront. It appears likely that we will experience another four years in which the Black political class makes no demands of Power, so as not to discomfort or embarrass the First Black President in his second term, a man who serves the financial oligarchs on Wall Street, not the folks on Martin Luther King Boulevard.

The Black Caucus also honored Eric Holder, the first Black U.S. attorney general. Holder has failed to prosecute any of the Wall Street plutocrats whose criminal financial enterprises threw millions out of work and set Black America back two generations. It was Holder’s job to explain why his boss’s preventive detention bill was not a death blow to due process of law in the United States – an impossible task. Even in the Age of Obama, most of the Black Caucus opposes indefinite detention without charge or trial – but not enough to let a little thing like the Bill of Rights get in the way of honoring a “first Black”…anything.

This is the logical end-result of what people like professor and preacher Michael Eric Dyson cynically call “getting in the game”: the empowerment of a slim sliver of a Black Misleaderhip Class that is concerned mainly with celebrating its own existence. That’s what happens when the money-soaked rituals of American electoral politics are mistaken for a people’s movement.

Talking Peace and Justice with Ahmadinejad