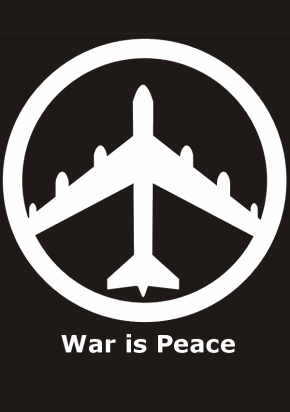 The Nobel Committee did it again. The essence of its highest award, the Nobel Peace Prize, has been perverted. It’s been turned into a propaganda tool, a form of institutionalized revisionism, for which war is upheld as a peaceful endeavour, creeping alongside power struggles called “humanitarian interventions” in a fantasy tale we call history.

Neither Henry Kissinger, nor Barack Obama and the European Union (EU) deserved a peace prize. How can the EU deserve a peace prize when it’s been using its military might in the Middle East and Africa for over a decade? As David Swanson notes:

“Europe […] has not during the past year — which is the requirement — or even during the past several decades done the most or the best work for fraternity between nations.  Ask Libya.  Ask Syria.  Check with Afghanistan.  See what Iraq thinks.  Far from doing the best work to abolish or reduce standing armies, Europe has joined with the United States in developing an armed global force aggressively imposing its will on the world.  There were good nominees and potential nominees available, even great ones […]

In addition to waging war with murderous weapons, the EU also uses “economic weaponry” directed against civilians, such as the sanctions it imposes on Iran. Unlike the EU, Iran has not invaded or attacked any country and the reasons justifying the economic sanctions are pure fantasy. Kourosh Ziabari explains:

[T]his union has aggressively declared an all-out, bloodless war on Iran, affecting millions of innocent civilians in my country who can’t understand for what crime they are being targeted and punished in such a belligerent and unfair manner.

The European Union began to impose an inclusive oil embargo against Iran since July 1 as a result of direct pressure and lobbying by the United States and in an effort aimed at paralyzing Iran’s nuclear program which they claim is not aimed at civilian purposes, and finally breaking the back of Iran’s economy and pressuring it into making political concessions […]

Sensitive medicine and pharmaceutical products which were previously imported from the foreign countries cannot find their way to Iran’s markets anymore and thousands of patients badly in need of medicines for such diseases as thalassemia, hepatitis, diabetes, different types of cancer, heart diseases and psychiatric disorders are facing serious problems with finding their medicines.

Waging wars does not take place simply by means of bombarding cities or dropping nuclear bombs on other nations. What the European Union has been doing with Iran is the unmistakable representation of an all-out war in which the ordinary citizens are the silent victims. (Kourosh Ziabari The Nobel Peace Prize for Those Who Declared War on My Country)

The odd Nobel Laureate is waging a financial war on its own members as well as the cases of Greece and Spain illustrate:

How can you award of a Peace Prize – of all things! – to an entity that systematically supports the economic and social destruction of Greece; imposes extreme hardship on Spaniards and Italians whilst it supports greedy mega-bankers; has an undemocratically elected president (Herman van Rompuy) and, through its NATO war machine, continues bombing and destroying Afghanistan, Iraq, Libya, and is now poised for unilateral attack against Syria and Iran? Indeed, “Peace” should be made of sterner stuff!! (Adrian Salbuchi, The European Union Grabs the 2012 Nobel Peace Prize)

But in addition to its internal economic warfare and its plea of moral duty to promote war abroad and assert its position on the global chessboard, the EU is not an eligible candidate for this prize. According to Michel Chossudovsky:

While the EU’s contribution to peace is debatable, the key issue is whether a union of nation states, which constitutes a political, economic, monetary and fiscal entity is an “eligible candidate” for the Peace Prize, in accordance with the mandate of the Norwegian Committee.

The Olympic Games are “granted” to countries. But the Nobel Peace Prize cannot under any stretch of the imagination be granted to a nation-state, let alone a union of nation states. (Michel Chossudovsky The EU is not a “Person”: Granting the Nobel Prize to the European Union is in Violation of Alfred Nobel’s Will)

Has the Norwegian Nobel Committee become Orwell’s worst nightmare, where war is peace? To understand their nonsensical choices over the years and what to expect in the future, one has to wonder who and what does the Nobel Committee represent?

If the Nobel Peace Prize is delusional, the victims of the EU’s warfare will tell you the horror of war is real.

Global Research offers its readers a list of selected articles on this topic.

The Nation magazine and the campaign to reelect Obama

After all, Assange is facing extradition to Sweden for questioning in a
rape case. “Let each one of us build bridges rather than barriers, openness rather than walls. Relationships amongst people are difficult but they are oh, so valuable and rewarding.