Not the real article, but a cleverly packaged corporate product.

“This process, whereby the ideas of the ruling class permeate society as the ruling ideas, is the exercise of hegemony.” 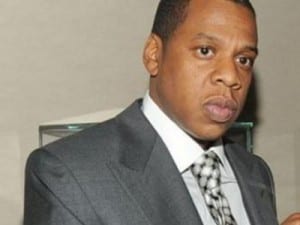 by Damon Sajnani
Jay-Z has earned mountains of money from HipHop, but “his politics are diametrically opposed to the interest of Black liberation at home and abroad.” The music mogul identifies with an oligarchy whose interests are antithetical to Black liberation. “If the balance of one’s material promotes the interest of the oppressor, that rapper is not HipHop.

Jay-Z is a highly talented rapper—he has undeniable lyrical skill. Of course, so do tens of thousands of other rappers who you will never hear of. As we know, talent is far from the primary arbiter of success in industry. Something more explains his ascendance. He is also an adept businessman who organically understands the profitability of promoting the interests of oligarchy in such a way that the masses mistake those interests as their own. This process, whereby the ideas of the ruling class permeate society as the ruling ideas, is the exercise of hegemony. Hegemony—though often used interchangeably with imperialism—has a distinct meaning. It is the stage after imperialism, once imperialists have gained their dominance through violence and coercion, they move to consolidate their power by cultivating the consent of the colonized. This is the creation of what Malcolm X derogated as the mentality of the “house Negro,” by which the oppressed identify with the oppressor.

The dominant class must always perpetuate such a mentality among subordinates, and this manifests as official—or mainstream—culture. Culture is the framework by which distinct groups attribute meaning to the social and material world. It frames, explains, and justifies the operation of its social formation. As such, it is the deepest level of ideology. American culture frames, explains, and justifies what America is and does.

“Jay-Z is an adept businessman who organically understands the profitability of promoting the interests of oligarchy in such a way that the masses mistake those interests as their own.”

America is the reigning, though waning, seat of capitalist imperialism. Among other things, it is an enslaver of Africans, exterminator of aboriginals, environmental devastator, global terrorist, captain of neo-colonialism and chief beneficiary of these crimes. To be pro-American does not mean that you support Americans, but that you buy into the propaganda that allows the richest Americans to collude with the richest global elites elsewhere, to the detriment of the world’s people including the majority of Americans. American culture is the set of beliefs, practices and ways of living that support America as such.

Black culture is anti-American. To many, especially in the contemporary moment, this statement seems fallacious, even infuriating. But a clear understanding of culture as outlined above, and of Blackness as outlined below, makes the truth self-evident. As countless Black scholars at least since Du Bois have shown, race is a social construct not a biological fact. The context of this construction is European colonialism and trans-Atlantic African enslavement. This is the socio-politico-economic underpinning of the modern concept of race and the dominant racial groupings that exist today. This racial hierarchy created whiteness as the pinnacle group to justify the domination and exploitation of all other groups. Despite the formal abolition of slavery, colonization, and legally explicit racial segregation (except in places like Palestine-Israel), these institutions continue in modified forms and Whiteness continues to globally bestow privilege on whites as well as those of us who opt to collude with white supremacy. In every defensible sense—material, psychological—it is in the interests of Black people to oppose white supremacy. Of course, as we all know, this does not mean it is in the interests of every black person to oppose it—since collaboration is sometimes a question of personal survival and other times a lucrative prospect—but blackness is a collective identity, regardless of individual interests, the collectives interests are opposed to white supremacy by definition.

“In every defensible sense—material, psychological—it is in the interests of Black people to oppose white supremacy.”

Interests are the basis of ideology and, as mentioned above, culture is the most fundamental level of the ideological. This is the understanding from which all luminaries of Black consciousness have proceeded: Du Bois, Garvey, Fanon, Cabral, Malcolm X, Newton etc., all recognized that black liberation required the cultivation of Black culture. Black culture, in the context of the world we live in, is by definition a counterculture to white supremacy. Therefore it is necessarily a counter-hegemonic formation to the reigning beneficiary and enforcer of the new iterations of the old white supremacy—America.

Writers on Black culture have always acknowledged that Black culture is a counter-culture to—not merely a sub-culture of—American culture, but they rarely appreciate the import of the word “counter” in this context. It means that when we judge whether a cultural production is Black or not, we cannot determine this simply by considering the race of the creator. We have to consider the cultural values that are embedded in the production. Do they promote global Black solidarity and liberation or do they profess fidelity to America and perpetuate the myth of American nobility? In an America that jails more people than anyone in the world, where poverty and destitution is more widespread than under Jim Crow, and on a planet where Euro-America still helms a global economy that sucks the blood of two-thirds of the worlds people—mostly black and Brown—these options are mutually exclusive.

HipHop is not merely music, it is a culture—it is an explicit, powerful, confrontational iteration of Black culture. It arose among disenfranchised Black and Brown youth in the Bronx to manifest their freedom and voice their humanity, and has been taken up worldwide to combat oppression globally. Some argue that the political intentions of early HipHop—and by extension HipHop tout court—have been overstated. It is argued, for instance, that much HipHop has always been more about partying than politics. But a distaste for party politics should not elide the politics of partying. In other words, this misapprehension of HipHop’s inherent politics proceeds from a narrow understanding of politics, that fails to recognize the political significance of manifesting self-love and asserting one’s entitlement to joy under a system and amidst a culture that constructs love and happiness as the commodified preserve of the wealthy and (mostly) white.

A rapper is measured by lyrical skills—or at least used to be. An Emcee is measured by fidelity to HipHop culture, which entails solidarity with Black liberation. This does not mean an Emcee must be Black, nor that all their material most be expressly political, but it does mean that if the balance of one’s material promotes the interest of the oppressor, that rapper is not HipHop.

“Jay-Z is about the one percent and he is as pro-America as one can get.”

I opened by noting Jay-Z’s proficiency as a rapper and business savvy in terms of recognizing the profitability of collaboration with oligarchy. In his 2012 electoral campaign ad for Obama [5], the president says, “to me the idea of America is that no matter who you are, what you look like or where you come from you can make it if you try, Jay-Z did. He didn’t come from power or privilege; he got ahead because he worked hard.” Of course, this is not just Obama’s idea of America, this is the simplest and most familiar expression of the American ethos—a blatant disavowal of the factual reality of systemic socioeconomic stratification and the intersectional oppressions of race, class and gender.

When interviewed by CNN about the economic crisis, and the asymmetric recovery whereby rich people and corporations profit while “main street” does not, Jay-Z responded [6], “What we have to be really clear about is that America is built on free enterprise, so we don’t want to knock anyone for being successful in America[.]” Right, the “free enterprise” of slavery. Tellingly, his push back against any economic analysis of oppression is so sweeping that the interviewer interprets his comment as an endorsement of Romney over Obama. He promptly clarifies himself, however, making it clear that he supports Obama while admitting “I don’t know anything about… Mitt Romney.” Jay’s defense of “successful businessmen” is a rhetorical counterattack on the Occupy movement—which Jay pondered capitalizing upon by selling “Occupy T-Shirts” and keeping the profits but whose message he has no sympathy towards.
It is clear that Jay-Z is about the one percent and he is as pro-America as one can get. As Lowkey put it [7], “we have to question, when the US government loves the same rappers that you love, whose interests are those rappers serving?” Contrary to Jay’s ostensive HipHop swag, his politics are diametrically opposed to the interest of Black liberation at home and abroad. Like Obama, he is a mouthpiece for imperialism, corporate America’s best yet embodiment of the co-optation of HipHop and the reassertion of hegemony.

Don’t get it twisted, the struggle continues.

Postmortems: Ohio and an Attempt to Cheat the Vote?

I have been saying this for years. Even before he became the (self proclaimed) best rapper/hip hop icon of our time, Rocafella were clearly all about the money and material gain. Only people that were interested in the same things bought into that music and there weren’t that many. Hip hop had variety. Substance was everything and Jay-Z, in my opinion, has never had any.