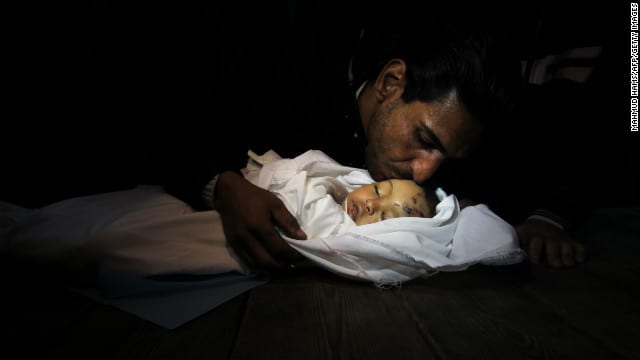 Palestinian father kisses baby girl killed by recent Israeli airstrike. While Israelis also suffer occasional casualties, the ratio of dead and wounded is grotesquely stacked against the Palestinians, a reflection of their lack of heavy weapons, including tanks, air force, a navy and so on, not to mention extremely sophisticated rocket delivery systems. Meanwhile, as this endless war rages, in lalaland the inhabitants, whose country has so much to do with this horrid situation, prepare for their Thanksgiving fest while the networks burn scandalous amount of time in the usual frivolities, including countless shopping and cooking shows. How long can a superpower like this stand without collapsing from moral rot?—PG

Since 1948, Israel waged varying intensity war on Palestine. Crimes of war, against humanity, and genocide are committed regularly. World community inaction lets Israel get away with murder.  Operation Pillar of Cloud (aka Cloud Column/Pillar of Defense) is Israel’s latest naked aggression.

“And the Lord went before them by day in a pillar of cloud to lead them the way, and by night in a pillar of fire; to give them the light; to go by day and night:” Exodus 13.21. 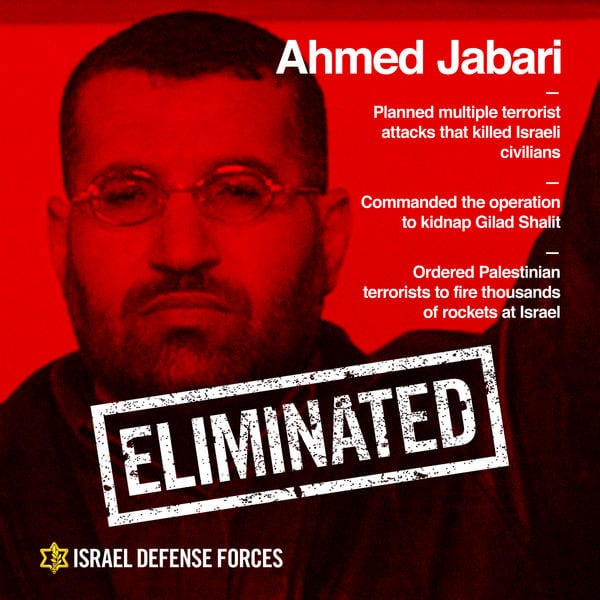 On the assumption that a hidden crime is more likely to be classified as a crime than an open boast, Israeli psyops cynically released this poster, announcing the death of Hamas leader Ahmed Jaabari. The dehumanizing treatment of Palestinians by the Zionist Israeli government is a stain on the long tradition of Jewish heroic resistance to oppression. In fact as the 2012 election indicates, most American jews, long the chief support for Israeli intransigence, seem to be walking away from Israel’s hard right crimes as standard policy.

He called for international action to stop it. Gaza’s main Al Shifa Hospital and other medical facilities can’t handle the severe casualties needing urgent treatment. At least 15 Palestinians were killed. Over 150 were injured. Expect casualty totals to rise. Israel shows no mercy. Unconfirmed reports suggest the IDF is using white phosphorous and other illegal weapons. It’s likely. Israel uses them in all its wars. New ones are tested in real time. Doctors report injuries never seen before.

Mondoweiss contributor Waleed al-Meadana headlined “Almost Dead: An eyewitness report from Gaza,” saying: “Death smells! Blood stains the walls. Pieces of grained human flesh spread everywhere, and broken glass is scattered. I can recognize a hand, and some parts of the head.”

“Trees are torn apart some steps away. They are laying dead. And a car is still firing. Or what is left of it. Appalled faces. Shaking voices.”  “The sky is weird. Gloomy clouds, bleak scenes, some kind of strange feeling alongside the smell of human blood, and children. Children are gathering up the remnants of the fragmented body.”  He lives in Gaza. He’s never been this close to Israeli crimes, he added. He’s witnessing Israeli barbarity firsthand. Before it ends, he may be lucky to survive in one piece. “Israeli arrogance….showers us with bombs and hate.”

Israel said a ground invasion “is only a matter of time.” An emergency November 14 Security Council meeting was held. Ban Ki-moon made his usual dismissive comment. He urged both sides to exercise “maximum restraint and to respect international law.”

Washington blocked possible condemnation of Israel. Ambassador Susan Rice is an unprincipled defender of naked aggression and mass murder. She ignored Israel’s premeditated war on Gaza. She condemned the victims.  “There is no justification for the violence that Hamas and other terrorist organizations are employing against the people of Israel,” she said. “We call on those responsible to stop these cowardly acts immediately.”

Comments like these don’t rise to the level of bad fiction. What’s happening in Gaza is very real. Since December 27, 2008, Israel murdered well over 1,500 Gazans, injured around 6,000, and caused widespread destruction of non-military related sites.

“Once again the international community is witness to Israel’s malicious onslaught, using the most lethal military means and illegal measures against the defenseless Palestinian civilian population. A direct firm message must be sent to Israel to cease immediately its military campaign against the Palestinian people and to abide…. by its obligations under international law. The Israeli occupying forces are now mobilizing on the ground as we speak. Fear and panic are spreading among the Palestinian civilian population.”

Israel perhaps is readying a large-scale invasion. The Palestine News Network (PNN) reported Israeli paratroopers and Givati Brigade members heading for Gaza’s border. IDF officials said Israel “will do whatever is needed to restore calm to Israeli towns in the south.”

PNN said IDF forces held training exercises in recent weeks. They’re preparing for a possible Gaza offensive. Increasingly it looks likely. Military commanders said its scale will exceed Cast Lead.  Netanyahu addressed Israelis on nationwide TV. He said Israel is prepared and ready for a large-scale offensive. In his November 14 press conference, Obama said nothing about Israeli aggression. He told Netanyahu and Egyptian President Mohamed Morsi by phone that Israel has the “right to self-defense.”

“We strongly condemn the barrage of rocket fire from Gaza into southern Israel, and we regret the death and injury of innocent Israeli and Palestinian civilians caused by the ensuing violence. There is no justification for the violence that Hamas and other terrorist organizations are employing against the people of Israel. We call on those responsible to stop these cowardly acts immediately…We support Israel’s right to defend itself, and we encourage Israel to continue to take every effort to avoid civilian casualties.”

“We believe one of the objective of these crimes is covering up the domestic problems of the Zionist regime.”

Syria also denounced what it called “barbaric Israeli crimes.” It called on the international community to condemn them. Condolences were extended to the families of victims. Arab solidarity is needed. So is worldwide support for a people victimized by Israeli savagery. US television so far ignored it. Print media reports one-sidedly support Israel. Naked aggression is called self-defense. On November 14, The New York Times headlined “Another Israel-Gaza War?” saying:

“No country should have to endure the rocket attacks that Israel has endured from militants in Gaza, most recently over the past four days. The question is how to stop them permanently.”

Blaming Israel’s victims is official editorial policy. Hamas and other resistance groups are condemned for defending themselves against savage Israeli attacks. At the same time, The Times called another full-scale ground war “especially risky.” Concern isn’t about mass killing and destruction. Cast Lead didn’t “solve the problem,” it said.

The unexplained problem is millions of Palestinians wanting to live free in their own country, on their own land. They want occupation harshness ended. They want Israeli aggression condemned and punished. They want long denied equity, justice and freedom. Hamas is Palestine’s legitimate government. The Times calls it “a dangerous adversary that may never accept Israel’s right to exist.”

It won’t ever accept Israeli belligerence and oppression. Nor do millions of Palestinians and worldwide supporters. The Times and other media scoundrels won’t explain.

Haaretz did no better. It editorialized irresponsibly. “Calm things down,” it said. Assassinated Hamas leader Ahmed Jaabari “dedicated his life to war against Israel.” Killing him tells Hamas to choose “more moderate” officials.

Responsible journalists should explain it. Running cover for lawlessness is unconscionable. So is global community silence.
International law obligates world leaders to condemn crimes of war and against humanity. It’s long past time Israel was held fully accountable.

Stephen Lendman lives in Chicago and can be reached at lendmanstephen@sbcglobal.net. His new book is titled “How Wall Street Fleeces America: Privatized Banking, Government Collusion and Class War” http://www.claritypress.com/Lendman.html

AIPAC Lobby Gets Drubbed in US Elections