This is how insidious systemic propaganda operates. Hiding its hideous face behind the visage of angels. 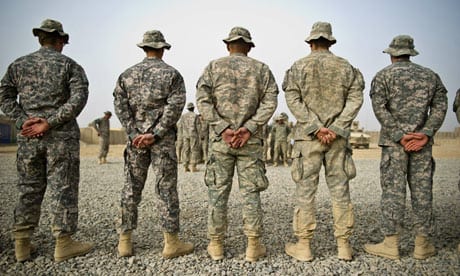 US soldiers in Afghanistan: conditioned by propaganda, precious few figure out the true motives for which they are fighting.

Using people who, in their misguided but honest support for what they regard as noble causes, end up serving the goals of a monstrous system devoid of any true morality.  In this context, the capitalist media, the grand ideological whore of the system, is happy to constantly sing the praises of the troops, men and women who, as heroes, according to the media, are out there exposing their lives to “keep us safe and free.” But we must ask: who are these “us”? America’s military adventures and crimes are certainly NOT keeping me or my fellow Americans safe. So who are the soldiers protecting? “Us” or “them”—the plutocracy? It all depends on who is the real “us” in this seemingly innocent and practically never challenged assertion.

Fact is, this is a grotesque lie (we will devote space to examining it on a different article). The plutocracy and its minions use it because it works. Most people understandably have difficulty separating the troops from their mission, and fail to realise that by sanctifying “the military” (in the abstract) they end up endorsing the filthy, unnecessary wars the ruling cliques continually enmesh America in with no real effective opposition from the people or their supposed representatives.  As America’s war tentacles continue to reach ever more territories, create more sworn enemies for us—a real treat indeed to our security—and soldiering becomes a  default occupation for the economically distressed or countless “patriotic fools”—those who can’t distinguish between America’s legitimate self-defense needs and the military goals of the ruling class—we see television packing more and more mawkish, adulatory stories about people in uniform—a natural dramatic turf.  After all, it’s in the interest of the 1% to flatter those who do their dirty work. But if this isn’t cynicism, what is?

FFS. Heartbreaking. Seems like the kind of intelligent, good-hearted kid who will have her bubble busted when she gets older and learns more about the world and the place of the American military in it, with predictably devastating results: before long she’ll turn into a pacifist socialist godless feminist blogger!