Cory Booker: The Second Coming of Obama – Only Worse 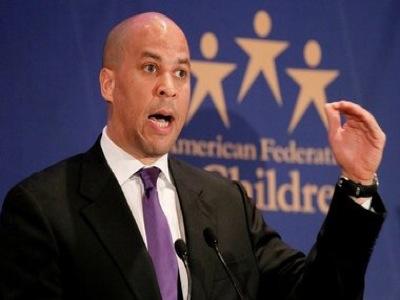 Cory Booker: Rising flotsam, it never ends. Another big-mouth charlatan designed to pseudo-lead the masses. Glen Ford is right in zeroing in on this new class of Uncle Tom. Anyone surprised the media gives him so much preferential attention?—Eds

A Black Agenda Radio commentary by Glen Ford
The Lords of Capital have more than one Great Black Hope. “If there had been no Barack Obama, Cory Booker would have been Wall Street’s choice as the First Black President.” Newark’s mayor is fiercely loyal to his friends in the ruling class. “One thing Cory Booker cannot abide is anyone bad-mouthing his rich people….”

“He is ideologically committed to the privatization of public education and to government that serves the rich.”

Now that Barack Obama is a lame duck who can’t run for the top office anymore, it’s as good a time as any to speculate on who will take his place as the Black politician that rich white folks feel they can truly trust. One name stands out: Cory Booker, the 43 year-old Mayor of Newark, New Jersey, whose rightwing background and connections are far deeper and more intensely ideological than Obama’s. Indeed, if there had been no Barack Obama, Cory Booker would have been Wall Street’s choice as the First Black President.

The Lords of Capital love “Cory,” and call him by his first name. That’s how he raised $7 million to win Newark’s City Hall for the second time, in 2010. He has since amassed more than $250 million from wealthy capitalists, including the founder of Facebook, mainly for the Newark public schools. They’re willing to pile all this cash on Booker’s plate because he is ideologically committed to the privatization of public education and to government that serves the rich.

Booker’s national career began in September of 2000, as the key speaker at a Manhattan Institute power luncheon, a launching platform for new stars on the Right. The rookie Newark city councilman had already been vetted by the far-right Bradley Foundation for his efforts on behalf of vouchers for private schools. Railing against wealth redistribution, Booker won the hearts of the rich reactionaries, who bankrolled his first run for mayor, in 2002. Booker lost, barely, but won with even more corporate support in 2006.

Mayor Booker was of great service to his corporate-minded soul mate in the White House, raising hundreds of thousands of dollars for Obama’s reelection campaign. But, one thing Cory Booker cannot abide is anyone bad-mouthing his rich people. So fiercely loyal is Booker to the rich, as individuals and as a class, he recoiled against the campaign’s criticisms of Mitt Romney’s private equity firm, Bain Capital. “I’m not about to sit here and indict private equity,” said Booker, [10]on NBC’s Meet the Press. Of course he wouldn’t – Booker’s entire career is a creation of private capital.

“Booker won the hearts of the rich reactionaries.”

Booker may run against New Jersey’s Republican governor Chris Christie in 2013. If so, it will be a contest among political friends. Booker appeared with Christie and Louisiana Republican governor Bobby Jindal earlier this year at a “summit [11]” meeting for supporters of school privatization.

We had Cory Booker’s number when he first ran for mayor in 2002, his pockets crammed with cash. Back then, we wrote [12] that Booker’s “impressive education served only to teach him the quickest route to the houses of the wealthy. The Young Frankenstein is now plugged in to power, lacking only the national profile that Newark’s City Hall would provide.”

Ten years later, Booker has both the national profile and access to hundreds of millions of Wall Street dollars. And he fully intends to become Obama the Second. You can’t say he hasn’t earned it. By the age of 30, Cory Booker had put together a rich white ruling class fan club of his own. This guy is a world class opportunist, and a rightwing ideologue, too: just the kind of Black man that Wall Street loves and needs.