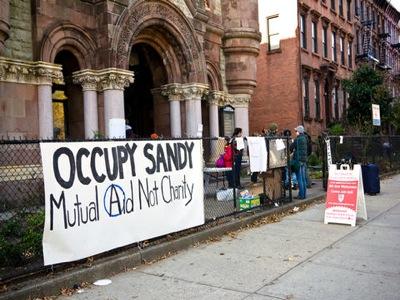 When the Hurricane hit, Occupy movement activists wanted to do good in the hood. However, their mission has inevitably become political as well as humanitarian. “Occupy Sandy illuminates how economic and political power shapes the geography of pain.”

“After the natural disaster, comes disaster capitalism.”
The Occupy Wall Street movement has rediscovered a reason for existence: service to the people. Hurricane Sandy provided the remnants of Occupy with a social service mission, and they responded with remarkable speed and efficiency, bringing aid and a semblance of relief infrastructure to battered neighborhoods in New York and New Jersey. The purpose was humanitarian but, simply by virtue of focusing on those neighborhoods of greatest need, Occupy Sandy illuminates how economic and political power shapes the geography of pain, even in natural disasters.

The Occupy activists have been most vital to the minority residents of New York public housing and places like ocean-swept Far Rockaway, Queens. New York’s subway system may have made a miraculous recovery from the worst damage inflicted in its history, but public housing tenants were largely left to fend for themselves. In Coney Island, until recent days there was no sign of FEMA or the Red Cross or much of a local government presence at all in the waterless, powerless, lightless high rise public housing projects. Residents have been forced to defecate in buckets [6], and then to carry those buckets down many flights of stairs in the darkness. Many of the elderly have been trapped in their apartments.

“The Occupy movement’s rescue efforts have served to point up the political and economic nature of the disaster.”

Occupy Sandy’s hubs for distribution of supplies and services have been a “godsend” to afflicted neighborhoods – in sharp contrast to the calculated callousness of New York’s billionaire mayor, Michael Bloomberg.  The city only launched its so-called “restoration centers” this Tuesday, two weeks after [7] the superstorm hit. Four were opened in Far Rockaway, Staten Island, Coney Island and the Gravesend neighborhood. Three others, in Red Hook, Breezy Point and Throgs Neck-Pelham Bay, will not be operational until later in the week.

Even New York’s corporate media, which are notorious for their fawning treatment of the mayor, have noted the glaring absence of aid to the poor – a logical extension of Bloomberg’s relentless gentrification of the city. The Occupy movement’s rescue efforts, which have been competent and efficient beyond even the activists’ own expectations, have served to point up the political and economic nature of the disaster.

On the New Jersey shore, the Federal Emergency Management Agency, FEMA, quickly showed itself to be more concerned with people control [8], than service to the people. Hurricane victims found themselves treated like “prisoners” in a freezing tent city set up in Seaside Heights. The encampment is surrounded by armed guards who demand ID, even to use the showers. One displaced person said, “We honestly feel like we’re in a concentration camp” – an indication of what FEMA anticipates as its future national security mission.

Some Occupy movement activists believe their role in areas worst hit by Sandy has only just begun. After the natural disaster, comes disaster capitalism, as corporations and their servants in government transform afflicted neighborhoods into profit centers for new development – minus the poor people that used to live there. After Katrina, you don’t need a weatherman to read the warning signs, and know that a storm of human displacement is coming. For Black Agenda Radio, I’m Glen Ford. On the web, go to BlackAgendaReport.com.

A perverse (but very American) riddle