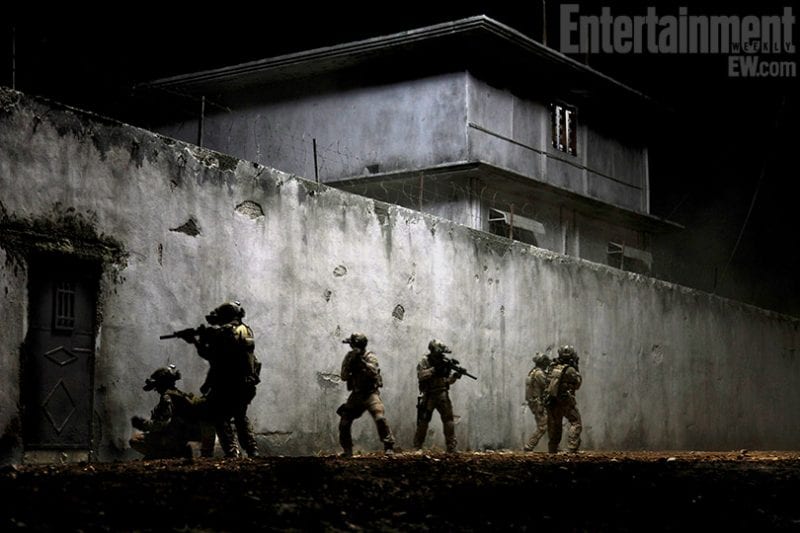 In an age of war, of genetic engineering, of rising fascism, of the propaganda state…

In a world gone mad with terrorism, covert proxy armies, the reign of billionaires, and Kim Kardashian…

…yet another jingoistic American muscle picture smells like an Oscar.”

I’ve long ago given up on Hollywood providing anything in the neighborhood of a “true” story.  I’ve spoken with more than a few screenwriters who feel no obligation toward the actual objective history, or to piecing together what surely happened according to the available data.  Breezily they would prefer to toss out the facts in favor of “story.”  That’s the self-serving claim, anyway.  The reality is that history is always in second position to the “notes” of their superiors, and Hollywood scribes are simply corporate employees.  Any studio executive or producer in the chain can rewrite history at their own whim.  That is the reality of the American movie business, which few would dispute.

Enter Osama Bin Laden (boo, hiss!).  But, the first trailers for the Zero Dark Thirty snuff film actually omitted showing the dark lord bad guy, for some inexplicable reason.  Would he appear as an underdog up against the hyper-charged, well-armed younger Navy Seals?

Very much like the real history provides no actual photographic evidence that bin Laden was even there in Abbottabad, or shot that night, or dumped into the ocean.  In this film, in addition to producers and studio heads, we have the federal government giving notes and purporting to give us the truth (from a demonstrably unreliable source).

Be that as it may, we are certain to get nothing in the way of truth about whom this villain bin Laden actually was, what he did, who he worked for, and with, and what the hell he might actually have had to do – if anything – with the September 11th attacks.  Our glorious hit men are clearly the stars of this tense, gripping, riveting thriller.  Not just good Americans, but the best of the best, these gunslingers ask no questions and go anywhere to silence crucial witnesses who could provide some very damaging trial testimony.

No doubt the Dark Thirty script will provide the he-men no choice, and bin Laden will wield a bazooka while wearing a dirty bomb vest as he cackles maniacally, “Say hello to my little Jihad!  Ha ha ha.”

Maybe not.  We’ll have to wait and see.

Some disturbing subplots, which I don’t expect to find in this patriotic tale of guns and glory—

When asked why there was no mention of the 9/11 attacks on Osama Bin Laden’s FBI’s Most Wanted web page [FBI Spokesman Rex Tomb] said, “The reason why 9/11 is not mentioned on Usama Bin Laden’s Most Wanted page is because the FBI has no hard evidence connecting Bin Laden to 9/11.”
Osama bin Laden fought on the same side as the United States in several conflicts including Afghanistan in the 1980’s, Kosovo and Bosnia in the 1990’s.  Reports indicated cooperation with the US Central Intelligence Agency.

The Pakistani Inter Services Intelligence (ISI) served as the go-between for the US intelligence and the bin Laden network tracing back to the 1980’s.  As bin Laden is alleged to have taken refuge in Pakistan, half a mile from the Pakistani military academy, what was the role of Pakistan’s ISI in protecting him, and who in the US intelligence community knew of this?  Bonus financial subplot – why are we still giving Pakistan billions of our tax dollars and who is trying to stop it?

Bin Laden, a prominent Saudi national, maintained ties to Saudi Arabia as well, and the Saudi government was repeatedly implicated in the September 11th attacks, although never prosecuted for an act of war.  What is the relationship between the Saudi royals, the bin Laden network and those in the United States who would cover up these connections?

Was bin Laden given the green light to be airlifted out of Kunduz Afghanistan in November of 2001, at a time when the US Air Force could easily have shot down any escaping aircraft?

Was Osama bin Laden admitted to a Rawalpindi, Pakistan military hospital for treatment on September 10th, 2001, as reported by CBS?

Was Osama bin Laden treated at a United States military hospital in Dubai, UAE, in July of 2001, as reported by French intelligence in Le Figaro?

No.  Of course the Obama administration won’t be providing details to the eager filmmakers about any of that, not one whit.  Obama’s justice department (sic) actually sided with the Saudi royals and against the 9/11 victim’s families in their lawsuit.  Disclosure was thwarted, and the lawsuit dismissed on the grounds that the Saudis – whether guilty or not – enjoyed “immunity” from lawsuits by pesky citizens whose families were murdered on September 11th.

Don’t expect true stories from the US federal government, nor from the Hollywood motion picture business.  Put them both together, and surely this must be a comedy, a very dark comedy.

JOE GIAMBRONE is editor in chief of the Political Film Blog.

I thought this was a simply marvelous model of cinema analysis, as it should be done. How can critics always forget the political? Kudos to Mr. Giambrone.