Thousands of US troops arrive near Syrian shore on USS Eisenhower

Chemical weapons, anyone? American military might ready to pounce on Syria, only the final pretext is still missing (or is being manufactured as we write these lines).
Trust the American media (and its Western accomplices) to march in lockstep when the signal is given. 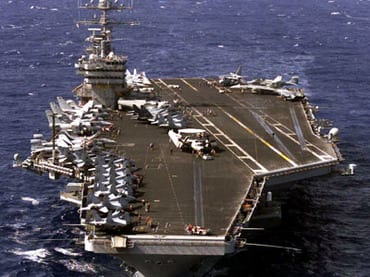 The USS Dwight D. Eisenhower aircraft carrier steams in Mediterranean waters south of Italy during recent NATO maneuvers.  People forget that aircraft carriers are assault vessels, designed to project power in remote locations, not defend the homeland where they are not needed. They are a classical weapon if imperialists and neocolonialists. [RT-(Reuters / Paul Hanna)]

The USS Eisenhower, an American aircraft carrier that holds eight fighter bomber squadrons and 8,000 men, arrived at the Syrian coast yesterday in the midst of a heavy storm, indicating US preparation for a potential ground intervention.

While the Obama administration has not announced any sort of American-led military intervention in the war-torn country, the US is now ready to launch such action “within days” if Syrian President Bashar al-Assad decides to use chemical weapons against the opposition, the Times reports.

Some have suggested that the Assad regime may use chemical weapons against the opposition fighters in the coming days or weeks.

The arrival of the USS Dwight D. Eisenhower, one of the 11 US Navy aircraft carriers that has the capacity to hold thousands of men, is now stationed at the coast of Syria, DEBKAfile reports. The aircraft carrier joined the USS Iwo Jima Amphibious Ready Group, which holds about 2,500 Marines.

“We have (US) special operations forces at the right posture, they don’t have to be sent,” an unnamed US official told The Australian, which suggested that US military troops are already near Syria and ready to intervene in the conflict, if necessary.

If the US decides to intervene militarily in Syria, it now has at its disposal 10,000 fighting men, 17 warships, 70 fighter-bombers, 10 destroyers and frigates and a guided military cruises. Some of the vessels are also equipped with Aegis missile interceptors to shoot down any missiles Syria might have at hand, according to DEBKAfile.

“The muscle is already there to be flexed,” a US official told the London Times about the US military’s presence outside of Syria. “It’s premature to say what could happen if a decision is made to intervene. That hasn’t taken shape, we’ve not reached that kind of decision. There are a lot of options, but it [military action] could be launched rapidly, within days.”

The move comes after NATO made a significant strategic decision Tuesday to deploy Patriot Air and Missile Defense Systems in Turkey on the border of Syria where opposition groups have the stronghold. The defense would be able to protect Turkey from potential Syrian missiles that could contain chemical weapons, as well as intimidate Syrian Air Force pilots from bombing the northern Syria border towns, which the armed rebels control. Syria is thought to have about 700 missiles.

“The protection from NATO will be three dimensional; one is the short-range Patriots, the second is the middle-range Terminal High Altitude Air Defense [THAD] system and the last is the AEGIS system, which counters missiles that can reach outside the atmosphere,” Foreign Minister Ahmet Davutoglu said.

DEBKAfile’s anonymous military sources claim the THAD and Aegis arrived at the Syrian coast aboard the USS Eisenhower.

“The United States now stands ready for direct military intervention in the Syrian conflict when the weather permits,” the news source wrote.

A fraud by any other name: the “Fiscal Cliff” invention— who wins, who loses

Who Made Coronavirus? Was It the U.S., Israel...