Violence in America? We’re all responsible

After Newtown, the NRA points a finger at Hollywood, which is sure to stand up for itself. But what we need is responsiblity. Taken by all of us. 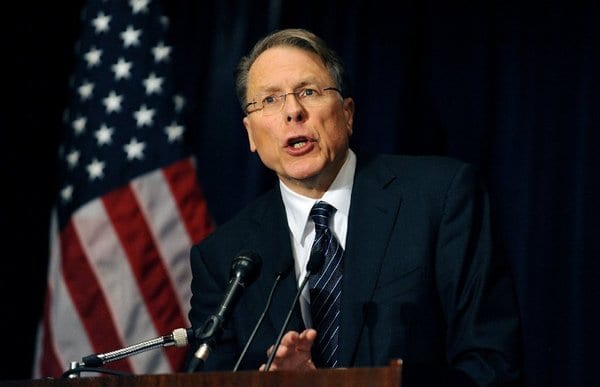 The NRA’s Wayne LaPierre. “Movies and TV shows have a lot to do with the pervasive culture of violence.” For once LaPierre may be on to something. Media’s ubiquitous use of violence for cheap dramatic effect is undeniably toxic, especially to psychologically fragile individuals, but although a powerful factor not the only one we need to address.

Lots of talk about guns and violence but not a lot of nuance
By Mary McNamara, Los Angeles Times Television Critic
December 21, 2012
For years, the National Rifle Assn. has been telling us that guns don’t kill people, people kill people. In the wake of the Newtown shootings, the group has added a twist. Guns don’t kill people; television, film and video games do. Breaking its days-long silence, the NRA on Friday offered its solution to making American schools safer — armed guards — and laid the blame for the seemingly endless cycle of mass shootings on “a callous, corrupt and corrupting shadow industry that sells, and sows, violence against its own people.”

That would be the entertainment industry, which as Wayne LaPierre, the NRA’s vice president, went on to explain, creates violent video games, films and television shows that inundate our youth with “the filthiest form of pornography.”

Citing, rather inexplicably, old films including “American Psycho” (which was an adaptation of a novel), the NRA condemned Hollywood for its addiction to violence.

This is a complete cultural contradiction. If we are to be a society that celebrates firepower, that believes the answer to violence is violence, then it would follow that our art forms would reflect that.

Which, of course, we are and which, of course, they do. As far apart as the NRA and Hollywood may seem from each other politically, they are two of the more powerful forces affecting popular culture. Intentionally or not, their relationship is symbiotic.

As we have been told repeatedly during the last week, the gun lobby is among the most powerful in Washington, able to cow politicians and presidents into policy often in direct opposition to their personal and publicly stated opinions.

The ban on assault weapons was allowed to lapse because even President Obama, so often labeled as ultra-liberal, didn’t want to waste his currency of compromise in a fight he didn’t think he could win. And so, as pointed out in a Times opinion piece by U.S. District Judge Larry Alan Burns, who made a conservative jurist’s case for an assault weapons ban after sentencing Tucson shooter Jared Lee Loughner, half of the nation’s deadliest shootings occurred after the ban expired, including the massacre at Sandy Hook Elementary.

Yet to the NRA, the real villain is the entertainment industry, with its serial-killer serials, bang-bang franchises and first-person shooter video games. Never mind the wide availability of military-style assault weapons; “Batman” and “Call of Duty,” the gun lobby would have us believe, is more to blame for all the recent mass shootings. Reality is merely imitating art.

There is no denying that there is too much violence in film and television today, too many video games centered around high and bloody body counts. But how could this not be the case? We live in a country where the suggestion that civilians should not be able to own weapons designed to kill a large number of people quickly is inevitably dubbed as unconstitutional.

The NRA believes that the ability to own guns and use guns defines us as Americans. So how can it blame Hollywood for creating the kind of films and television shows that do precisely the same thing?

No doubt Hollywood will respond swiftly with words we’ve heard before — violence is essential to drama, art is a way to diffuse the aggressive tendencies we naturally have, imagery cannot become reality if the weapons aren’t available, etc., etc. We will be treated, no doubt, to the sight of two self-important, overly influential groups standing on either side of 26 utterly inexcusable graves, pointing fingers at each other.

Accusations of making a national tragedy political have already begun, but it’s actually worse than that. We’re just making it theatrical, with all the usual suspects reciting all the usual lines, criminally diminishing the lives taken at Sandy Hook to a posturing rerun.

We have all failed. As Americans, as adults, as human beings. As creators and consumers, as politicians and voters. If 20 first-graders shot in their classroom is not proof that things have gotten out of control, then it’s hard to imagine what is. Both sides, all sides, need to take responsibility.

Trumpeting a “more is more” mentality, Americans find it increasingly difficult to contemplate the restriction of anything; many of us can’t even lose the weight that threatens our lives. The NRA’s suggestion that what we really need is armed guards at schools sacrifices not just the notion of a peacetime nation (the terrorists have indeed won, except the terrorists are us) but of civilization itself. Are we really willing to return to the days of the Wild West?

But their point about our art forms, though posed rather hysterically, is not without truth. Too many of our prestige TV shows, our blockbuster films and our popular games revolve around violence. More important, they celebrate people and actions we would deplore in real life.

And while there is value in exploring the outer limits of both human valor and depravity, there is also such a thing as wallowing, of substituting shock for illumination. A high body count, a charming psychopath, should not be a prerequisite for a hit film or show.

In Ang Lee’s beautiful film “The Ice Storm,” adults argue and engage in endlessly self-absorbed drama while one of their children, unnoticed, forgotten, walks down an empty frozen street, where a power line falls and electrocutes him.

This is not the time for the grown-ups to argue; we have been arguing for far too long, and while we argue, our children die. This is the time for us all to take responsibility, make it not so easy for a young man to imagine a hideous act of violence, and not so easy for him to actually commit it.

This seems to be the most divisive issue because it divides even those of us who agree on most politics, but this has become the HOTTEST political issue, and the biggest distraction. I hope we can all respect each other’s views because I’ve seen more friendships end and volatility than ever before. The gun issue is much deeper than the 300 million guns in circulation and gun control. Different questions need to be asked? Why is everyone so paranoid? Why is there so much mental illness? Why are our kids peripheralized and marginalized (so much they want to kill)? Why are there so many broken families? Income and race inequality. Guns are a distraction to the bigger issue of why do people WANT to and are driven to kill. Columbine for example….the two guys were so frustrated for not being accepted and the community rejected them…they lost hope and didn’t care anymore. That is an example of what is happening to too many people in America.

The Truth About Zero Dark Thirty