(Controversial) Dispatch from India—The difference between Sri Lanka & India, and Dreams of Superpowerdom

Will India ever be a ‘real’ super-power?
By Rakhee Ghelani
Crossposted on September 27, 2012 with Intrepid Report 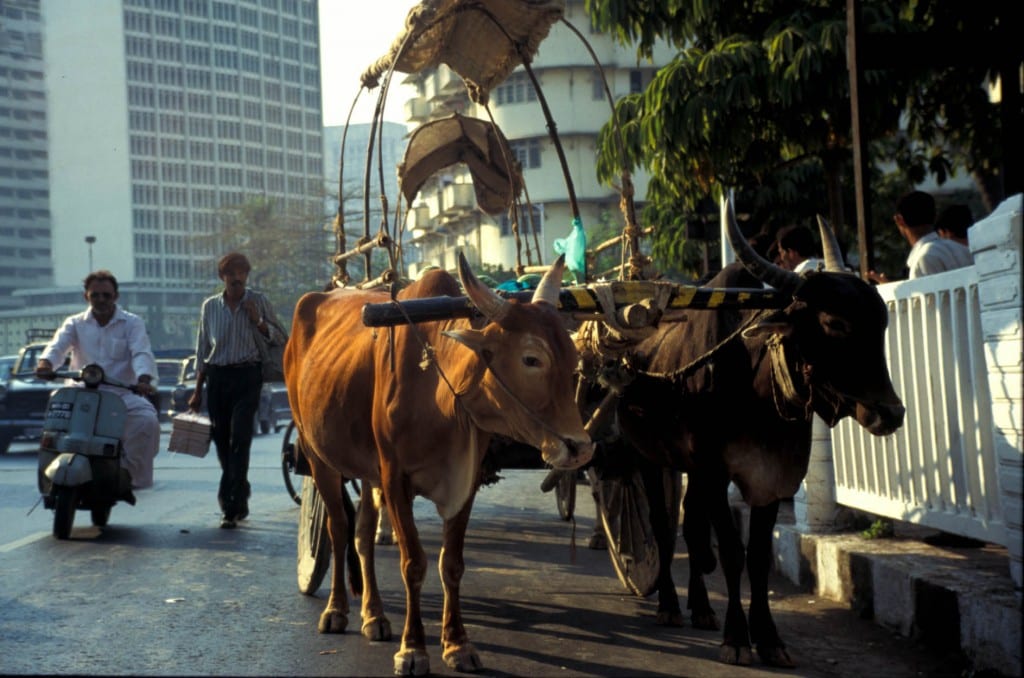 India is packed with contradictions: Here a view of Mumbai’s financial district.

When you live in India, it is almost impossible to go a single day without reading something about corruption. Bribes, kick-backs and ‘gratuities’ are a daily part of living here.

My first official experience of this was when I was travelling in an auto-rickshaw, and the driver accidentally went the wrong way down a one-way street. Unfortunately it was one of the rare times I saw a policeman, who swiftly ordered the driver to stop. After a brief conversation, the driver handed over Rs50 and we were on our way. I asked him whether the Rs50 was a fine, and he explained that the fine was Rs100, the Rs50 was what it cost not to get the fine. The lesson learned: Following the law is not a requirement, and actually it’s not even expected.

Just a cursory look at how people drive here is more than enough evidence that laws either don’t exist or people pay no attention to them, and the only ones who enforce them seem to be those who do so purely to line their own pockets. It is a rather sad state of affairs, and I suspect one of the reasons why India will never be a true “super-power.” They have the brains and the manpower, but there is no discipline, or respect for discipline at all. . . . and no one seems to care!

Whilst not a matter of national importance, one simple example of this is my weekly Circuit class. Circuit is a gym class where there are 12 stations set up and everyone starts at a different station, you then rotate through all the stations by moving one to your right every 60 seconds. In the class I go to each week there is one guy who just does not think he has to follow the rotation, so he moves to different stations every 60 seconds, depending upon what he feels like doing next. It is irrelevant to him that there are 10 other people in the class whose entire work-out is disrupted because he intrudes on their space whenever he feels like it. He has no discipline, has no interest in following simple routine and doesn’t care who it impacts. Sadly, our gym instructor just tolerates his behaviour and makes no attempt to correct it, so the rest of us just have to put up with it.

Yes it is a very simplified way of looking at things, but this is just one example of so many I see every single day.

Another way that India makes it harder on itself to be taken seriously is the levels of bureaucracy. I moved to Mumbai in March and tried to register myself for a PAN card, which means I can be a law-abiding taxpaying citizen. I was not able to apply for a PAN card because I didn’t have a formal address (I have an informal rental arrangement), all my legal documentation (such as my OCI card) shows an Australian address and I don’t even have a license. So I was unable to register. This meant I had trouble getting work, for which I would pay tax, because I couldn’t pay tax legitimately without a PAN card. I would also have trouble getting a formal lease arrangement without a PAN card (and which I needed to get a PAN card). . . . . and the merry-go-round went on (I have now managed to get myself a PAN card, but it took 5 months and a ridiculous amount of paperwork).

Whilst most countries fall over themselves to make it easy for you to pay tax, India manages to find as many barriers as possible to prevent you from complying with the law. It is actually almost easier to do something outside of the law then it is to be a law-abiding citizen. It seems all the bureaucracy is almost designed to stop India from helping itself.

So I find it amusing when I hear people talk about India being a super-power. Yes it has the population and the brain power, but without organisation and discipline and I am not sure India can ever be a super-power. Having high GDP purely because you have a large population doesn’t make you an economic force to be reckoned with, in my opinion, true economic power comes from being able to yield it to your advantage. Add on top of that the overwhelming fear that seems to exist in foreign policy, with foreign direct investment restricted in India. It is almost like India wants to behave like a communist state, controlling what can come in and what people can see, but still tries to call itself a democracy. However the only things that appear to prevail in this democracy is corruption and anarchy.

Whilst I don’t condone corruption, the anarchy and lack of discipline is a big part of what gives India its charm, life is certainly never boring.

Then you add on top of this the social issues that prevail in India. High levels of illiteracy, poverty, lack of sanitation. . . . whilst many are educated, about a third of the population falls below the poverty line (that is about 400 million people, or 25% more than the entire population of the US). With such extreme issues to deal with, and very little visible action to address them, it seems almost like one part of the population is trying to pretend that the other side doesn’t exist. Whilst I appreciate that the problem is huge and not an easy one to resolve, ignorance doesn’t make a great leader, action does.

Colourful, incredible and challenging. . . . yes India is all of these things . . . but a world super-power. . . . I doubt we will see this in my lifetime.

Rakhee Ghelani is an Australian woman of Indian origin who has packed up her life and moved to India. She publishes the blog aussiegirlinindia.com. You can follow her on Twitter at https://twitter.com/#!/rakheeghelani. She also has a Facebook page. Email her at rakhee@aussiegirlinindia.com.

ONE RESPONSE TO WILL INDIA EVER BE A ‘REAL’ SUPER-POWER?

A Reader | September 27, 2012 at 11:12 pm |
Everything you have said in your criticism of India – the maddening bureaucracy that seems to have been put in place not to get work done, but to stall it, the appallingly inconsiderate social behaviour of many people, and other things – is true, except your conclusion. Why is it a good thing to be a superpower, Rakhee? Historically, superpowers have become so by plundering and brutal and bloody conquest, deeds of staggering violence and unfairness, ruining the lives and futures of entire populations. Would that be really a desirable goal?

Please carry on criticizing India – you should – criticism is a very healthy form of free speech and far too little practised anywhere these days for fear of “offending” this, that or other “sensitive” group. However, don’t forget to look at your own Euro-centric bias, wherein apparently lording it over other people whose resources and wealth one has illegitimately appropriated is somehow a good thing merely by the fact that it succeeded.

It might be that it is because you have not yet critically examined the concept of superpower (trashing the environment and consuming the world’s resources like there’s no tomorrow is one very obvious example – in which the superpowers lead the world) that you wish India to be become one.

I would consider it far more important that India provide a decent standard of living to her own people, especially to its most vulnerable, treat women as equal human beings (ha! not in my lifetime) and demolish the despicable caste system than aspire to superpowerhood of the usual kind. Wouldn’t you?

That said, this Indian woman warmly welcomes your regular criticism of India on this forum and anywhere else. I hope that when you look at your other country, Australia, you will be as frank and unsparing – and honest.

What to Make of Barack Obama?

Six months into Ukraine’s collapse, the world has...

U.S. imperialism: Reflections from a Ukrainian...