Home AMERICAN STUDIES Another film with Iran in the crosshairs: An effing bad idea.

What the world surely doesn’t need. 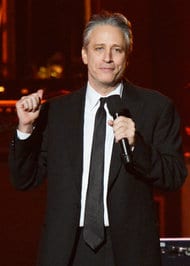 The New York Times headline made me wince:

The news—when read in more detail— was not reassuring. It would seem like one of the most colossal egos in the entertainment world is about to pull an ARGO on us.  No I’m not referring to Affleck, whose Oscar for that perniciously-timed film is the official certification for Hollywood’s willing concubinage with imperial America. I’m talking about Jon Stewart, by far one of the most insufferable and self-impressed personalities in the modern pantheon of cheap idolatry for which American culture will surely be remembered—should the world survive its runaway ignorance and misdirected violence.

The reason for my disgust is that Stewart is about to take a 12-week hiatus from his duties at the uber-adulated The Daily Show to direct a movie whose plot—oh my— he penned.  The movie —”Rosewater”, is reported to be an adaptation of the 2011 book “Then They Came for Me: A Family’s Story of Love, Captivity and Survival,” by Maziar Bahari and Aimee Molloy. Hmm. Hold that a cotton-pickin’  minute.  Captivity? A guy named Bahari? Knowing as I guess you do, that the US and its usual accomplices are desperately looking for a way to provoke a fight with Iran, what country do you think will be cast as the humorless heavy in this picture? Yes, that country. The same country already exploited by liberaloid Affleck to excellent “artistic” returns.

“One of the reasons we are in this business is to challenge ourselves,” Mr. Stewart said [fatuously], “and I really connected to Maziar’s story. It’s a personal story but one with universal appeal about what it means to be free.”  Mr. Bahari’s ordeal is familiar to “The Daily Show” fans — in fact, the comedy program played a role in it. (1)

The blooming of this execrable notion took place in a rather serendipitous manner. According to the Times,

A Canadian-Iranian journalist and documentarian, Mr. Bahari was jailed in Tehran in 2009 for four months, accused of plotting a revolution against the government. Shortly before his arrest, Mr. Bahari had participated in a “Daily Show” sketch, conducted by one of the show’s correspondents, Jason Jones, who was pretending to be a spy. Mr. Bahari’s captors used the footage against him. “You can imagine how upset we were,” Mr. Stewart said, “and I struck up a friendship with him afterward.”

Since ARGO was premised on something like a ruse to fool the Iranians, Stewart’s  premise, also packing identity errors, sounds to me derivative, at best. Not so bloody funny. Let alone that original. How many times are we gonna take credit for rooking the Iranians?

One more requiem for liberalism

With this recklessly ill-timed film, Jon Stewart is now clearly joining not only the lot of imperial apologists (which as Abby Martin suggests—see below—was well prefigured by his fawning over Obama and other Democratic politicos), but also proving for the umpteenth time that liberals are either egotistical assholes with the political acumen of a hedgehog or… thinly-veiled groupies for the imperial status quo. So first Affleck, now Stewart, where will it end, this noxious parade of (shall we say charitably) unwittingly self-indulgent “cinematic art”?

Since Stewart  is a comedian, very much the frat-sort, smart-ass, middlebrow American comedian, the kind that the politically illiterate and almost permanently infantilized Generation X finds so damn amusing, albeit one now afflicted with acute auteur pretensions, we can’t tell at this point where this expensive bauble will end, hopefully in the trash, but we can bet that the Iranians will be once again characterized as fanatical ciphers  or dunces—not exactly the image needed at this point to inject some warmth and respect in the American mind toward that tortured nation.

Well. What else could we expect? This is the rotten Zeitgeist we inhabit, friends. For ill or for ill.

In the final analysis, however, as even a bright 6-year old could tell, war is too dreadful a matter to be left to mere politicians…or  megalomanic buffoons.  Man, where is George Carlin when we need him!

Abby Martin of RT calls out court jester Stewart and his accommodation of Obama.  Hard questions are never asked on Stewart’s Daily Show, particularly when Democrat politicians need votes.  I’ve said previously how Stewart parades a constant stream of establishment war criminals and monsters on his program so they can peddle their books.

PS: While you’re on the NYTImes page, be sure to read some of the comments. They’re a hoot, horrifying. I think you’ll probably be alarmed at how  pathetic, needy and undignified Stewart’s following seems to be. Proof conclusive that far too many people these days are simply functional social morons and that the world is doomed.  I read like 20 comments and then stopped with a mild feeling of nausea.  Condensed, in-your-face stupidity does that to me. At any rate I verified that none of the commenters mentioned the possibility that this new film is just another ludicrous concept likely to increase the tensions and gross misperceptions about Iran and that it should not be celebrated.  And that someone would see the obvious and call Stewart on it, that to pick—of all possible subjects, many much more urgent—this particular plot to sink a pile of greenbacks in it, is simply obscene. Well, about that I suppose I was being way too optimistic.

Jon Stewart – what a scumbag. I really hate that guy. To hell with Stephen Colbert too.

Glad you agree, Joe. As you can see I’m not exactly fond of this clown, nor his enormous followership of idiots.

OMG! Another, self-appointed, Hollywood pompous ass takes to the silver screen to tell the X generation just what to think about a country/situation as potentially devastating, not only for it, but for the powder keg of nations that could be quickly drawn into that Iraq-like, needless war! Neither Stewart, with his ever-present, condescending smirk, and his side kick, Colbert who is equally inane, and equally “wise in his own conceits” dabble at complex, global issues with the depth and wisdom of the insipid laugh tracks that lace both shows. I have tried, unsuccessfully, to watch an entire evening of these two pied pipers. Just had to save my molars from the grinding that their pea-brained versions of the world involuntarily induced!

I have a sister of the “X”age group, and she, like her peers, uses only these shows to acquaint themselves with world events. Scary thought. Just parroting the patronizing pinheads is the extent of her participation in a discussion of any consequence,
She has, she feels, the substitute for reading any book (God forbid) or other media source, pondering if she has can trust the mindset she has been weekly laughing and lapping up; yet she is assured that her comedy show knowledge is the final word. Makes for more endangered molars.

Affleck with his beard, which I guess is the proof of his newly acquired gravitas, plus the aforementioned clown car inhabitants are tinsel town’s answer to why one need not bother their little, chubby brains about anything being seriously amiss in the world. Let’s face it, if a “problem” can be reduced to a laugh line, then, pray tell, what reason is there for their vapid fans to read anything more than the latest pulp fiction rag. True, Bob Hope used to make similar fun of the global circus, but there was a major difference: no one tuned in Bob to learn the elements involved in a crisis, or the absurdity that just laughin’ along with Hope was all that was required to be an educated, informed citizen.

And we wonder why the corporate rulers have Socratic contempt for the populace? Reminds me of a Beatrix Potter tale of the bunnies and Mr. McGregor: The little babes (X’ers) feasted on lettuce (3 stooges of Stewart, Colbert, and Affleck’s “wisdom”) which induced a cozy little nap (license to let their gurus do their thinking) when Mr. McGregor (pick your villian; corporate rulers, tea baggers, neo cons) popped the bunnies in his hunting bag. Lucky for the bunnies of this tale, they survived to frolic another day; we may not be as fortunate in the future due to such abdications of interest and wisdom based, not on the puppet masters plans, but an informed public’s ability to penetrate the perverse lies that lead, as they have in the past, to disasters of an ever increasing severity.