Repugnant Reichwing Site of the Month

This is a Pinochetista site singing the glories of the butcher of Chile, Gen. Augusto Pinochet, and the Chilean (fascist) armed forces. (Spanish helps). 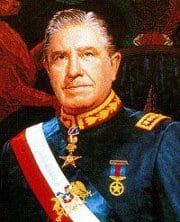 Since everything is upside down in the rightwing mind, the brutal repression of an unarmed civilian population is described as a “glorious battle against international Marxism.” The site’s banner is

(The brave Chilean soldiers of ’73)

The cherry on the cake is provided by a news snippet announcing that Hugo Chavez transferred (stole and handed over) $ 20 billion dollars to Cuba, shortly before dying.  Where this “fact” comes from is not clear.

As befits a chauvinist mentality, the  design of the site is crude, with Chilean flags and pictures of Pinochet and his accomplices injected practically in every quadrant.  As brutally raw as propaganda can get. Chilean reactionaries would do well to borrow a few lessons on how to brainwash people from their spiritual Godfather in North America.