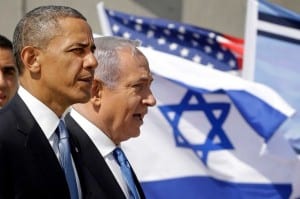 Obama and Netanyahu: expect nothing from the meeting of these two professional hypocrites and warmongers. Taxpayers money squandered to please special lobbies and fool the public. A real peace could have been accomplished decades ago on the basis of elementary decency and justice, but that has never been the platform pursued by America or Israel, pious rhetoric to the opposite. —Eds

Around 15,000 Israeli police provide security. So do US secret service and its Israeli counterpart. Trips like this reflect more show than substance. They cost   millions of dollars.  Taxpayers cover the expense. They gain nothing from doing so. Obama’s entire visit is scripted. His entourage is extensive. His motorcade includes 60 vehicles. Ambulances, fire-fighting trucks and various security vehicles are involved. Contingency plans are readied just in case.

When Obama travels by car, all streets along his route are closed and sealed. Normal life is disrupted.  During his brief Ramallah visit, PA security will protect him. Ahead of his arrival, Palestinians rallied against him. He’s no friend of Palestine.

He’s persona non grata. Signs said so. Others called him an “AIPAC Poodle.” One in Arabic and English said “Obama: Return your Nobel Peace Prize.”  His first address began saying “it’s good to be in Israel again. We stand together because we share a common story, patriots determined to be free people in our lives.”

“We stand together because peace must come to the Holy Land. Even as we are clear eyed about the difficulties, we will never lose sight of the vision of an Israel at peace with its neighbors.”

Netanyahu thanked him for coming and “for standing by Israel at this time of historic change.” What exactly, he didn’t explain.

“Israeli spirit is inspired by American exceptionalism. A world without America would be a darker world. Obama is a historic friend of Israel…The greatest danger is a nuclear Iran. We trust your policy. You have made it clear that your intention is not to contain but to prevent.”

One Palestinian spoke for others, saying:  From 1979 – 2011, US administrations used their veto 43 times. They did so “in support of Israel and against Palestinian rights.”

“They grant military aid to Israel of over $3 billion annually.” Doing so subverts “any positive contribution to achieve justice and rights for the Palestinian people.”

Other protests took place across the West Bank and Gaza. They told Obama he’s not wanted. Mustafa Barghouti is a prominent Palestinian activist. “We are here to send a message to President Obama,” he said. “Our struggle, our nonviolent peaceful resistance will continue until we are free.”

A banner read “Palestinian blood is on your hands, Obama.” Another said “Obama, the Hitler of the 21st century.”

Popular Front for the Liberation of Palestine (PFLP) leader, Kayed Al-Ghoul, said all Palestinian factions believe Obama’s arrival only serves Israel. “At this time, the visit aims to support the newly formed Israeli government and put pressure on the Palestinian leadership to return to bilateral talks that have proven to be a failure.”

Obama’s visit is business as usual. He’s a warrior president. He brings no peace to Palestine. He failed to do so in four years.  His second term will replicate the first. It’s likely to be worse. He spurns Palestinian rights.

“Rarely (have) such low expectations” accompanied a US presidential visit. Israel’s new coalition government “is uniquely unsuited to unravelling the occupation in the West Bank.”

America’s “well-established formula” prioritizes “keeping in lockstep with Israel on anything” security related.  It’s unlikely Palestinians “will ever inhabit anything more substantial than a Bantustan, an imposed solution…”

“(W)hat has waiting for Godot achieved?…The international community is complicit through inaction. The message (Obama) should give (Netanyahu) is that (the status quo) is both dangerous and unpredictable.”

“Israel and (America made) different judgments about how soon and under what circumstances military action should be taken against Iran’s nuclear program.”

Unmentioned is its compliance with NPT provisions. It’s peaceful and legal. Israel’s a nuclear outlaw. America asserts a unilateral preemptive right to use nuclear weapons against targets able to withstand non-nuclear attacks.

Bush and Obama violated NPT provisions. Obama still does. The ABM and Comprehensive Test Ban Treaties are ignored. So are the Biological and Toxic Weapons Convention and Fissile Material Cutoff Treaty. It prohibits additions to current stockpiles.

In 2010, Obama’s Nuclear Posture Review “reserve(d) the right” to use nuclear weapons “that may be warranted by the evolution and proliferation of the biological weapons threat and US capacities to counter that threat.” Bush’s 2005 Doctrine for Joint Nuclear Operations remained unchanged. It removed the distinction between defensive and offensive deterrents.

Washington and Israel threaten humanity. Iran threatens no one. Not according to Post editors. Obama’s “interest lies in persuading Israel not to launch unilateral operations but rather to trust that the United States will intervene when and if that is needed.”

He vowed to prevent Tehran from building a bomb. So did Netanyahu. They say so knowing no plans exist. What most needs explaining goes unmentioned.

Mossad-connected DEBKAfile (DF) claims Iran’s able to develop “two types of nuclear bombs, one fueled by enrichment and the other by plutonium.”  Israel and Washington differ on how and when to react.

“The infamous Iranian-Syrian-Hizballah alliance has not suffered the slightest crack despite Obama’s promise to work it loose. Many Middle Easterners find it is stronger than ever.”

Plans are prepared to do so. NATO commander, Admiral James Stavridis, told Senate Armed Service Committee members that Washington’s considering “a variety of options.” It’s “prepared if called upon to be engaged.”

Whether Obama has that in mind remains to be seen. It’s unclear if he’ll risk war with Iran. He’s waging multiple direct and proxy ones already. The fullness of time will reveal what else he has in mind.

On March 20, Haaretz headlined “US has pinpoint attack ready on Iran, says Israeli official.” An unnamed one said “The Americans are planning for this scenario very seriously.”  They’re “able to mount a focused operation on the Iranian nukes without necessarily sparking a comprehensive regional war.”

How he didn’t explain. If Iran’s attacked, a robust response will follow. Israel’s strategic targets are vulnerable. So are America’s. Greater regional conflict would follow.  Potentially it could go global. Claiming otherwise ignores enormous risks. Attacking Iran is madness.

Cooler heads in both countries understand. It remains to be seen if they’re able to stop what no leader should dare.  Perhaps more than ever in history, a global peace offensive warrants top priority.

It airs Fridays at 10AM US Central time and Saturdays and Sundays at noon. All programs are archived for easy listening.  http://www.progressiveradionetwork.com/the-progressive-news-hour

The Mysterious Why of the Iraq War