Home ANTI-COMMUNISM When Chileans Said “No” to Pinochet

When Chileans Said “No” to Pinochet

Happiness is Skateboarding Over Evil
by SAUL LANDAU 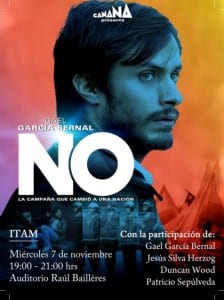 The new film, “No”, takes place in Chile in 1988 as the nation faced a plebiscite — a vote of all citizens –on whether to keep General Augusto Pinochet in power, or not. The Army commander who seized power after a 1973 military coup against elected President Salvador Allende had ruled for more years than Hitler, and had become an old man who gained international notoriety by assassinating, disappearing,” torturing, and sending opponents into exile. But the foreign investors praised his embrace of Chicago Boys economics, a supposedly free market economy whereby proletarios (proletarians) could evolve into proprietarios (property owners), which in practice meant that capitalists could buy Chile’s forests and convert them into chopsticks and tooth picks.

After 15 years of military dictatorship and unbridled capitalism, Chileans got to vote to allow Pinochet to continue his rule. It was “Yes” or “No” — open the political game to a genuine choice. The film focuses on the “No,” campaign waged by the anti-Pinochet forces. To win voters, Chilean TV offered each side a series of 15 minute daily programs.

The old Chilean lefties, who directed the campaign had no experience in selling their side of the story on television; so they choose René Saavedra (Gael Garcia Bernal), a talented ad man, to design the campaign to convince the Chilean majority to reject Pinochet.

Rene designs the commercials in the style he perfected through making soft drink commercials  and soap opera promotions, to use the zeal shown by actors pitching a fizzy drink to deliver a message for a new, happier Chile. But Rene must spar with left-wing ideologues about the contents of the message. All recognize the fact that Pinochet had to concede to the referendum because of strong foreign pressure to legitimize a government that was inherently illegitimate—Pinochet’s coup and post-coup brutality was directed against an elected government, and the Chilean population that supported it.

The film also turns into a contest between two Chilean ad men, both adherents of the Madison Avenue alchemy of selling shit by making it smell like perfume.

Rene lives with his eight year-old son (Pascal Montero), both abandoned by his estranged wife Veronica (Antonia Zegers), a miitant leftist who thinks “No” cannot win because Pinochet will rig the results and intimidate the public. But Rene, despite the threat his involvement holds toward his career in advertising, agrees to take on the campaign.  His boss at the commercial ad agency, Lucho Guzman (Alfredo Castro),  a Pinochetista, colludes with a Cabinet Minister (Jaime Vadell) to direct the “Yes” campaign.

The audience gets a visual education in commercial production, but  this does not substitute for character building and inter-personal stories, the lack of which weakens the movie. The film also gets lost in the commercials and loses the important political context that has generated the story.

We do, however, see convincing scenes of Pinochet’s forces attacking peaceful crowds, using violence as their primary means of persuasion. Rene at one point must fear for his son’s safety, as the “Yes” advisors become anxious when they see that the “No” is gaining popularity in the polls, and begin to threaten people working for the “No.”.

The inner plot, Rene’s attempt to win back his estranged wife, becomes a welcome relief from the drumming of the ad campaign.  His wife still likes Rene, but whatever made them separate remains fixed strongly in her mind—unfortunately, we never find out what it is.  As she rejects his overtures to have sex and reunite, the film makes no attempt to illuminate the barriers to resolving their relationship.

The anti-Pinochet Chileans behind the “No” commercials get irritated by Rene’s peddling their political voice like a commodity. They insist their 15-minute nightly TV allocation should portray Pinochet’s brutality, show his goons doing their  violence and lawlessness, exposing the crimes of the regime.  Rene, the ad man, calculates that selling “No” instead requires commercial TV advertising techniques. He doesn’t belong in the world of ideas, but in the psychological domain of manipulating complacent and frightened buyers to accept his product.  In this way, the movie participates in the trivialization of actual mass mobilizations, door-to-door campaigning, and the vast amounts of literature that anti-Pinochet forces produced for this effort.

Some Chileans, despite their disgust over what Pinochet had done to their people and country, feared his ouster would bring economic chaos, unemployment, massive poverty. Rene thinks about how these factors might reduce voter turnout. He answers these perturbing issues by peddling happiness. His nightly TV spots emphasize the promise of future contentment if No wins. He attaches a rainbow backdrop to the entire ad campaign. Beautiful outdoor scenes feature gleeful dancers and jubilant children, all with their feet moving rhythmically. Oh joy!

As the historic day of the vote approaches, the film centers on the competition between the Yes and No ads, a back-dated Mad Men scenario that overstresses the making of the commercials as the center of history.

A welcome and nicely underplayed strain of humor, however, accompanies the use of contrived marketing tricks and simplistic messages to bring down a dictatorship. The film shows how silly jingles and staged cheerfulness became useful political tools.

That ad man element gets enhanced when the Yes side, aided by Guzman, modifies its campaign accordingly. The film also ends on a note of droll realism. Rene skate boards along the streets, as if to demonstrate that despite his marital woes the boy part of him remains alive and well, and to celebrate the victory of good  — happiness is skateboarding – over evil.

Bernal acknowledges his victory with quiet intensity and  skeptical facial expressions. He, and the film’s director Pablo Larrain, hint that the superficiality of Rene’s advertising schemes will endure beyond the No vote, and etch themselves deeply in Chile’s destiny. Indeed, the newly democratic Chile remained a country where consumerism prevailed, a place divided by class, wealth and power— and the succeeding governments would behave in the world of commodity production and mass consumption where desire produced by advertising acted as a control on social behavior.

Saul Landau is filming (with Jon Alpert) a documentary on Cuba’s anti homophobia campaign. His “Fidel” and “Will The Real Terroris Please stand Up” are available on dvd from cinemalibrestudio.com

The Mainstream U.S. Press Has No Credibility After Iraq