Home ABOMINATIONS OpEds: The entire globe is a battlefield for Pentagon

OpEds: The entire globe is a battlefield for Pentagon 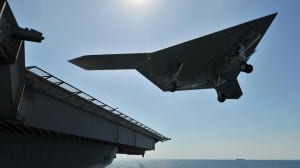 Forget it; the Global War on Terror (GWOT) is not becoming more “democratic” – or even transparent.

US President Barack Obama now pledges to transfer the responsibility of the shadow ‘Drone Wars’ from the CIA to the Pentagon – so the US Congress is able to monitor it.

Until virtually yesterday the Obama administration did not even recognize in public the existence of the shadow ‘Drone Wars’.

The Joint Special Operations Command (JSOC) at the Pentagon – which would then be in charge of the‘Drone Wars’ – is bound to remain secret.

And the Pentagon is not exactly yearning to retouch its definition of a “militant”, a prime candidate to be‘target-assassinated’; “any military-aged male in a strike zone”. “Muslim” male, it goes without saying.

Obama’s rhetoric is one thing. His administration’s ‘Drone Wars’ are another thing entirely.

The President now insists GWOT is no longer a “boundless global war”.

That’s rhetoric. For the Pentagon, the “entire globe is a battlefield”.

That is the operative concept since the beginning of GWOT, and inbuilt in the Pentagon’s Full Spectrum Dominance doctrine.

And if the entire globe is a battlefield, all its causes and consequences are interconnected.

The rules of the game

What’s the difference between a British soldier (the UK is attached to GWOT via the “special relationship”), stationed at an army barracks, gruesomely hacked to death with a meat cleaver in a London street and a Syrian soldier beheaded/disemboweled/cannibalized in “rebel”-held territory by a mercenary Sunni jihadi?

The difference is that the Nigerian-British killer in London is a terrorist, and the jihadi in Syria is a freedom fighter.

What’s the difference between an alleged – never conclusively – proven Chechen-American principally responsible for the Boston bombing and a little Pashtun girl killed by a US drone in Waziristan?

The difference is that the Chechen-American is a terrorist, and the Pashtun girl is not even acknowledged by the Pentagon (and even if she was, she’d go down as “collateral damage”.)

And what if the “collateral damage” is a US citizen, as in Abdulrahman al-Awlaki, the 16-year-old son of Muslim cleric Anwar al-Awlaki, ‘target-assassinated‘ by a US drone in Yemen in October 2011?

It will take 19 months for the administration to admit he was “terminated” – but still with no justification attached.

GWOT’s rules of the game won’t change – no matter how soaring Obama’s rhetoric.

When the US – or “the West” – kills or ‘target-assassinates’ Muslim civilians, that’s never terrorism.

When Muslims supported by “the West” kill other Muslim civilians – as in Syria – they are not terrorists; they are Reaganesque “freedom fighters”.

When Muslims kill Western soldiers – as in London – they’re terrorists.

When Muslims happen to come from regime-changeable Iran and Syria’s government, not to mention Hezbollah, they are by definition terrorists.

And when Muslims are lingering in Guantanamo just because they were in the wrong place at the wrong time when the US invaded a Muslim country, they remain terrorists – the umpteenth Obama promise to close Guantanamo notwithstanding. 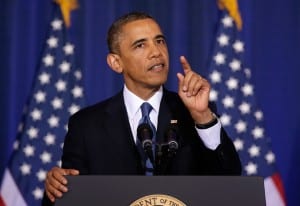 U.S. President Barack Obama listens as Medea Benjamin, an activist from the organization called Code Pink, shouts at him while he speaks at the National Defense University May 23, 2013 in Washington, DC (Win McNamee / Getty Images / AFP)

Take a look at the trailer of Dirty Warsfeaturing Jeremy Scahill’s investigation of Washington’s shadow war. Pay attention to what a Pashtun peasant says: “If the Americans do this again, we are ready to shed our blood fighting them”.

That’s blowback. And not only Pashtuns are ready – but pan-Arabs and Muslims born and bred in “the West”.
The new “lone wolf” catchphrase/hysteria barely identifies the future proliferation of Muslim individuals whose anger finally explodes.

They may not be affiliated with any al-Qaeda-style franchise or copycat. What they do embody is the notion that if “the West” can get away with killing Muslim civilians, there will be a price to pay.

And reasons for a thousand blowbacks are piling up.

The Bush administration’s ‘Shock and Awe’ over Baghdad 10 years ago was Western terrorism inflicted on Iraq’s civilian population.

NATO’s war “liberated” Libya and turned it into a failed state. The result is Sahelistan; northern and western Africa on fire.

Suicide bombers in Niger have just attacked a military camp and a uranium mine operated by French company Areva.

Responsibility was claimed by Mokhtar Belmokhtar, a former leader of al-Qaeda in the Islamic Maghreb (AQIM) who late last year formed the splinter group Signatories in Blood, then led the attack on a natural gas plant in Ain Amenas in Algeria last January, and later may – or rather may not – have been killed.

The bottom line is that the entire globe will remain a battlefield – a self-fulfilling Pentagon prophecy.

So many Belmokhtars to fight, so many Syrian jihadis to support, so many “al-Qaeda” to target-assassinate, so many Muslim lone wolves to track.

Obama’s rhetoric is just a show. GWOT is bound to remain a serpent biting its own tail, eagerly feeding itself till the end of time.

By Pepe Escobar is the roving correspondent for Asia Times/Hong Kong, an analyst for RT and TomDispatch, and a frequent contributor to websites and radio shows ranging from the US to East Asia.

Why Corporate Media Focuses on Benghazi Instead of Guatemalan Genocide

“It is forbidden to kill; therefore all murderers are punished unless they kill in large numbers and to the
sound of trumpets.” Voltaire, opening quote in Scahill’s, “DIrty Wars.”
So, the hot potato of drone destruction is not being tossed on the Pentagon’s plate; ready to enlist the labyrinth of lies and “Wag the Dog” propagandists who will be filling the airways with gruesome video to justify collateral damage and nations shredding devastation. The mob think will not even evoke a grimace, let alone a question if such
carnage is consistent with a nation that falsely parades its humanitarian ethic. Never mind the deeds that would cause any citizen in a drone riddled landscape to revolt; they just need to “Get their minds straight’ about what they perceive as unjustified evil and realize, though they homes are rubble, they are blessed by the perpetrators who will decide their elections, murder with little rationales and leave the victims with their victorious flags waving.. Wonder if THEY feel the “terror” agents are far from the their lands and reside in the United States, and its cohort, Britain. How could they not? And this supposed sanitized version of the drones’ dark deeds by the fig leaf of switching papers and plans to another wing of the military/industrial/congressional complex, is nothing more than a cynical charade that is insulting to what’s left of the public’s conscience.
Just as productive an exercise as re-arranging the deck chairs on the Titanic, and to further the analogy, our ship of state is going to likewise sink by the self-inflicted, “death by a thousand cuts,” endless wars.
We endured 9/11, whose perpetrators are an every growing question, that is endlessly used to justify any actions from that date, till Hell freezes over. Slick trick! The pubic is much like a heroin addict who needs ever stronger injections to retreat to a drug induced, temporary nirvana. Reality begins to nibble at the public’s perception and the drug pusher, the media, inject more mind numbing sophistry to the addicted public addled brains. All that is needed is another Press production that will ease the Socratic mob’s temporary touch with reality. Merely enlisting the “drugs” of
false dichotomies, and scenes of destruction on OUR noble land and the nation slips back into tea bag tyranny.. If the middle eastern
countries followed our twisted, free killing logic, then WE, due to our attacks on their lands, would be enduring a multitude of 9/11’s! Tut, tut, one must remember that WE are “special” and consequences to our militant actions are disallowed from the get go. We have joyfully danced down the rabbit hole of national psychopathy that, building on our faulty foundations of justifications, we march across nations, without even Pottery Barn brains. What terrors await us in our Hamlet like soliloquy of options and “rubs” that will doubtless arrive…