Home AMERICAN STUDIES Guest Editorial: The war on terror and the fate of US democracy

Guest Editorial: The war on terror and the fate of US democracy 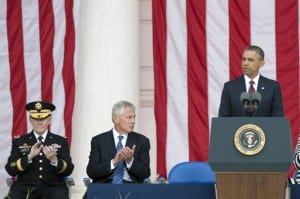 The speech delivered by President Barack Obama at the National Defense University in Washington, D.C. last week has revealed not only a crisis within the Obama administration and increasingly bitter conflicts within the highest echelons of the state, but also, and most profoundly, a historic crisis of class rule.

A decade after the beginning of the “war on terror,” Obama warned, “America stands at a crossroads.” He continued, “We must define the nature and scope of this struggle, or else it will define us. We have to be mindful of James Madison’s warning that no nation could preserve its freedom in the midst of continual warfare.”

In other words, the danger to American democracy comes not from “terrorists”—the catch-all pretext for every action taken by the American ruling class since September 11, including by the present administration—but from within the state itself.

Obama’s speech clearly emerged out of bitter conflicts within the state apparatus. He seemed engaged in a debate, without naming the parties with whom he was arguing. At times he would pause, as if he was waiting for a response. He took an almost passive attitude to the actions of his own administration, as if these were somehow external, somehow directed by forces outside of his own control.

This was not the speech of a confident chief executive, but the representative of an administration under siege, torn by internal contradictions, in which his control over the government seems entirely questionable.

The president repeatedly referred to illegal actions taken. The American government had, he acknowledged, “compromised our basic values—by using torture to interrogate our enemies, and detaining individuals in a way that ran counter to the rule of law.”

By designating them as “counter to the rule of law,” Obama was effectively admitting that actions taken by the United States government—that have continued under his own administration—were illegal, criminal, unconstitutional.

Obama sought to defend these actions, while openly betraying his own nervousness that he was directly implicated in violations of the Constitution, for which he could be held liable.

Obama repeatedly reminded his audience that there were others involved in making these decisions. “Not only did Congress authorize the use of force, it is briefed on every strike that America takes, every strike,” he insisted. “That includes the one instance where we targeted an American citizen.”

Hidden from the American people, preparations are far advanced for an open break with democratic forms of rule in the United States. Under the framework of the “war on terror,” the American ruling class has brought democracy to the very brink of extinction. Under first Bush and then Obama, the executive has claimed vast powers to wage war, spy on the American people, torture and hold prisoners indefinitely without charge, try them in military commissions, and kill anyone, anywhere, including US citizens, without due process.

Little more than a month ago, following the still unexplained bombings at the Boston Marathon, the entire city was placed in lockdown and virtual martial law. As the WSWS noted at the time, “The events in Boston have laid bare the modus operandi for the establishment of dictatorial forms of rule in the US.” Once again, as with the attacks of September 11 that set off the “war on terror,” the bombers were being closely monitored by sections of the state apparatus, and the events were seized on to implement new and unprecedented attacks on democratic rights.

The breakdown of democracy is tied to an immense growth in the strength of the military and intelligence apparatus. These institutions operate as virtual laws unto themselves.

Confirming that issues of civilian-military relations are being intensively discussed within the ruling class, an article appeared in the New York Timeson Monday, penned by retired Army lieutenant general Karl Eikenberry, the former head of Armed Forces in Afghanistan, and historian David Kennedy. Under the headline, “Americans and Their Military, Drifting Apart,” the two authors worry that the expansion of the military is taking place under conditions of “a minimum citizen engagement and comprehension.”

To address this situation, they call for the institution of the draft in some form, before concluding, “While the armed forces retool for the future, citizens cannot be mere spectators. As Adams said about military power, ‘A wise and prudent people will always have a watchful and jealous eye over it.’”

The advanced state of the breakdown of bourgeois democracy, under conditions of perpetual war, has generated intense conflicts among different factions of the ruling class. Within and between various branches of the military, the CIA and FBI, there are continuous factional wars, in which the conflicts within the ruling class are worked out behind the backs of the American people.

While there are sections of the ruling class that would back an open military dictatorship, the break with legality and bourgeois democracy is also fraught with immense dangers. The legitimacy of the American political system is defined by the Constitution.

The American ruling class is destroying the political foundations upon which it has based its rule. They cannot invoke legality when they are confronting challenges to the state from the working class when they are the greatest law-breakers. The more they dispense with constitutional legality, the more illegitimate the ruling elite appears before the great mass of the population, within the United States and internationally.

Yet, despite these concerns, neither Obama nor any sections of the ruling class has anything else to offer. This explains the strange, contradictory character of Obama’s speech.

While voicing concern over the state of American democracy, one of the central aims of Obama’s remarks was to defend the most egregious violation of democratic principles thus far taken—namely, the assassination of US citizens without due process. These operations would continue, he said, with at most a pseudo-legal fig leaf, one or another form of Star Chamber proceedings to rubber stamp the decision of the executive.

As for militarism, while urging an end to a “boundless war on terror,” Obama outlined a series of military operations all over the world. He called for stepping up the arming of the Syrian “rebels,” many of which are tied to Al Qaeda, as part of the campaign to unseat President Bashar Al Assad. At the same time, sections of the American ruling class are trying to extract some of their forces from the Middle East in order to shift towards Asia and a more direct confrontation with China.

In the end, whatever Obama’s public displays of self-doubt, he has neither the will nor the ability to change anything. Efforts by the apologists of the Democratic Party, including the New York Times and the Nation magazine, to present Obama’s speech as a transformative event combine complacency, deceit and naiveté. As if to confirm this fact, Obama stressed on Memorial Day yesterday that the nation was “still at war.”

Moreover, if the most powerful sections of the bourgeoisie and the military/intelligence apparatus ever seriously considered for a moment that Obama was abandoning the program of global hegemony, his administration would come to a brutal and rapid end.

The crisis of class rule and the collapse of American democracy are rooted in, on the one hand, endless war abroad, and, on the other, the uncontrollable and historically unprecedented degree of social inequality.

These developments pose grave dangers for the working class. Not only is it possible for a dictatorship to emerge in the United States, it is already emerging.

The defense of democratic rights is more than ever a class issue. Democracy on the basis of capitalism and imperialist militarism is impossible. To defend its interests, the working class cannot rely on any section of the bourgeois state apparatus or its auxiliary organizations.

The independent political mobilization of the working class, based on a socialist program, is a matter of the highest urgency. This means above all the building of the Socialist Equality Party.

Joseph Kishore is a senior political analyst with wsws.org, informational resource of the Social Equality Party.

Since I can no longer tolerate the corporate news charade, I seldom see that long last fourth estate’s latest version of their parallel universe. No great intellectual loss of world, nation or locale relevancy can be wrung out of that Keystone Cop crap. But, I find this article very disturbing, to say the least. What was the catalyst for such a bizarre address leaves one to wonder. It must have been something far more terrifying than the citizenry could envision. History has taught the nation that the military/industrial/congressional complex has become an octopus that has its tentacles, more under the… Read more »