BROUGHT TO OUR ATTENTION BY KIM BARTLETT, PUBLISHER, ANIMAL PEOPLE 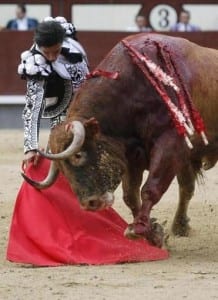 A bull bled heavily during a fight in Madrid earlier this month.

We commend the editors of the Boston Globe for attending to this issue.

SPAIN’S BULLFIGHTING industry has been battered in recent years, a victim of declining popularity and economic recession. The number of “corridas” has fallen sharply, along with attendance at the bloody spectacles, which invariably end with the death of the animal. In 2007,according to The Wall Street Journal, there were more than 1,000 bullfights registered in Spain; this year promoters will schedule only half as many. In a 2011 survey by the ministry of culture, the number of Spaniards saying they attend bullfights had dropped to just 8.5 percent, a new low.

For nearly three centuries Spanish bullfighting has attracted passionate fans. But to modern eyes, there is no romance or honor in bullfights, which are not really “fights” at all, but essentially the drawn-out torture and slaughter of an animal for the enjoyment of a crowd. Like bear-baiting and cockfighting, bullfights appeal to those who find entertainment in brutalizing animals and forcing them to a painful, bloody, violent death. No less a devotee than Ernest Hemingway, who celebrated bullfighting in his 1932 book “Death in the Afternoon,” was honest enough to acknowledge that “true enjoyment of killing” was the key to its fascination and allure.

Happily, more and more Spaniards are rejecting such “entertainment.” Regional lawmakers in Catalonia and the Canary Islands have banned corridas, and for six years Spain’s state-run TV network had refused to air live bullfights. As losses in the industry mount, Spain’s parliament is weighing legislation to declare bullfighting a national cultural institution. That would have the effect of striking down the regional bans and justifying more government subsidies for breeding fighting bulls and training new matadors.

But rather than prolong this ritual, diehards should acknowledge reality: Bullfighting is inhumane, and its time has come and gone. Spain’s contributions to Western culture have been many and glorious. The grotesque spectacle of tormenting bulls to death for fun is not one of them.

Guest Editorial: The war on terror and the fate of US democracy

I was thinking today of how much I hate bullfighting when I heard the Toreadors’ Song on the classical station. This “sport” is certainly grotesque and barbaric. If Spain enacts legislation declaring bullfighting a cultural institution it will show the world that its lawmakers are without a moral compass and sans brains.

Bullfighting is a clear expression of man’s dominion over the animals as presented in genesis: “The fear and dread of you shall rest on every animal of the earth, and on every bird of the air, on everything that creeps on the ground, and on all the fish in the sea; into your hand they are delivered. Every moving thing that lives shall be food for you; and just as I gave you the green plants, I give you everything.'” In Christian nations bull fighting is allowed to thrive, prosper and flourish as an example of courage. The image of… Read more »