Home ABOMINATIONS “Hands Off” Edward Snowden and all Whistleblowers, “Hands Off” the Privacy of Americans

“Hands Off” Edward Snowden and all Whistleblowers, “Hands Off” the Privacy of Americans 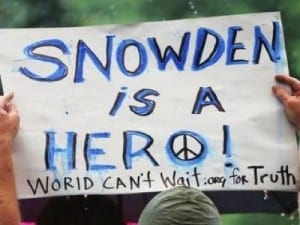 Edward Snowden has the nation and the world a great service in revealing the the government’s mega-surveillance of the U.S. public. “The Obama administration should honor, not punish, him or anyone else who has stood up for the Constitution and against corruption.”

“There has not been in American history a more important leak than Edward Snowden’s release of NSA material.”

As if the Benghazi cover-up of the Embassy attack, the IRS targeting of right wing groups and the AP journalist witch-hunt were not enough, the Obama administration is now faced with explaining to China and the US public why China should stand down on surveillance and cyber attacks while the US steps up it surveillance and cyber attacks . Whistleblower Edward Snowden, a former CIA technician working for the military firm Booz Allen Hamilton under NSA contract, took responsibility for exposing widespread NSA wire-tapping and surveillance against the American people.

Last week, based on information provided by Snowden, the Guardian revealed that the NSA is:

* Collecting telephone records of millions of Verizon customers under a secret court order;

* Under order by President Obama to list possible overseas targets for cyber-attacks by the U.S.;

* Carrying out a data-mining program, Boundless Informant that details and maps, by country, billions of pieces of U.S. and overseas computer and telephone network data.

Snowden told the Guardian, “I’m willing to sacrifice [career, material comforts, and freedom] because I can’t in good conscience allow the US government to destroy privacy, internet freedom and basic liberties for people around the world with this massive surveillance machine they’re secretly building.”

“The chairs of both congressional intelligence committees said the whistleblower involved should face prosecution.”

On June 7th President Obama claimed that the NSA surveillance programs were necessary to protect the American public against terrorism: “My team’s assessment was that these prevent terrorist attacks” and that “the trade-off was worth it.” On Sunday, the chairs of both congressional intelligence committees, Cong. Mike Rogers and Sen. Dianne Feinstein, said the whistleblower involved should face prosecution. Speaking to NBC News, Director of National Intelligence James Clapper claimed the leak has done “grave damage.”

William Binney, a former top official at the NSA, differs. Binney spent almost 40 years there but resigned after 9/11 over domestic surveillance. He served as director its World Geopolitical and Military Analysis Reporting Group and was a senior crypto-mathematician largely responsible for automating the agency’s worldwide eavesdropping. He toldDemocracy Now, “The government is not trying to protect [NSA secrets] from the terrorists, it’s trying to protect knowledge of that program from the citizens of the United States.”

Snowden’s revelations are the most significant act of whistleblower courage since the leaks of Daniel Ellsberg and Bradley Manning. The Obama administration, which has prosecuted the most whistleblowers in history, should honor, not punish, him or anyone else who has stood up for the Constitution and against corruption.

In 1969 Ellsberg, a former U.S. military analyst working for a defense contractor leaked the Pentagon Papers, a report showing that then-President Johnson and his administration had lied to the public and Congress about the Vietnam War. Beginning in April 2010 Manning, an active U.S. Army soldier, leaked classified materials on the Iraq and Afghanistan wars, and diplomatic cables on other issues.

Ellsberg told CNN, “There has not been in American history a more important leak than Edward Snowden’s release of NSA material – and that definitely includes the Pentagon Papers 40 years ago.”  He had waited “decades” for Snowden. “Decades in a sense of seeing somebody who really was prepared to risk his life for his country as a civilian…to show the kind of courage we expect of people on the battlefield.”

The cat is out of the bag thanks to Snowden, like Manning, Ellsberg, and those in 1971 who broke into the FBI and leaked its 1950’s-70’s spying, disruption and crimes against U.S. activists (COINTELPRO.) Thinking people knew the cats were there, but now that we have proof – it’s time to take action.

The Obama administration uses campaigns against whistleblowers such as Bradley Manning, now on trial, and Edward Snowden to instill fear in the American public.  We call upon all people to expose corruption, to insist on government accountability and to organize. Progressive forces worldwide must pressure the Obama administration to stand down on prosecuting Edward Snowden and retaliating against all whistleblowers.

Dr. Marsha Coleman-Adebayo is the author of No FEAR: A Whistleblowers Triumph over Corruption and Retaliation at the EPA is available through amazon.com and the National Whistleblower Center. Dr. Coleman-Adebayo worked at the EPA for 18 years and blew the whistle on a US multinational corporation that endangered vanadium mine workers. Marsha’s successful lawsuit lead to the introduction and passage of the first civil rights and whistleblower law of the 21st century: the Notification of Federal Employees Anti-discrimination and Retaliation Act of 2002 ( No FEAR.) She is Director of Transparency and Accountability for the Green Shadow Cabinet.

King Downing is an attorney and founder of the Human Rights-Racial Justice Center which advocates and organizes around criminal and economic injustice including mass incarceration, police abuse and racial profiling. Downing is a contributor to the following books: Twelve Angry Men and Torture in the US. He is the Chair of the Commission on Corrections Reform for the Green Shadow Cabninet.

Pertinent Essays: The Center Will Not Hold

Tanks for Nothing: NATO Keeps On Demilitarising Itself...