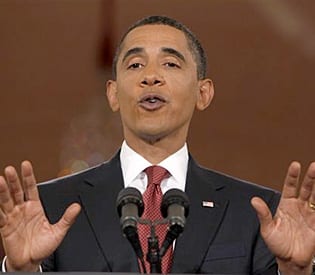 Is this Obama’s U-2 moment? Back in 1960 while the US was flying spy missions over the Soviet Union one of its planes was shot down. President Eisenhower at the time denied its existence two weeks before an East-West Summit. He was proved to be a liar when both the plane and pilot were produced to the media.

Today, we have President Xi of China visiting the White House and being castigated by Obama over its cyber spying. Oops. It may have been embarrassing to both presidents but the American people were fully behind Eisenhower’s foreign policy. Similarly, as outrageous as Obama’s spying on all Americans is, he still has the support of most Americans, especially those who identify themselves as Democrats. Although the line is attributed to many about so many of the world’s dictators, Democrats can also say of Obama, ‘he’s a bastard but he’s our bastard’.

The sycophancy and cult behavior of liberals in America is as much a threat to our ‘democracy’ as is spying on everyone by the White House. We’re not yet at that point of Stasi-mentality where everyday people are urged, cajoled, extorted into turning in their neighbors for questionable activities, associations, or opinions but 2013 gives us a whole different set of reactions fitting our times. The ‘liberal press’ finally poked its head out of the sand with the prosecution and persecution of Rosen of Fox News. Perhaps soon one of the documents to be released by Greenwald and the Guardian will be a list of other journalists whom the president has been monitoring. That will truly wake up the 4th Estate.

Will the sycophants finally realize that they’ve been betting on the wrong horse the whole time? Will it become even obvious to them at some point that their chosen one is one who makes Nixon look like a civil libertarian?

No one knows how this will play out. Are Greenwald, Manning, and Snowden our journalistic version of ‘V’ and Obama our Sutler? Is Creedy our Director of National Intelligence Clapper? It’s ironic that the only establishment voices calling for investigations are coming from the right. Senator Rand Paul wants to take this to the Supreme Court. Forbes Magazine calls for investigations and Clapper’s resignation for lying to Congress. On the other side of the aisle, Democratic Senator Feinstein calls Snowden’s actions an ‘act of treason’.

Towards the end, it was people like Bob Dole who convinced Nixon to resign for the good of the nation, and the fact that it would be generations before a Republican would be president again if he were to have been impeached. Is there anyone on the Democratic side who has the balls to hold their leaders accountable? Wyden and others tried but drowned out by their oaths of office rather than their commitment to the Constitution.

ABOUT THE AUTHOR
Myles Hoenig is an educational advocate and veteran ESOL teacher with Baltimore City and Prince George’s County public schools. His email is hoenigedu@gmail.com.

Combustible from algae CAN replace all petroleum fuels