Besides a large, modern, well-trained army, China also has enormous “people’s militias” that include all able-bodied citizens. Conquering the nation conventionally is an impossibility.

Amitai Etzioni has raised an important question: “Who authorized preparations for war with China?” http://yalejournal.org/2013/06/12/who-authorized-preparations-for-war-with-china/Etzioni says that the war plan is not the sort of contingency plan that might be on hand for an improbable event. Etzioni also reports that the Pentagon’s war plan was not ordered by, and has not been reviewed by, US civilian authorities. We are confronted with a neoconized US military out of control endangering Americans and the rest of the world.

Etzioni is correct that this is a momentous decision made by a neoconized military. China is obviously aware that Washington is preparing for war with China. If the Yale Journal knows it, China knows it. If the Chinese government is realistic, the government is aware that Washington is planning a pre-emptive nuclear attack against China. No other kind of war makes any sense from Washington’s standpoint. The “superpower” was never able to occupy Baghdad, and after 11 years of war has been defeated in Afghanistan by a few thousand lightly armed Taliban. It would be curtains for Washington to get into a conventional war with China. 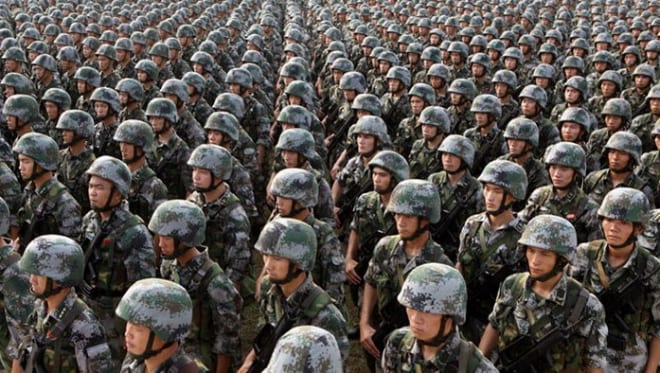 When China was a primitive third world country, it fought the US military to a stalemate in Korea. Today China has the world’s second largest economy and is rapidly overtaking the failing US economy destroyed by jobs offshoring, bankster fraud, and corporate and congressional treason.

The Pentagon’s war plan for China is called “AirSea Battle.” The plan describes itself as “interoperable air and naval forces that can execute networked, integrated attacks-in-depth to disrupt, destroy, and defeat enemy anti-access area denial capabilities.”

Yes, what does that mean? It means many billions of dollars of more profits for the military/security complex while the 99 percent are ground under the boot. It is also clear that this nonsensical jargon cannot defeat a Chinese army. But this kind of saber-rattling can lead to war, and if the Washington morons get a war going, the only way Washington can prevail is with nuclear weapons. The radiation, of course, will kill Americans as well.

Nuclear war is on Washington’s agenda. The rise of the Neocon Nazis has negated the nuclear disarmament agreements that Reagan and Gorbachev made. The extraordinary, mainly truthful 2012 book, The Untold History of the United States by Oliver Stone and Peter Kuznick, describes the post-Reagan breakout of preemptive nuclear attack as Washington’s first option.

During the Cold War nuclear weapons had a defensive purpose. The purpose was to prevent nuclear war by the US and USSR each having sufficient retaliatory power to ensure “mutually assured destruction.” MAD, as it was known, meant that nuclear weapons had no offensive advantage for either side.

The Soviet collapse and China’s focus on its economy instead of its military have resulted in Washington’s advantage in nuclear weaponry that, according to two US Dr. Strangeglove characters, Keir Lieber and Daryl Press, gives Washington first-strike capability. Lieber and Press write that the “precipitous decline of Russia’s arsenal, and the glacial pace of modernization of China’s nuclear forces,” have created a situation in which neither Russia nor China could retaliate to Washington’s first strike.

The Pentagon’s “AirSea Battle” and Lieber and Press’ article in Foreign Affairs have informed China and Russia that Washington is contemplating pre-emptive nuclear attack on both countries. To ensure Russia’s inability to retaliate, Washington is placing anti-ballistic missiles on Russia’s borders in violation of the US-USSR agreement.

Because the American press is a corrupt government propaganda ministry, the American people have no idea that neoconized Washington is planning nuclear war. Americans are no more aware of this than they are of former President Jimmy Carter’s recent statement, reported only in Germany, that the United States no longer has a functioning democracy.

The possibility that the United States would initiate nuclear war was given reality eleven years ago when President George W. Bush, at the urging of Dick Cheney and the neocons that dominated his regime, signed off on the 2002 Nuclear Posture Review.

This neocon document, signed off on by America’s most moronic president, resulted in consternation and condemnation from the rest of the world and launched a new arms race. Russian President Putin immediately announced that Russia would spend all necessary sums to maintain Russia’s retaliatory nuclear capability. The Chinese displayed their prowess by knocking a satellite out of space with a missile. The mayor of Hiroshima, recipient city of a vast American war crime, stated: “The nuclear Non-Proliferation Treaty, the central international agreement guiding the elimination of nuclear weapons, is on the verge of collapse. The chief cause is US nuclear policy that, by openly declaring the possibility of a pre-emptive nuclear first strike and calling for resumed research into mini-nukes and other so-called ‘useable nuclear weapons,’ appears to worship nuclear weapons as God.”

Polls from all over the world consistently show that Israel and the US are regarded as the two greatest threats to peace and to life on earth. Yet, these two utterly lawless governments prance around pretending to be the “world’s greatest democracies.” Neither government accepts any accountability whatsoever to international law, to human rights, to the Geneva Conventions, or to their own statutory law. The US and Israel are rogue governments, throwbacks to the Hitler and Stalin era.

The post World War II wars originate in Washington and Israel. No other country has imperial expansionary ambitions. The Chinese government has not seized Taiwan, which China could do at will. The Russian government has not seized former constituent parts of Russia, such as Georgia, which, provoked by Washington to launch an attack, was instantly overwhelmed by the Russian Army. Putin could have hung Washington’s Georgian puppet and reincorporated Georgia into Russia, where it resided for several centuries and where many believe it belongs.

For the past 68 years, most military aggression can be sourced to the US and Israel. Yet, these two originators of wars pretend to be the victims of aggression. It is Israel that has a nuclear arsenal that is illegal, unacknowledged, and unaccountable. It is Washington that has drafted a war plan based on nuclear first strike. The rest of the world is correct to view these two rogue unaccountable governments as direct threats to life on earth.

Paul Craig Roberts has had careers in scholarship and academia, journalism, public service, and business. He is chairman of The Institute for Political Economy.

How we are impoverished, gentrified and silenced – and what to do about it

The militarization of America