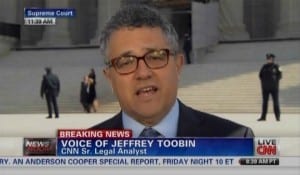 Establishment toady Jeffrey Toobin (a second generation media worm, both his parents worked for the networks) gave the world yet further proof of the utter bankruptcy of the mainstream pundits in this exchange in which he defends the guilty verdict against Bradley Manning. This is the kind of apologist for imperialism that could kill us with his clever sophistry. Fortunately, in Glenn Greenwald he met his match.

Bradley Manning: Another Day in the U.S.A.:, Another Political Prisoner